Coaches Not Ready To Ante-Up 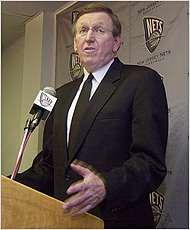 Don Nelson knows when to hold them and feels the NBA should fold them.

In the ongoing Gilbert Arenas fallout, last week the Golden State Warriors head coach said he thinks the NBA shouldn’t allow gambling and recommended the League office “ought to think about doing something.”

ns for players, teams around the League have already started banning gambling on team flights. First up was the Washington Wizards – wasting no time to start the healing process — with the New Jersey Nets following suit.

But not every head coach is ready to roll that dice.

“No, I’m not in favor of that right now at all,” said Los Angeles head coach Phil Jackson on the League possibly instituting a ban on gambling. “I think it’s a P.R. (public relations) thing personally. What do these players do when they get back to their hotels or home spaces? They are going to gamble. Maybe on flights is a better place for them to do it because they are monitored.”

If the League tries to halt a popular past time prevalent on team flights – from card games to dominoes to throwing dice – or under the watchful eye of team officials on a bus ride or in the locker room, it’s getting in to some very shady gray area. The League’s jurisdiction doesn’t extend back to a player’s hotel room, where games are known to go late into the morning.

In the end, this could prevent NBA Commissioner David Stern from passing down a new rule with little policing to support the cause.

Regardless, some coaches wouldn’t be surprised if some sort of mandate was issued.

“It could be a lot of money changing hands with the kind of money these guys are making,” began Portland Trail Blazers head coach Nate McMillan, with reports suggesting some players start bids with $100 bills.

“You start playing cards on a five-hour trip; just think what you could lose in that time in Vegas. And that’s normally when it happens, on the longer trips. If you’re playing cards for four or five hours, that’s a lot of money. But our guys don’t [gamble]. Those are more your older teams. I’ve played on teams where guys got into it, when I was playing. I didn’t play cards. But it was a way to pass time for a lot of those guys. If you didn’t pay up before the next trip, then you couldn’t get in. It was never something that became an issue on the team.”

Unlike McMillan, Jackson said he gambled back in his playing day, but that was a different time in the NBA in many ways.

“I wasn’t very good at it. We didn’t have chartered flights. We flew commercial and Jerry Lucas (Jackson’s roommate in New York and who played with the Knicks from 1971-74) had an incredible memory so he just kept score and there was no money on the floor on a commercial flight.”

Teams like the Boston Celtics and Oklahoma City Thunder have already said they would not take extreme measures to prohibit card games or gambling on team flights, on bus rides or in the locker room. Sounds like you can also add the Blazers and Lakers to that list. As for Mike Brown, the Cleveland Cavaliers head coach; he doesn’t concern himself or his team with the possibility of a mandate.

“I really don’t care,” admitted Brown when asked if he anticipates a ruling on gambling.

“We’ve never had a problem with any of that. If I start to worry about that, all it’s going to do is hurt me because I don’t have any control over it. I don’t worry about that situation because we have our own concerns to worry about. The commissioner is going to handle it and whatever happens, happens. We are privileged to be a part of this thing and it’s unfortunate for the League.”

Ban or no ban, the waves from an unpaid gambling dept that resulted in gun play and landed Washington’s Gilbert Arenas out of the League and placed Javaris Crittenton under investigation, continues to leave the League in its wake.

“There’s no place for that whole situation and incident,” McMillan added, on what occurred with the Wizards.

Wendell Maxey is a freelance writer in Portland and has covered the NBA for the past six years. Featured on FOXSports.com and NBA.com, Wendell can be read more at www.beyondthebeat.net.