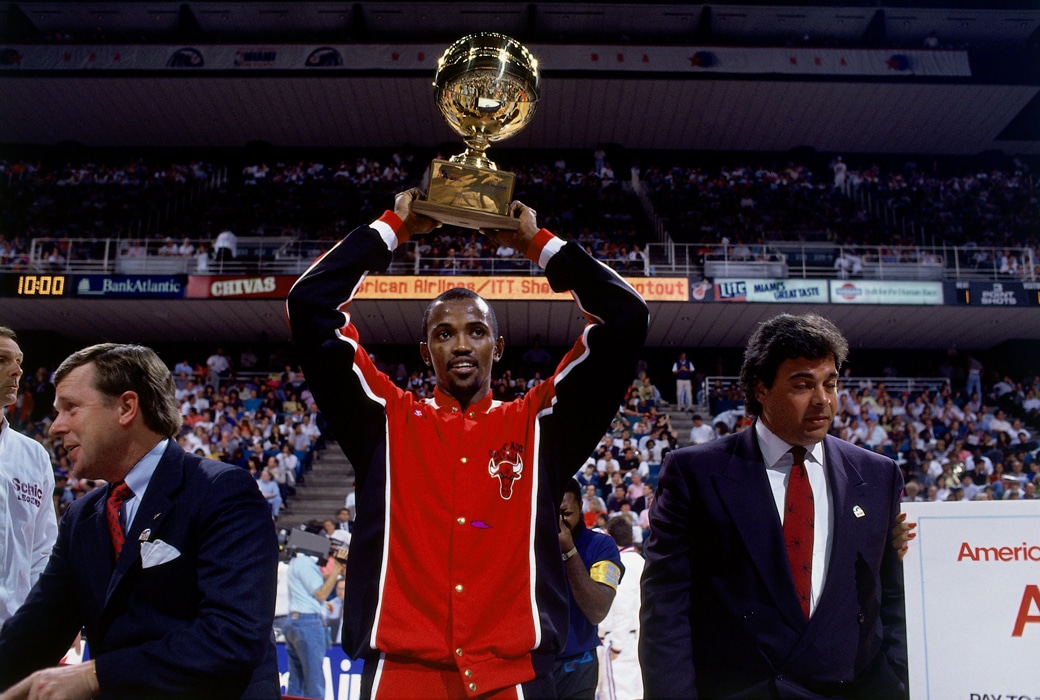 “Searching for the truth.” In a questionnaire given out by the Chicago Bulls PR department in the early 1990s, Craig Hodges used those four words to describe himself.

He is still searching today.

“Searching for the truth is what the end goal is,” he says. “The end goal is equality for people on the planet.”

Hodges believes it was inequality that resulted in the premature ending of his NBA career. He was a two-time champion with the Bulls and one of the best shooters in the game during his prime, going back-to-back-to-back in the three-point contest at All-Star Weekend. But he was out of the League by the age of 32—a result, he maintains, of blackballing by teams due to his activism and outspokenness on issues beyond basketball. Though the forms of protest and surrounding circumstances were different, Hodges’ situation mirrored that of Colin Kaepernick’s.

Instead of taking a knee, Hodges pursued several other means to shed light on injustice. He tried to convince his teammates—and members of the opposing Los Angeles Lakers—to boycott Game 1 of the 1991 Finals, so as to emphasize the lack of black NBA owners and executives. When the Bulls made their championship visit to the White House that October, Hodges wore a dashiki and delivered an eight-page letter to the staff of President George H.W. Bush, highlighting discrimination in America and encouraging the administration to do more for black communities.

“You have a chance in this life to make choices,” says Hodges. He’s now 58-years-old but remains as passionate as ever about sharing his story.

“The choice that I made was: I wanted to be on the right side of history. When people are oppressed, somebody has to stand up.”

Born in Chicago Heights, Illinois in 1960, Hodges was raised in a segregated America. He vividly remembers the rules passed down to him by his aunt and uncle—when he had to be home, where he could and couldn’t go, what he should and shouldn’t say. He remembers, as an eight-year-old boy, seeing his mother and grandmother weeping “like they never had [in their lives]” the day Dr. Martin Luther King Jr was assassinated. He remembers marching in protest of “Whites Only” lunch counters; even if, at the time, he wasn’t old enough to fully grasp the purpose.

As he grew older and more knowledgeable about the civil rights movement, Craig looked back on his childhood and recognized that he had been a part of something bigger. He made it his mission to continue the fight, to never let oppression and discrimination slip from his mind as he led a successful basketball career.

Hodges played for head coach Tex Winter (later an assistant with the Bulls and the mastermind behind the famed triangle offense) at Long Beach State University from 1978-82. Prior to his senior season, the death of Ron Settles—a friend of Craig’s and a running back on the school’s football team—sparked protests among the student body. Settles, who was arrested for speeding in June 1981, was found severely beaten and hanging in his jail cell the following morning. The police maintained that it was a suicide but an autopsy showed Settles had been choked to death.

“It was something that we had to have a firsthand approach on, not a second,” says Hodges. “We can’t be sitting around, watching. We have to put our lives into the movement if we want it to sustain itself and to get to the point where we get solutions as opposed to continuing to have conflicts about the same issue.”

The team allowed Hodges to miss practices so he could participate in protests and other organized events. When Craig transitioned to the NBA in ‘82, his commitment to racial and political issues never wavered.

His perspective on basketball, even while the accolades piled up, did not change. It has always been a “game”—one that he’s grateful for, of course, largely because of the platform it afforded him. He worked hard to be successful but would not let his craft distract from the bigger picture. That meant staying informed and keeping his eyes open to the world at all times and in all places—the court included.

“I’m still having fun [while playing] but at the same time, when we’re standing in line and we’re singing the national anthem, I’m saying, The land of the free and the home of the slaves,” he explains. “We’re still in politics. While we’re sitting there [on the bench], I’m still talking politics. It might be a timeout and I see something that’s going on out there, like, Bro look at that. Come on. You don’t see that?”

Following the 1991-92 season and coming off his second straight championship, Hodges went unsigned. No team would return his calls or offer him a tryout. This came in the wake of his actions at the White House during the summer of ‘91, a moment that highlighted his reputation for being outspoken.

“The purpose of this note is to speak on behalf of the poor people, Native Americans, homeless and, most specifically, the African Americans, who are not able to come to this great edifice and meet the leader of the nation where they live,” Hodges’ note to the President read. “This letter is not begging for anything, but 300 years of free slave labor has left the African American community destroyed. It is time for a comprehensive plan for change. Hopefully, this letter will help become a boost in the unification of inner-city youth and these issues will be brought to the forefront of the domestic agenda.”

At 32-years-old, a career 40 percent three-point shooter with incredible experience was gone from the League for good. He filed a federal lawsuit four years later, charging the NBA with racial discrimination and asserting that “the owners and operators of the 29 NBA member franchises have participated as co-conspirators” in ”blackballing” him ”because of his outspoken political nature as an African-American man.” The claim was eventually dismissed as the judge ruled that the statute of limitations in this case was only two years.

“The ramifications of our actions often times promote things that don’t help us or elevate us,” Hodges says, noting that he missed out on millions and millions of dollars because of his activism.

“One of the things that gasses me, man, is: How could Donald Sterling be a racist and get two billion dollars? But Mahmoud Abdul-Rauf, Craig Hodges and other unnamed players I’m sure who have been discriminated against—our careers ended and [we weren’t] compensated at all for it. We sacrificed.”

Abdul-Rauf is a former NBA player from the 1990s who, like Hodges, fell out of the League under atypical circumstances. In the middle of his career, he made the decision not to stand for the national anthem prior to games, as to him the American flag represented oppression and conflicted with his Muslim faith. When others began to take notice, Abdul-Rauf was suspended. He eventually reached an agreement with the NBA that dictated he stand for the anthem but could pray with his head down while it played. Just two years later, however, the talented scorer (Abdul-Rauf averaged 18 or more points in three separate seasons) went unsigned at 29.

“We have to look at the power structure that doesn’t want change,” Hodges says. “It is so evident that the powerful don’t want to speak to the issue of race, the issue of oppression, the issues of reparations because that’s the bottom line in America—the reason America is struggling so much is because they haven’t done the right things when it comes to poor people, disenfranchised people.

“We sit here now and they say, Oh, you’re free. But are we really free?”

Over the past few years, several basketball players have delivered powerful messages during times of racial and political tension. At the ESPYs in 2016, LeBron James, Carmelo Anthony, Chris Paul and Dwyane Wade took the stage for an opening monologue that addressed the alarming amount of police shootings with black victims.

“Let’s use this moment as a call to action for all professional athletes to educate ourselves. Explore these issues. Speak up. Use our influence. And renounce all violence,” said James.

Members of the NBA and WNBA wore shirts backing the Black Lives Matter movement, despite potentially facing fines for doing so. Utah Jazz guard Kyle Korver published a piece in The Players’ Tribune earlier this week that examined white privilege and urged society to be more conscious and active as a whole.

“Everybody has to carry the mantle where they are,” Hodges says. “That’s the energy that’s vibing today, when I see young white people talking more consciously than I was and considering issues with black people and people of color. That’s the promise that Martin Luther King put in the dream, that that would happen one day.”

With the rise of social media and outlets like The Players’ Tribune, modern athletes have an easier means of communicating messages than Hodges did. Support can be garnered in a quicker, more direct way. Hodges’ story didn’t get the exposure in the 1990s that it would have today. There’s no denying that.

So on a Friday morning in early-March, Hodges, who most recently coached hoops at his old high school, Rich East, is happy to recount his tale to SLAM. He talks passionately about the history of racism in this country and the effect it had on him personally, not only in the NBA. He continues to tell the hard truth to those who will listen and came out with a book about his life entitled, Longshot: The Triumphs and Struggles of an NBA Freedom Fighter. He has no regrets about the choices he made and takes it as a “sign of redemption and grace” to see people like Colin Kaepernick getting paid by the NFL.

“A lot of this stuff is changing as we speak,” he states. “The fact that we’re having this conversation. The fact that social media is what it is. The fact that Colin Kaepernick can get paid when Mahmoud and I didn’t get a dime. That should let us know that people can impact change.

“I just applaud the young brothers and sisters that are standing up and standing on principles that are bedrock and solid,” he adds. “When you stand on the right side of [the truth], there shouldn’t be any fear, because you know you’re doing the right thing.”