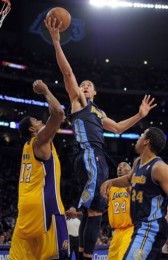 Prior to their first round Playoff series, no one truly gave the Denver Nuggets a chance against the Los Angeles Lakers. And through the first two games of the battle, those views were justified.

The series is now suddenly 3-2, heading back to Colorado, and the Nuggets have been given new life.

Andrew Bynum’s comments prior to last night’s tilt motivated the underdog Nuggets, and the Lakers have a serious fight on their hands.

George Karl’s first order of business when he walked into the Denver Nuggets’ locker room Tuesday was to find video coordinator Nate Anderson. “You put that quote at the end of the film?” the Nuggets coach asked Anderson. Yes, Anderson had done his work, attaching the inflammatory words of Los Angeles Lakers center Andrew Bynum at the end of the Nuggets’ pregame film. “Closeout games are actually kind of easy,” Bynum had said a day earlier. “Teams tend to fold if you come out and play hard in the beginning.”

“A lot of players are arrogant, man,” Nuggets guard Ty Lawson said. “That was an arrogant statement. That definitely did give us fuel and motivation to win this game. We don’t like people saying stuff about us. We all looked at each and other and were like, ‘All right, let’s go.'”

Andrew Bynum’s lackadaisical approach last night made it clear that he truly believed that it’d be easy to put these Nuggets away, and the big fella even stuck to his guns following the loss. He’s the best.

With the OKC Thunder resting comfortably and waiting for their next Playoff opponent, the Lakers must now regroup, and try to win Game 6 in hostile Denver. Regardless of what Bynum may claim, there’s certainly nothing “easy” about that.