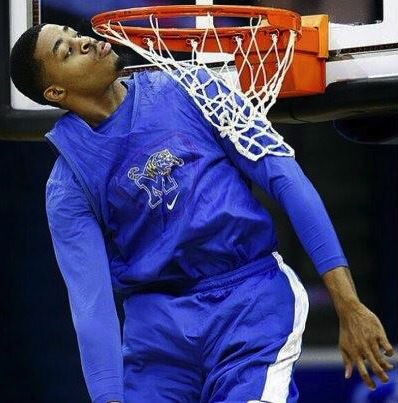 At the Brooklyn Nets’ league-wide combine in East Rutherford, NJ in late May, former Memphis Tiger and current NBA prospect DJ Stephens was trying to impress scouts from every NBA team during a 5-on-5 scrimmage. Amidst a defensive play immediately following a possession-ending block, Stephens swatted another opponent’s shot. As the ball floated towards the first row of courtside executives and scouts, Stephens effortlessly leaped onto the three-plus-foot table to save the ball. The entire room took notice.

“He’s got the ability to make winning energy plays,” Memphis head coach Josh Pastner said of Stephens. “He plays hard on every single possession and is so gifted athletically. If he gets drafted, and the commissioner lets him participate, DJ’s a guy who could easily win the NBA dunk contest. Easily.”

Stephens’ personal coach and pre-draft trainer, 13-year NBA vet Damon Stoudamire, agrees. The long-time Trailblazer labeled Stephens as an “athlete” rather than a player with a set position. “There’s a place for a guy like DJ Stephens, a specialty guy, in the NBA right now,” said Stoudamire, who’s been training Stephens at the University of Memphis practice facility. “I would call him an athlete or a specialty player who can do anything athletically right now and turn himself into something more with hard work.”

But, besides a superhuman athlete, who exactly is DJ Stephens?

Coming out of high school, Stephens was practically a nobody. After growing up in Killeen, TX, and playing at Harker Heights High School, he received scholarship offers from Western Kentucky, North Texas and Sam Houston State. But, in taking too long to mull over his big decision, Stephens ultimately saw all of his limited offers disappear right before his eyes.

“I waited too long to get back to any of [the colleges] and they all pulled their offers,” Stephens remembers. “I started panicking. At that point I wasn’t sure if I was even going to college to play basketball. It was scary for me the first couple of days, but I contacted my AAU coach and he told not to stress and not to worry about it and he would get the word out that I was still looking for schools.”

Stephens wisely followed coach Max Ivany’s advice and played another summer of AAU ball with the Texas D-1 Ambassadors following his high school graduation in 2009—a tactic that’s almost unheard of. After playing just one tournament, Stephens was back on the map of the college recruiting radar. Ivany’s mass e-mail to a multitude of D-I coaches didn’t hurt, either.

Soon enough, Stephens was able to stop panicking; still viewed as a project, he had racked up official offers from Southern Miss, Boise State, Miami, Southern Illinois, Northern Iowa and Cal State Northridge, who were all interested in rounding out their recruiting class with a potential talent like Stephens. But Memphis seemed like the right fit, even though he was considered the worst recruit in Pastner’s first class at the helm of the Tigers.

At the time, Pastner viewed the athlete described in Ivany’s email as simply an extra body for practice, but Stephens relished the opportunity. “I chose Memphis because none of the other schools were nearly as appealing to me,” he said. “The second I picked up a scholarship offer from Memphis I knew I wanted to go there, I had a good feeling that I was supposed to go there. It seemed meant to be.”

This past season, while finally earning significant playing time with 23.6 minutes per game, Stephens averaged 7.6 points, 6.6 rebounds and 2.6 blocks as a defensive-stopper forward for Memphis. As the team’s emotional leader, he led the Tigers to an undefeated run through the Conference USA regular season and a 31-5 overall record, a C-USA tournament championship and a berth to the NCAA Tournament as a 6-seed. But the biggest story of all throughout Memphis’ terrific ’12-13 campaign was a March photo of Stephens kissing the rim that reached every extremity of cyberspace.

”It started off as a joke on senior night,” Stephens said. “All the Tigers fans wanted me to kiss the tiger because it’s like a big thing for the fans at Memphis. I thought to myself that so many people have done that, so I wanted to do something different. So, I thought nobody’s every kissed the rim and after my last home game, when the game was over, I just ran up and kiss the rim goodbye.”

But it didn’t stop there. After Memphis crushed the C-USA Tournament, he did it again in celebration and again at the team’s first NCAA Tournament practice at the Palace of Auburn Hills. CBS aired the picture during a pre-game show, and Stephens became one of the legends of March Madness’ opening weekend. But now, post-Tourney, Stephens is back where he was following high school: a graduated senior that wasn’t too high on the basketball recruiting map.

“It is pretty much like the situation I was in after high school,” Stephens said. “I’m like in between my next step and just working hard and trying to get to my next place.”

Except this time, Stephens doesn’t have to prove to college coaches he’s athletic enough to be given a chance. Now, Stephens needs to convince NBA scouts that he can transition from playing a small-ball four in the C-USA to a two-guard in the L.

“I think I can be a guy like a Tony Allen or a Lance Stephenson in these Playoffs, or a Bruce Bowen. Somebody that can knock down open corner threes and open shots on the floor and then go back and shut down the other teams best perimeter player.”

Before he can even get time on a professional basketball court, Stephens will need to master the little things that come to some NBA guards like second nature. For example, during his workout with the Minnesota Timberwolves, Stephens went through a screen in a roll drill for the first time in his life as the guard. He’ll have to develop a go-to move with his handle instead of relying on his athleticism. And he’ll need to be able to feel comfortable shooting from the outside in front of 20,000 people.

“It’s just something I need to get more confident in,” Stephens explained. “I can shoot the ball, it’s just when the lights are on and I’m out of my element a little bit, it’s a little daunting to me. In college, my whole career, I was playing down low and making post moves, so I’m starting to get more comfortable. But it’s a transition that I have to make and I’m gonna start feeling like every shot is going in once it leaves my hands.

“I just go into every game with a defensive mindset,” the Texan said of his game right now. “I’m an athletic, long guy so I think I have some things I can bring to the table that some people aren’t able to at my size. So, I just try to do the most that I can on the floor, and I think that playing good defense and doing the intangible things is what I can do the most and the best.”

Fortunately for Stephens, that make-up is the kind of player that savvy GMs are looking for in the second round of the Draft. Athletic guys with unwavering motors, low risk guys who could bring high rewards. Players with the coveted NBA delicacy: potential.

When asked what Stephens needs to work on the most in order to reach that potential, Pastner’s answer was short and sweet. “I think he needs to work on being able to dunk three balls at once. I’ve seen him do two, but he should really be able to get three down.”