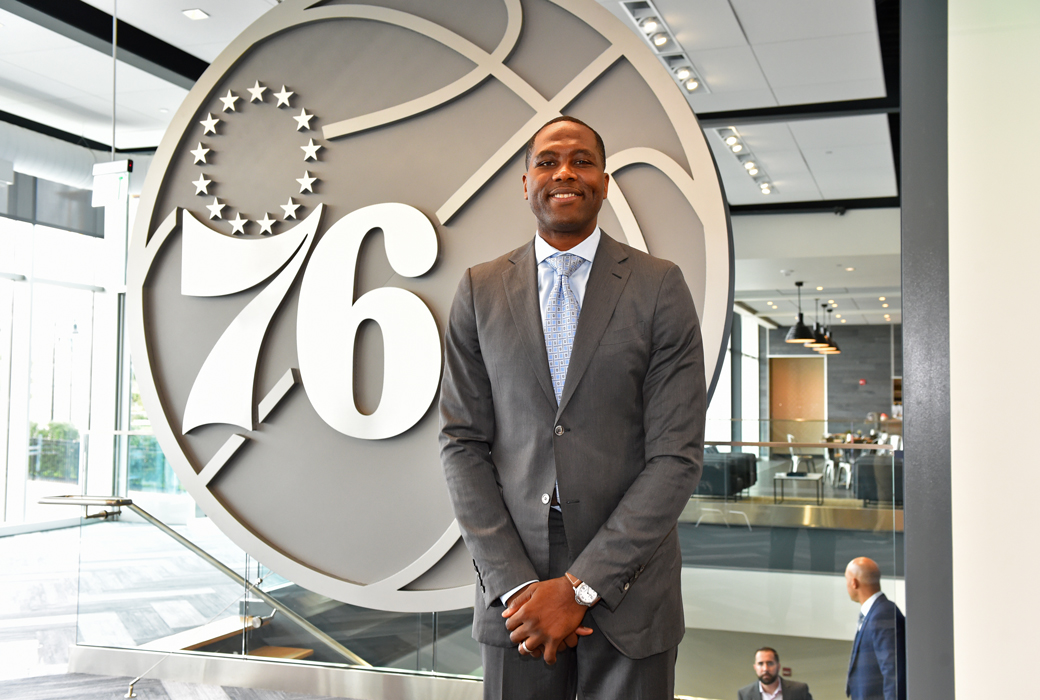 Elton Brand is all about adapting these days, and that’s important. Because part of him still thinks like a player.

“Go play where you want to play when your contract is up,” he says.

But since he is no longer on the court and instead serving as Sixers GM, Brand is really now a company man. The attitude he developed during his 17-year NBA career must be replaced by a more team-centric approach.

“I want to hold on to players as long as I can,” he says.

Brand understands the irony of his statements. He also knows that his days as a mid-range shooting, low-post loving big man are gone. He’s management now, and that means he must go from being a mentor to youngsters to serving as their boss.

It has been a quick ride. Brand retired after the 2015-16 season, during which he played in a mere 17 games for Philly and scored 70 total points, a long way from his days as a two-time All-Star and double-double machine who earned the nickname “Old School Chevy” for his throwback game. Brand never complained about his limited role with the Sixers, because he knew he wasn’t there to put up 20 and 10. He came to the franchise to help a group of players survive the absolute darkest days of “The Process,” a full-on tanking job designed to acquire draft choices and ultimately the pieces necessary to compete for a title. As that season rolled on, Brand understood that his future was no longer in uniform.

After the previous season, Mike Budenholzer, then-president of basketball operations for the Hawks, offered Brand an assistant GM job. Brand turned him down, saying instead that he wanted a “last hurrah.” He got that with the Sixers, along with a strong argument that it was time to move on.

“I was trying to play, but I figured out that I didn’t have it anymore,” Brand says. “I realized I could work basketball instead of play basketball.”

In the ensuing three years, Brand moved from GM of the Sixers’ G League team, the Delaware 87ers (now Blue Coats), to his current position running the big team’s hoop operations. It has been a quick rise, but Brand’s work as an elder statesman as a player, coupled with his apprenticeship in the minors, prepared him well.

With the ’19-20 season underway, Brand has the Sixers in an enviable position (5-0), one that is galaxies away from the 10-win catastrophe during his final season as a player. This offseason, the Sixers re-signed Ben Simmons to a five-year, $170 million deal, tied up free agent Tobias Harris for five years and $180 mil, stole Al Horford away from Boston for four years and another $109 large and dished Jimmy Butler to Miami for shooting guard Josh Richardson. Those four have combined with Joel Embiid in a fearsome starting unit that makes the Sixers one of the top choices to win the East and a trendy favorite to take the whole thing. Brand, who had the good luck to bring his game to the NBA at a time when low-post ball was still in vogue, is now fortunate to have joined the Sixers at a time when they are ascendant again. And, thanks to his efforts, that upward arc could well continue this season.

“We are always looking to get better and improve the team,” Brand says after a frantic-at-times, exhilarating offseason. “I’m happy with the way we have grown, and I’m looking forward to the outcome.”

After one season as a consultant to the Sixers, another as GM of the 87ers, Brand became the NBA franchise’s general manager last September. That means he was part of the deal that brought Butler to town and hugely involved in the most recent offseason. He worked closely with Brett Brown, who was named interim president of basketball operations for the team in the wake of the surreal burner-phone scandal that led to the removal of Bryan Colangelo. With each new day, Brand is more comfortable in his role, despite his relative youth (he’s 40) and only three years of experience in management.

“Being GM [of the 87ers] meant I had to do everything,” Brand says. “We had a smaller staff and a smaller group responsible for determining the roster. We had to run the draft, make our own trades, interview staff members, hire coaches–everything you do on the NBA level. There were just less eyes and less pressure. You still want to win, but your goal is to develop players. It prepared me.”

There have been some crazy NBA offseasons in recent memory, but this past summer may have been the wildest ever. Players formed alliances. The futures of entire teams were altered, some drastically. Superstars relocated. Money flowed freely. It may seem strange to say this, but the NBA Finals appeared to be a mere appetizer to the main course: July’s free agency bonanza.

And the Sixers were hardly bit players in the production. While many fans focused on the drama out west, Brand and his team were highly active. Re-signing Harris was big. Gaining a strong piece (Richardson) for a player who was looking to leave town (Butler) was inspired. And grabbing Horford off the FA shelf generated big headlines and was made even more delectable by the fact that he was leaving the Celtics, Philly’s historic rival.

While fans thrilled to the activity, and of course, the final project, Brand admits that things weren’t always so much fun in the team’s bunker, from the minute the Sixers lost to Toronto in the Eastern Semis until the final signature was secured on a contract.

“There was immense pressure,” he says. “We want to provide the fan base with a championship-level team, and we wanted to get the roster right for the other players on the team. We had Joel Embiid and Ben Simmons, and we didn’t want to waste their time on the team.

“The draft was a lot of pressure, too. We were trying to get some vets, but we also wanted to get minimum [salary] guys who want to be here. We want to win a championship.”

The Sixers came close to that goal last year before losing to the Toronto Raptors when Kawhi Leonard hit a fall-away buzzer beater in Game 7. It was a blow made even more difficult to handle by the fact that the Raptors went on to win it all over Golden State. Sixers fans were left wondering if their team would have accomplished the same feat had they prevailed in Toronto and gone on to subdue the Bucks in the Conference Finals.

Brand doesn’t look at last year as a missed opportunity. Instead, he thinks of it as another step in the pursuit of the Sixers’ ultimate goal. From the moment Leonard’s shot settled in the net, the GM looked at 2019-20 and everything that had to be accomplished to take another step forward. That wasn’t easy, but it was absolutely necessary.

“[The pain of the loss] didn’t wear off, but I knew we had to get to work,” Brand says. “We had exit meetings the next day, and we spoke about what we had to work on to get better. We didn’t want that feeling anymore. It was raw. I wanted to talk to the players when it was still raw.”

The offseason was highly productive for Brand and the Sixers. Even though they didn’t keep Butler in the family, there was a strong sense around the League he and Harris wouldn’t both re-sign. And although Butler had a particularly strong season and was a late-game hero, keeping Harris and adding Richardson and Horford has made the Sixers stronger by most accounts.

As the Sixers participated in the free-for-all that was free agency, Brand kept the vast majority of his focus on building his team. But he couldn’t help thinking about how the League continues to change and grow and how the chaos of July is an entertaining spectacle.

“It is a phenomenon around the world,” Brand says. “There is a mainstream cult following from all angles. I like where we are going and where we are. I’m glad we’re trending in the right direction.”

That’s Brand the GM and member of management speaking. But Brand the player is still not too far removed. He believes the fact that his career ended only three years ago can help him relate to members of the Sixers and other talent around the NBA–even though it’s often his job to decide whether they stay or go. Before he was a GM, he was able to counsel teammates on the realities of the League. They could, and most likely would, be traded. They had to keep working on their games. Because of that, he thinks he can make them understand that he will “play fair” with them. Of course, having agents in the mix can make things a bit complicated, but Brand is committed to getting the right people to join the Sixers organization.

During his three-year management stint, Brand has learned more about leadership and how he wants to help everyone with whom he works, be they players or staff, live their best lives.

“Everybody wants to grow and has aspirations,” he says.

And Brand understands that he would have some developing to do if he were applying for work in the NBA right now. “I wouldn’t be the first pick in the Draft [as he was in 1999 after two years at Duke] if I had the same game I had then,” he says. “I would have had to adapt.”

But Brand certainly doesn’t sound like a grumpy old-timer. In fact, he is a big fan of the current NBA style, even if there aren’t many opportunities for big men who live in the lane.

“The NBA changed 20 years ago when I entered it and 35 years ago when I became a fan,” he says. “I like it. Aesthetically, it looks great. It’s a different game. There used to be more post play and elbows to the face. Now, you see spacing and athleticism and freedom of movement. I like it.

Some of the off-court freedom of movement has positioned the Sixers at the top of the East, with a chance to make a real run at the championship in what looks like the most wide-open NBA in a long time. As he changes his perspective on his basketball life and embraces the pressure of trying to build a big winner, Brand enters 2019-20 with enthusiasm.

“People are excited,” he says. “The sports books, the experts, and the analysts are. They all feel we are up with the best in the NBA.”

And Elton Brand is more than happy to be a part of it.