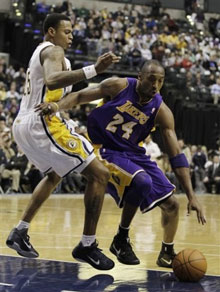 With revenge on their mind, the Los Angeles Lakers turned the Indiana Pacers into the JV equivalent last night. Whatever magic the Pacers happened to find last month when they beat the Lakers vanished last night when the motivated Lakers did as they pleased for four quarters.

“You know, they had a real issue about it,” Head Coach Phil Jackson said about the possibility of getting swept by the Pacers. “I think the Pacers came back and celebrated in the halls at Staples and these guys came back tonight and said, ‘Let’s get after them.’”

So you’re on the varsity team and the coach says that, toward the end of practice, you’re going to scrimmage the JV team. At first your team shows reluctance — “Why do we have to scrimmage them” — but as the practice wears on it’s finally time to show the boys who the men are. Business is taken care of and the JV team learns a lesson: Everybody on the team still has room to grow and the team still has to grow together, even through the shellackings.

Both sides of this analogy were on full display as the Lakers came into Indianapolis to take care of business in the second game of a back-to-back.

The Lakers starters jumped out to an early advantage by moving the ball brilliantly in the first quarter. They finished with 10 assists and 2 turnovers while shooting 14-19 (73.7 percent) from the field and jumping out to a 24-8 lead in the first 6 minutes before the Pacers could even blink an eye. They preserved a 36-22 lead after one.

The epitome of the Lakers’ outstanding passing came when Kobe (just 1-2 with 3 assists in the first quarter) slithered by Brandon Rush on the right side of the paint, which had an opening, but threw a behind-the-back pass to Pau Gasol (28 points, 8 rebounds), who swung it to Lamar Odom (13 points, 17 rebounds) for an easy conversion on the left side.

In the second quarter, the Lakers just kept pouring it on as the starters took turns resting. When the starters come out and do their job in this type of scrimmage, then on a mature team that constantly improves, the reserves come in and they take care of business in much the same way the starters did; with purpose. And in the second quarter that’s exactly what the Lakers did. Steve Blake played the point for all 12 minutes in the period while Shannon Brown, Luke Walton, Andrew Bynum and Matt Barnes all contributed solid minutes. Kobe finished the half with just 5 points on 2-4 shooting from the field, yet the Lakers were up by a commanding 22 points, 59-37.

On the other side of this rout, the Pacers had almost no answers. They fought hard for loose balls at both ends and showed effort, but couldn’t come up with much to show for it. The first quarter display that Los Angeles had shown continued into the second quarter, third quarter and fourth quarter. When Kobe finally decided to get started on the offensive end in the third quarter (8-13 for 18 points) all Indiana could do was play through the Lakers blitz with effort and attempt to whether the storm.

Like that JV team, they just couldn’t come close to cracking the Lakers’ code. From the 7:52 mark in the second quarter until the end of the game the Pacers cut the lead under 20 points for a total of just 9:33 and the closest they came at any point after the first quarter was the final score of 109-94. Getting the lead to single digits last evening wasn’t even close to a reality.

“They were clearly a superior group to our players tonight,” O’Brien said. “They jumped on us and never really gave us a chance to get back in the game. They were obviously going to bring it, and we didn’t match their intensity in the first half.”

When the Lakers took their time and swung the ball they got the shots that they wanted on the offensive end. Defensively the Lakers didn’t do anything differently than they normally do; the Pacers simply helped them out by rushing shots as they tried to climb back to relevancy in this contest.

The promising aspect of this game for the Pacers is that although this game got out of control quickly, and could have been much uglier, they fought through it and didn’t give up even though the Lakers continually kept taking their small rays of hope away.

The Pacers seem to have taken a few steps back from when they beat L.A. just three weeks ago, however. An aspiring playoff team (currently in the seventh position with an 11-13 record) the Pacers biggest concern is their lack of consistency from night to night. Since the big W out west their record is just 3-6.