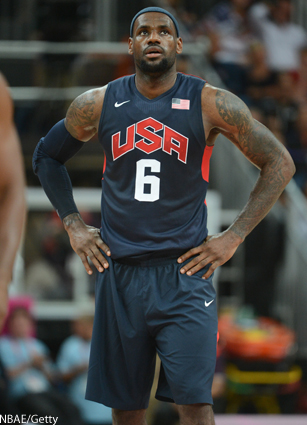 Heading into the 1984 Olympics, the Italians’ talented, deep national team looked primed to invade Los Angeles and topple the host Americans in one of the biggest upsets in sports history.

These aerial Azzurri had already proven themselves giant killers by beating the Soviets in the previous Moscow Games. Since then, the U.S.S.R. had knocked off the U.S. in the World Championship tournament. Italy excelled at half-court or uptempo sets, and was much more experienced than the collegiate American squad, which featured North Carolina’s Michael Jordan, Georgetown’s Patrick Ewing and the first two Razorbacks selected for an Olympic basketball team: Joe Kleine and Alvin Robertson.

“American talent is the best in the world,” an editor of a popular Italian basketball weekly told Sports Illustrated in July 1984. “But their players are 20 years old against men who’ve played 80 games each year for 10 years. The U.S. player has taken maybe 5,000 shots in games in his life. The others have taken maybe 50,000.”

It appeared the world was catching up. And not just archnemesis U.S.S.R, which had beaten the U.S. for gold medals in ’72 and ’82. Puerto Rico, for instance, came within a point of upsetting the U.S. in a fast-paced early round game of the ’76 Olympics.

Some Americans pointed out the Olympic policy of pitting collegians against foreign pro players [deceptively listed as civil servants to technically qualify as amateurs] actually played in the youngins’ favor. The Americans only had one chance to play for gold, whereas these grizzled, chain-smoking Eurovets sometimes got four, even five shots. All those return trips could sap enthusiasm, the theory went, producing a mellow Miroslav here, a jaded Jonas there. Not so for the American college players who understood the rarity of moment, wrote Sports Illustrated‘s Alexander Wolff: “It’s their only opportunity to play together before going their separate ways to seek pro fortunes. They generate an enthusiasm, an authentic Olympic spirit.”

It also helped that the players brimmed with confidence. While coach Bobby Knight and staff actually paid attention to opponents’ names, their players didn’t. “And the arrogance of us in America, we thought we were the only ones who played basketball,” Kleine recalls with a laugh.

Ultimately, homecourt advantage, Knight’s coaching and transcendent talents like Jordan proved too much. The Americans steamrolled to gold in 1984, not even stopping to play Italy, which lost in the quarterfinals to Canada.

At the same time, the writing was already on the gym wall.

Insiders knew even then the world was catching up. Moreover, one European—a pro coach named Boris Stankovic—had already been working since the 1970s to include NBA players in the Olympics. These two trends came to a head in the 1988 Seoul Olympics, when the Soviets beat the U.S. yet again, this time leaving bronze medals hanging from the downcast necks of collegians like David Robinson, Danny Manning and Dan Majerle. The nation’s pride was deeply wounded. “Anytime we lose it gets America’s attention,” says Kleine, an assistant coach at the University of Arkansas at Little Rock. “When we win in basketball, it’s business as usual but when we lose … that’s when it’s like, ‘How could they lose? Americans don’t lose in basketball.'”

Thus began the Dream Team era, which may end next week.

The first Dream Team, of course, got the ball rolling 20 years ago with a tour de force in Spain that stands as one of team sports’ most celebrated runs. It wasn’t merely the 40- and 50-point bludgeonings, however, that to this day thread the first pro American Olympians’ legacy through song lyrics, movie references and video game covers. It’s the way the squad’s combined on-court ability and off-court charisma won new legions of basketball fans, and ultimately NBA consumers, overseas. Headliners Michael Jordan, Larry Bird, Magic Johnson, Charles Barkley and Scottie Pippen had already shone plenty as individual stars; together, they produced wattage brighter than a Barcelona nightscape.

“It was absolute madness,” says Kleine, who played with Jordan and Pippen on the 1997-98 Bulls. He recalls tales of fans “outside the hotel all day and night. Three or four people deep, behind the barricades, just wanting to get a glimpse of them so bad. They had that kind of rock star, Beatles kind of thing going.”

Pau and Marc Gasol, then children, would have been among the local Spaniards transfixed by the Dream Teamers’ astounding athleticism and flashy play. These brothers, along with fellow non-American NBA stars Dirk Nowitzki, Manu Ginobili and Tony Parker, have all said the Dream Team inspired them as young players. Now the Gasols are a major reason Spain is expected to challenge the U.S. for gold in the Olympic basketball tournament that began July 29.

To win, Spain has the unenviable task of beating a U.S. team loaded with experienced superstars like Kobe Bryant, LeBron James and Kevin Durant. It won’t be easy, but the Spanish have a much better chance than any of the original Dream Team’s opponents. Just as other nations closed the gap on American collegians before 1988, so have international players closed the gap on American NBAers since 1992. This was never more apparent than in 2002-2006, when the U.S. failed to finish higher than third place in two World Championships and the ’04 Athens Olympics.

Just like after 1988, the American powers-that-be righted the ship. This time, it wasn’t a matter of importing better players from the NBA for a single summer. Instead, it was more about strategically selecting from already available players, then convincing them to commit to a few summers for the sake of program continuity, all under the aegis of a long-term coaching staff.

Overall, this strategy has worked. The senior U.S. men’s team hasn’t lost a tournament since 2006. Its mega-millionaire players don’t grumble much about receiving relative pittances for their national team play. They say appropriate, patriotic things about playing for national pride and not taking the opportunity for granted. The last few years, in fact, it seemed USA Basketball had pretty much nailed this whole obliterate-the-rest-of-the-world-with-a-marketable-smile-on-your-face thing. The whole enterprise seemed to hum on all cylinders.

Then NBA Commissioner David Stern had to open his big mouth.

Before getting into why Kobe called what came out of Stern’s mouth “stupid,” let me first say this: America has never had a more cosmopolitan commish. The first time my Turkish father ran into Stern, he was shopping in Istanbul’s Grand Bazaar. Stern gave my rug salesman father his business card and, hearing about my NBA interest, told him to get in touch. A few nights later, in an Istanbul arena, we did, wending our way through a courtside security detail during halftime of the first game pitting an NBA and Turkish pro team.

Broadly smiling, Stern emerged from the bowels of Abdi Ipekci arena, shook my hand and before long was asking about the language classes I’d been taking. He even wanted me to throw a few Turkish expressions his way.

In all his travels, Stern keeps noticing one thing in a never-ending quest to make basketball the world’s biggest sport: It’s not yet the biggest sport. Not by a long shot, actually. But Stern’s smart, and he realizes the world’s biggest soccer leagues and organizations have developed business tactics that could also benefit the NBA. In the same way the NBA accelerated the global popularization of basketball by exporting players, coaches and merchandise, so does Stern want to import soccer business strategies to further spread his league’s influence while padding its bottom line.

As inevitable as a Ginobili Euro step or Nowitzki one-footed fadeaway, this process has already begun.

It started in January when the International Basketball Federation (FIBA) changed the name of the World Championship to FIBA World Cup. That name squares nicely with other premier international tournaments: the Rugby World Cup, Cricket World Cup and, of course, the cash cow mother of them all, the FIFA World Cup. The NBA got into the act two weeks ago by announcing it would allow advertisement patches on jerseys starting in fall 2013. Such a change could drop as much as $100 million into league coffers.

In this context, then, it shouldn’t surprise that Stern wants to copy soccer yet again. He has proposed limiting future senior Olympic men’s basketball teams primarily to players no older than 23 years old. That’s the rule in Olympic soccer, where 23-and-under teams compete with up to three exceptions for older players. Which means, most likely, this would be the last Olympics for the likes of LeBron James, Chris Paul and even first-timers like Russell Westbrook and James Harden.

Why the proposed change? Not surprisingly, money. For one, NBA team owners profit from healthy superstars. They fear season-ending injuries during Olympic games or practices. But this happens in offseason workouts and pickup games, too. More importantly, the status quo has the International Olympic Committee, not the owners, controlling the Games’ financial spigot. The owners “don’t get money from the Olympics, so the Olympics isn’t a big deal to them,” Kleine says.

If the 12-team Olympics were no longer the world’s premier basketball tournament, as is the case in soccer, then the NBA could better capitalize on the fame of its best assets. And so, Stern wants to amp up the prestige of the FIBA World Cup by making it the one tournament open to all NBA superstars. It’s likely the FIBA World Cup, already at 24 teams, would expand to an even more lucrative 32 teams, according to SheridanHoops.com. Stern and FIBA chief Patrick Baumann will discuss this development after the Olympics. Expect the NBA to strike an agreement with FIBA providing itself with a healthy revenue stream.

By and large, players seem to despise any attempts to downgrade the Olympics. “It’s a stupid idea,” Bryant told reporters in mid July. “It should be a [player’s] choice.”

Expect foreign players to hate this idea even more. Think about it: Americans, even in an under-23 Olympics world, should still win most gold medals. Not so for international players who will likely end Olympic careers on a frustrating, losing note.

Will Neighbour, a standout basketball player for UALR, assumed he’d have multiple shots to make the senior British national team. A 22-year-old veteran of a few junior teams, he had high hopes of representing his nation this summer in front of a home crowd at London. A shoulder injury and surgery sidelined him from these Games, though, and Stern’s proposal wouldn’t help any future attempts. “Personally, I would not like it at all, because that’s my dream to play in the Olympics,” says Neighbour. “I came closer this year, and then my shoulder happened, so my eyes are already set on 2016. And it would just make everything so much harder for me to make that team.

“I think every country should just give the best that they have and I think that’s why they allowed professionals to play in the Olympics in the first place.”

The prospects don’t look good for guys like Neighbour. What Stern and his inner circle want, Stern et al. tend to get. Even if that happens, though, could this new-fangled FIBA World Cup actually eclipse the Olympics in popularity and prestige, like the FIFA World Cup has in soccer?

Don’t bet on it, says Kleine. “It’s won’t overtake the Olympics. I think the Olympics are too steeped in tradition. It’s just such big deal.”

That may be true. But for an ambitious multinational corporation like the National Basketball Association, profit is a much bigger deal than patriotism.

This article was originally published in SYNC magazine. Listen to the 89.1 FM version of this story at kuar.org. 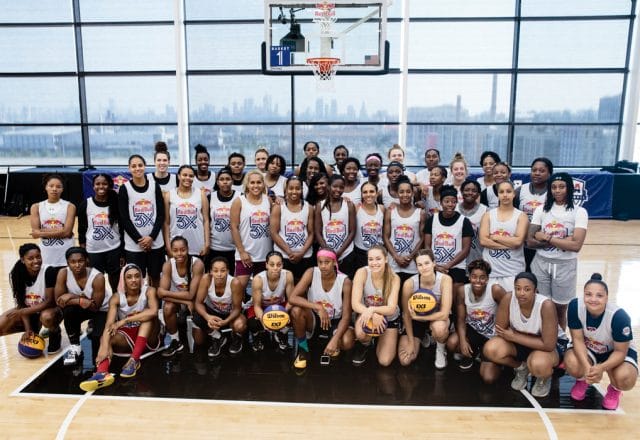