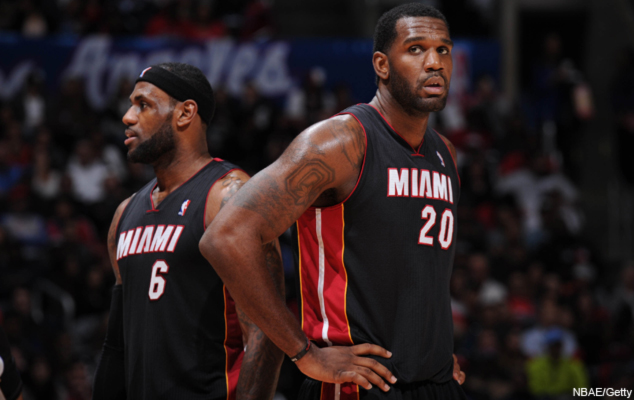 Like every other Boston Celtics home game, the doors to each team’s locker room open for the media 75 minutes before tip off. Usually the Boston media members don’t even acknowledge the evening’s visiting team and stroll right into the Celtics’ locker room. Wednesday night was different. LeBron James and the Miami Heat were in the TD Garden.

About 40 media members surrounded his locker for his pre-game thoughts—of course, he claimed the largest stall the Celtics’ away team room offers. If you could squeeze by the quote-hungry reporters who were nearly overflowing into the hallway to record the King’s voice, the other Miami players are talking quietly among themselves.

Dwyane Wade’s still in the shower. Chris Anderson is staring down at his phone in front of his locker. Rashard Lewis and James Jones mull over a menu to order their pre-game meals. And then there’s Greg Oden just minding his own business, icing down his knees and jammed left thumb after going through a pre-game shooting routine. Incredibly, the days when reporters engulfed the former Ohio State Buckeye, like they currently do with James, are almost decade-old memories.

Oden’s not playing tonight. The Heat are less than 24 hours removed from defeating the Cavs in Cleveland and he has yet to play on the second night of a back-to-back this season.

“It’s tough getting back into it, but you know, I’m getting used to it,” the soft-spoken Oden told SLAM. “The season’s going down and game by game it’s getting better.”

After missing three full seasons and not logging a single NBA minute since December 1, 2009, Oden has appeared in 19 of Miami’s 66 games this season. Prior to missing the Heat’s 101-96 loss in Boston, he averaged 10.6 minutes per night in Miami’s last three games. It’s a process.

“We’re very conscious not to use the word ‘fast-track,’” Heat head coach Erik Spoelstra says. “We signed up in July for this process and it’s been a very patient process.”

Oden sat out the entire 2007-08 season after undergoing microfracture surgery on his right knee. His 2008-09 season was riddled by a series of ankle and knee injuries. His 2009-10 season, which started off extremely promising, ended during a December 5 game against Houston after he went to swat an Aaron Brooks floater.

From there, Oden collected the rest of his rookie contract with the Blazers before undergoing a second microfracture surgery in February 2012. Portland waived him soon after in March, and he then notably took the entire 2012-13 campaign to himself back home in Ohio, regrouping and preparing both mentally and physically for this winter.

“You feel so disconnected from the other guys in the League if you’re not there,” Oden says.

Oden’s work in South Beach began back in August, practicing alongside Heat rookie center Justin Hamilton, currently back with the team after signing a 10-day contract with Charlotte on March 4. Hamilton was recovering, himself, from a hamstring injury.

“We were working out in the summer a lot together, pushing each other every day,” Hamilton says. “We were both trying to get back and get better physically and mentally.”

Oden’s been back in the League for almost eight months now. Again, he hasn’t played in even one third of Miami’s contests but the organization’s mood surrounding his reclamation is more positive than ever. Just this week, Spoelstra basically announced Oden would start at center for Miami whenever he’s available.

“The fact that he’s available virtually every single night, that’s the greatest victory of all,” Spoelstra says. “We have to keep this all in perspective, particularly with the way it’s been the last four years.”

Perspective is on the forefront of Oden’s mind. He knows that he trends on Twitter nearly every game he plays. So what?

One game at a time is about as cliché as it gets, but it’s fitting considering Oden is attempting a comeback unlike anything the NBA has even seen before.

“It’s still a work in progress. I’ve still got a long ways to go,” Oden says. His end goal is to sincerely return to the form of a No. 1 overall pick and potential franchise cornerstone. But embarking on a journey with no benchmarks or realistic finish line is a struggle. “I’m definitely not even close,” he continues. “I can’t predict the future of when I’ll get there. All I can do is work for it one day at a time.”

Yet he’s shown flashes. Just seconds into his Heat preseason debut against the Pelicans, Oden dunked on Al-Fariq Aminu. On January 16, Oden played in his first regular-season game since that fateful night in 2009 against the Wizards. In his first offensive possession, he grabbed a rebound to and slammed home a thunderous put-back jam.

Fast forward to Wednesday, and those sequences are mere baby steps. Oden had 6 points, 3 rebounds and 2 blocks in 14 minutes during that win in Quicken Loans Arena. “Those 14 minutes felt like he played 20,” Spoelstra says. These days, Oden starting and playing 20 minutes a night in this season’s playoffs actually seems like a possibility.

Shane Battier, then with Houston now Oden’s teammate in Miami, says he remembers that 2009 game against Portland vividly. The elder statesmen he is, Battier recognizes how far Oden’s come since he arrived in South Beach.

“I don’t know how many guys who would be able to take off that amount of time and be able to come back and be effective,” Battier says. “He’s worked really hard and it’s good to see his progression.”

The Heat have certainly provided Oden with an opportunity to foster an impactful return.

Being on a one-year minimum contract provides motivation for Oden as well. He sheepishly admits an NBA check is one of the best parts of being back in the League. But “just being on the team, to be around the guys and make this connection,” he says, has made this experience worthwhile. The chance to win a Championship just makes it all that much sweeter.

“GO fits in. He’s a good guy. He cares about the team,” Battier says. “He wants to win and as long as you have that mindset, you’re welcome in this locker room.”

Oden’s return has truly been overshadowed by that Championship mindset and three-peat pressure hanging over Miami. Until this story, there hasn’t been a notable long form dedication to the improbable task Oden now seems likely to accomplish since late January. The headlines in South Beach are focused on the Heat’s battle with Indiana to claim the No. 1 seed in the East. Back around the trade deadline, there was even speculation Pat Riley would bring Andrew Bynum to South Beach as well.

The locker room after Miami’s loss in Boston continues to the beat of that drum. With LeBron ultimately sitting out the contest due to back spasms, the crowd of credentialed press is hovering around Dwyane Wade who had a team-high 17 points. Next, the cameras slide over to Haslem, who hung a line of 14 points, 5 boards, 3 dimes and 2 blocks while starting in place of Oden. Finally, the herd shifts its attention to Ray Allen returning to the parquet for the third time since leaving Boston to join Miami.

Meanwhile, wearing the dress jeans, a light navy-blue blazer and white polo he rocked on the end of Miami’s bench, Oden grabs a handful of fruit from the table in the middle of the locker room, quietly shares a brief back and forth with a Heat personnel and sneaks out the door toward the team bus.

Even with the progress he’s made, Oden’s nowhere near the forefront of the Heat’s season. He’s just filling the role Miami carved out for him and he doesn’t prefer it any other way.

“Considering last year, I was just sitting at home in Ohio, it is a great experience,” Oden says. “I’m just happy to be back.”