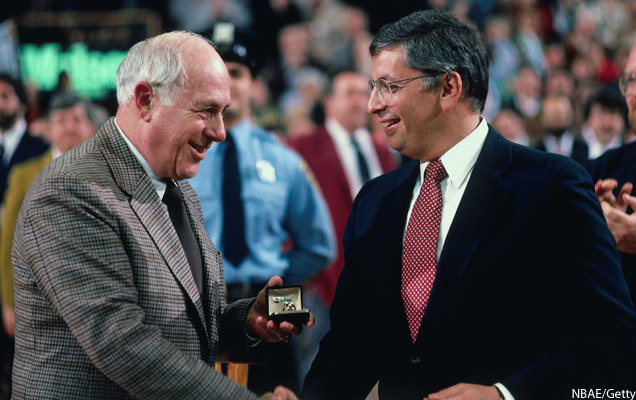 Ever since NBA Chief David Stern announced his retirement, effective as of February 2014, a debate has erupted over the legacy of the man they call Money. Is Stern the greatest commissioner in sports history or merely the luckiest? The argument for calling him the best to sit in the big chair points to a League that has gone from near insolvency to a global brand with the explosion in franchise values and average player salaries as proof positive of his impact. The argument for calling him the luckiest man alive will point out that he came to power alongside Magic Johnson, Larry Bird and Michael Jordan, the three most popular and marketable basketball players to ever walk the earth. They’ll also point to a little thing called cable television, which vastly expanded the reach of the sport.

I would argue that understanding Stern as lucky or good isn’t the best way to measure the man. Stern’s legacy is less a question of luck or skill; clearly, like most successful chief executives, he’s had both in ample proportion. Instead, I think it’s far more helpful to understand Stern as someone who was an extremely effective advocate for corporate power and the needs of ownership. When those needs dovetailed with the interests of fans, for example the expansion of the League, the infusion of global talent or the birth of NBA television, we loved him. But far too often, he presided over decisions that kicked both fans and players in the teeth. What’s good for ownership, in other words, is not necessarily what’s good for us, yet Stern’s reflex was always to stand with the people on his side of the table.

It was good for owners that players who spoke out politically under Stern’s tenure like Craig Hodges and Mahmoud Abdul-Rauf were never able to find a team, making clear to players to know their place. It was good for owners for Stern to be given the power to treat grown players like children, controlling everything from how they dress, to places they’re allowed to visit on the road, to how long players can greet each other and shake hands before game time.

I look at the above ledger and come to my own conclusion that I will not mourn the end of the David Stern era. The best interests of owners more often than not have not translated into the best interests of the game. We watch because the players of the NBA are the greatest athletes on earth and can dazzle with their wicked grace. We watch because it’s a sport where players can surf the emotions of fans and perform the impossible. We don’t watch to see David Stern. Over the last 30 years, the game has become something bigger than life, but the man at the controls has chosen too often to be very small.