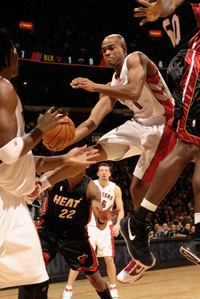 Jarrett Jack may not walk onto the basketball court with Toronto’s plays written on a wrist band but he approaches running the Raptors offense much like a quarter back in football would.

The majority of coaches in football are known for scripting the first 20 or more plays of the game so that they can get a feel for what opposing defenses are running while also ensuring they have the balance of running and passing plays they want.

While chatting with the media after a big win against his Indiana last week Jack shared how he also likes to script the first few plays of the game out in his head.

“Since we have so many guys who can score and so many guys who need touches I look at matchups depending on who we’re playing and I go home and I script my plays,” Jack told the media huddled around his locker.

“I write them down in a sequential order in which I might want to get (Hedo) Turkoglu a shot first and then Chris (Bosh). I make sure I have that memorized going into the game. Then when I’m coming down the court that play pops into my head if I haven’t gotten Turk a shot in two or three possessions. I have plays scripted like my Fav 5 to make sure we get some ball movement and so that I make sure we get the ball into the hands of the people we want.”

While basketball is often played at a break neck pace which can see any given game shift in a few possessions based on how momentum is changing, Jack finds the practice of scripting his plays to be helpful to ensure he gets his teammates touches.

Scripting plays is a habit that started for Jack back in his college days at Georgia Tech after a conversation with former coach Paul Hewitt.

“This is something I started in college because there was so many times in college where I could come down and just pass the ball,” Jack went on to explain. “Nobody knew what we were in and Coach Hewitt would always tell me, ‘Keep your guys organized. Make sure everybody know what we’re doing.’ I try my best not to leave my guys hanging and also keep them involved as well as myself.”

Besides, one of the benefits of coming off the bench is he has the opportunity to get a feel for how the game is unfolding while making a mental note of which players are shooting the ball well or if a player needs to get more touches.

You would think those are all things that come naturally to point guards once they are playing in the NBA, but due to the frenetic pace games are played at it’s tough to keep trac

k of these things.

“It’s crazy how fast the game gets going and then before you know it three minutes has passed and a teammate hasn’t touched the ball,” Jack explained. “That should be a crime in all 50 States and in Canada. You’ve just got to keep surveying the game and assessing how things are going. You don’t want to throw the ball to a teammate when he hasn’t hit a shot all day. Why are you running a play for him when this other guy is 8-8?”

It’s this kind of careful attention to detail that resulted in Toronto getting Rasho Nesterovic nine field goal attempts — the amount he had attempted in his previous six games combined — in a recent game against Indiana. The result? The grizzled vet went 6-9 from the field and scored 12 points in a Raptors win.

This is just another example of the impact Jack is having in Toronto. While he’s posting solid numbers off the bench — 8.2 points and 3.5 assists — his real contribution is coming through his cerebral approach to the game.