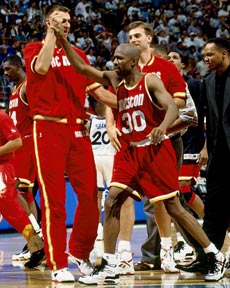 by On the eve of the NBA Draft last Wednesday we were able to catch up with Kenny “The Jet” Smith, a two-time NBA Champion with the Houston Rockets as a point guard. These days Kenny is playing a different kind of lead guard position; his voice has oftentimes been a voice of reason on the Emmy Award winning Inside The NBA on TNT alongside Charles Barkley.

We had the chance to interview Kenny as he was touring on behalf of Taco Bell, petitioning the Federal Reserve to begin re-issuing $2 bills in response to the public’s hunger for the new three items for $2 meal deal. Who better to speak to three items than the guy who held the NBA Finals record for most threes in a game (up until Ray Allen broke it last week, that is).

We chatted about the NBA Draft (which took place the next day), his expectations for John Wall, the aforementioned three-point record that he used to hold and a few things that the casual Inside the NBA fan might not know about the show.

SLAM: With the NBA Draft coming up tomorrow who are some guys who you expect to come in and really contribute off the bat?
Kenny Smith: I mean there’s a lot of obvious stuff, you know, the guys that go in the Top 5–Evan Turner, DeMarcus Cousins–you know, the expectation level is extremely high. Now, if they can meet their expectation levels is yet to be seen but what’s fun about it is that these draft picks are going to be coupled with a lot of the free agents with those same teams.

SLAM: And do you see any of those playing a factor?
KS: I think that’s gonna play a big factor because a lot of these teams are building themselves for free agency and gearing their draft picks around that as well. So this is the most unique–this has never really happened–in the history of the game with so many teams. Normally its like one or two teams that do this but you probably have about ten teams that are doing this same thing.

SLAM: You used to play point guard. What exactly do you see John Wall doing in the NBA, do you see him changing the point guard position? What do you see?
KS: No one, the only one that changed the point guard position’s name was Magic Johnson. But I think what he is able to do is first I think he has a great enthusiasm for the game, which is really infectious. I think his enthusiasm makes him an infectious player. I think the one thing that’s difficult that he’s going to have to learn is the fact that he’s a 19-year-old guy telling a 32- or 33-year-old man, who’s done it before, “No, you’re not getting the ball. This is when I’m gonna give it to you and this is what we gotta do.” Talking to men instead of his peers.

SLAM:And speaking of Kentucky, how about Rajon Rondo? How has he turned in to one of the League’s best point guards?
KS: Well, he’s put himself in an elite status because of his decision making. The difference b

etween the average player and a good player, a good player to a great player isn’t the fact that who shoots better, who can dribble faster, who’s smarter, its all about who makes good decisions at that level and when do you make them

SLAM: A few weeks ago you still held the NBA record for most three-pointers made in a single NBA Finals game. How does it feel to pass the torch to one of the best shooters to ever play the game?
KS: I didn’t want to pass it, you know I didn’t want to give it to him. Its a record that nobody talks about until you know, somebody got hot in the Finals. No one walks around saying they have the record for 3-pointers made in an NBA Finals game, you know they don’t talk about it like that. Its fun to have that kind of record and its fun when somebody approaches it and I wish he would have tied it instead of broken it [laughs].

SLAM: Of course!
KS: Especially when he goes 0-18 the next night. It happens that way though, basketball is about adjustments and changing things up.

SLAM: So me personally, I know that I’m a big fan of Inside the NBA. Its a great show, its Emmy Award winning for lots of reasons. You have great chemistry when your discussing basketball, you look like just another group of guys talking about the game, you know?
KS: I think the one thing that we look at it as is that we’re just three guys talking sports. We’re not trying to play up to any camera or you talk for 15 seconds and I’ll talk for 15 seconds, that’s not how real conversations go and we want that real feeling on the air.

SLAM: Exactly and I think that’s a something everybody appreciates. Tell me something about the show that a lot of people might not know just by watching it.
KS: They probably wouldn’t know that everything that goes on on television spills over in to the green room and on our flights. It’s a continuous conversation more than what we’re about to do. The conversations continue on to the set and then all of a sudden we’re on television. People think that we just kind of come on and then we go but it doesn’t happen that way.

SLAM: I’m a big Charles Barkley fan. Tell me something about him that people might know about him behind the scenes of the show.
KS: He’s Felix Unger and I’m Oscar Madison.

SLAM: [Laughs].
KS: He is a neat [pause] freak. Almost compulsive. Almost. He’s up there.

SLAM: Wow.
KS: He does carry his own set of wipes on his desk.

SLAM: That’s something I definitely couldn’t have guessed.
KS: [Laughs].

SLAM: Kenny thanks a lot for you’re time. We at SLAM appreciate it. Enjoy the Draft!
KS: Alright thanks Jeremy.