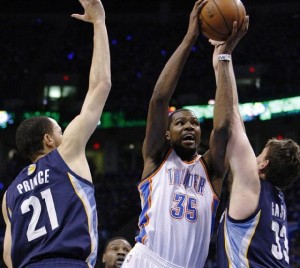 He did everything a superstar is supposed to do to ensure a Playoff win — 36 points (on 11/21 shooting from the field), 11 rebounds, 9 assists and multiple defensive plays in 42 minutes. But it still wasn’t enough.

Kevin Durant’s one-man show against the Memphis Grizzlies has the OKC Thunder all even in the second round of the postseason, and facing the daunting task of winning on the road.

The Grizz defense was its usual smart, tenacious self, but they couldn’t stop KD. But that didn’t doom them, as they put the clamps on Durant’s teammates and escaped OKC with a hard-fought 99-93 win.

Per the Oklahoman and SI:

The harsh reality is that in this series against these Grizzlies, Durant might not have enough to carry the Thunder to the next round. But he is going to give it everything he has. “I can carry as much as Coach can give me,” Durant said.

“As a leader, I’ve always got to stay positive,” Durant said. “It can’t ever look like the series is over just because it’s 1-1 and they beat us at home. It made it a little tougher on us but we always like a fight and we always like a challenge.” […] “The kid has the ball in his hands a lot and he is taking a bunch of shots,” Lionel Hollins said. “We knew we had to take away some other people … We pretty much did that.”

Mike Conley’s near triple-double (26 points, 10 rebounds, 9 assists and clutch shooting in the fourth quarter) was the story for the Memphis Grizzlies last night, but they earned a split on the road using a familiar formula: a balanced attack on both ends of the floor. Kevin Durant, meanwhile, could only count on Derek Fisher’s improbable hot shooting, and seemed to run out of gas down the stretch.

With the series shifting to Memphis for the next two games, KD can expect to shoulder even more of the burden. Russell Westbrook isn’t available, and head coach Scott Brooks knows he has to ride his superstar. Durant says that’s fine:

“I made those shots last game. I missed them this game,” Durant said. “I’m going to keep taking them. I’m going to continue to be aggressive, no matter if I make it or I miss it.” […] “I always can do more,” he said. “I’ve got to put my teammates in better position to score. I turned the ball over too much. I thought I could’ve made better passes. I shot some shots when I should’ve drove, when I should’ve got closer.”