The MVP lit up for 39 and 16 to eliminate the Clippers. 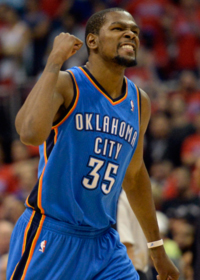 With 8:34 left in the fourth quarter, Bradley Beal ripped a rebound away from Roy Hibbert, sprinted up the floor and drained a 3-pointer to give Washington their first lead of the second half. That play seemed to encapsulate the entire Pacers season that had been in constant turmoil since February.

Indiana bent, but didn’t break. Instead, they snapped right back and responded just like a no. 1 seed should, sending the Wizards packing for the summer and setting a date with Miami in the Eastern Conference Finals for the second straight season.

The Pacers did it using a combination of the things that got them that top seed in the first place: defense and veteran toughness from a team that’s been here before. Indy shut down driving lanes and outside shots, limiting Washington to 39 percent shooting. They controlled the pace for the majority of the game, keeping the Wizards to 10 fast break points.

No surprise, but the toughness was supplied by the toughest dude in the Indiana locker room, David West. The 10-year vet hit big shots every time the Wizards made a push in the second half. West finished with 29 points on 13-26 shooting, dropping in 18 after halftime.

“I just didn’t want us to lose this game,” West told Doris Burke after the final horn.

Lance Stephenson was fearless all night as well, putting up his best game of the series in the closer. Born Ready went for 17 points and 8 assists, setting the tone early by driving right into the heart of the Wizards’ defense. Indy was able to survive a lackluster effort from Paul George (12 points, 4-11 shooting, 5 rebounds), partially thanks to their other All Star, Hibbert, playing the part. Hibbert finished with 11 points and 7 rebounds, but most importantly deterred countless attempts at the rim while finishing with 3 blocks.

Washington didn’t go quietly into the offseason. The Pacers smothered them all first half, with Beal (16 points, 7-19 shooting) and John Wall (12 points, 5-16 from the field, 9 assists) combining to go 5-16 in the opening two quarters. Whatever Randy Wittman said to his troops at halftime worked, though, and they came out flying to start the second half, and they hit the Pacers with an 11-2 run early in the third. Indy responded, but the Wizards came right back and ran off 8 straight to head into the fourth down 71-63.

Another 11-2 run to open the fourth, capped by Beal’s steal and triple, gave Washington their last lead of the season. From there, things crumbled. Four turnovers and six straight misses, combined with West’s shotmaking, did the Wizards in. The Pacers closed out the series with a 20-6 run.

“We worked so hard to come back, we spent so much energy trying to make that comeback, we just ended up being dead at the end,” Beal said in the post-game press conference, sitting next to his backcourt partner.

While the future is bright in the capital with Wall and Beal there for the long haul, Washington has some tough decisions to make this offseason. Trevor Ariza (6 points, 7 rebounds) and Marcin Gortat (19 points, 6 rebounds), two of the keys to the Wizards’ identity this season, both head to free agency. Regardless of the decisions the front office makes on those two, one of the best backcourts in the League will make sure they’re playing well into next spring.

For the Pacers, they get the rematch with Miami that everyone was expecting from opening night. The path they’ve taken has been rocky, but they do get Game 7 at home this year. That is, if they can get there.

“It’s only going to get tougher,” West said.

Game 1 of the Eastern Conference Finals is on tap for Sunday.—Brett Weisband

With Rihanna and Jack Nicholson courtside at Staples Center, the NBA MVP delivered a close out performance that would make any entertainer proud. In 44 minutes of action, Kevin Durant went off for 39 points, 16 rebounds, 5 assists and 2 blocked shots in an impressive 104-98 close out Thunder win.

“I was disappointed in how bad I was in game 5 in being forceful in cutting, so I just tried to be conscious of cutting hard and running everything pretty fast with pace,” Durant said. “My teammates did a great job of screening for me and Russ did a great job in setting me up.”

The Clippers hit the hardwood hype, finishing the quarter up 30-16. They continued their dominance in the second quarter, but KD started cooking soon enough and the game shifted. With about six minutes remaining in the second quarter, Durant hit three straight 3-point shots to cut the Clippers lead to 44-33. Durant had begun the game 1-for-6 prior to that stretch, and the buckets gave his confidence the surge he needed.

“It was big, they messed up on their coverage on the pick and roll and I was able to get free,” Durant said. “Russell made some great passes, I just stayed disciplined with my shot and it got me going. That was a big few minutes for me individually. It got us going, we were missing shots and you see the ball go in, you start to get confident. It’s not how you start, it’s how you finish and I just try to stick with it.”

The Clippers came out so fast and energetic in the first half, they had Coach Doc Rivers worried about being able to sustain the necessary energy levels during such an important game. “We’re a team in process,” Rivers said post-game. “I believed we were good enough to win it this year. Oklahoma City told us we were not, so we have to do more. I think this was a great learning tool for us. We have a great core and we’re going to have our day. This is not the end, this is the beginning for us.”

Despite Durant’s dominance, the Clippers came within striking distance late in the 4rth. Matt Barnes hit a layup with 50 seconds left in the game to cut the Thunder lead to 4, but OKC hit all of their free throws down the stretch and the Clips couldn’t gain enough ground before the buzzer sounded. Chris Paul led LA with 25 points and 11 assists, Blake Griffin added 25 points, 8 rebounds and 8 assists.

Russell Westbrook complemented KD’s fantastic performance with 19 points and 12 assists. “I thought Kevin was consistent the whole game, he rebounded well and did a great job of keeping us together,” Westbrook said.

OKC will face San Antonio in Game 1 of the Western Conference Finals on Monday night.—Nima Zarrabi