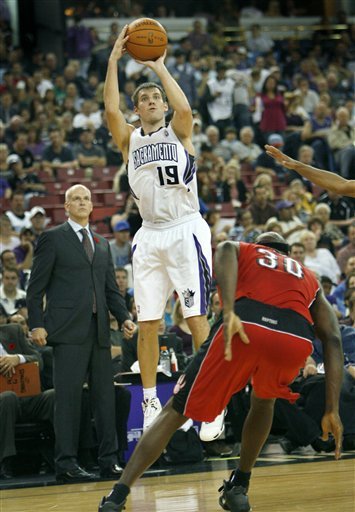 The Sacramento Kings are a team on the rise. In the midst of a 3-3 start to the season, the Kings continue to rebuild in hopes of becoming a force in the future and they are off to a fine start by identifying a core group of players to build around. Understandably, the focus of the team remains on players such as Tyreke Evans and DeMarcus Cousins, but Beno Udrih is a steady, dependable player who could partner with the team’s stars for years to come.

“I always have a goal for myself, but I’ve always been and always will be a team player than a player for myself,” said Udrih. “All I want to do is get better, help my teammates, get wide open shots, setting them up and getting them the ball where they’re comfortable, communicating with them and definitely my goal is to get better as a team. We can make those improvements and take those forward steps towards getting better.”

Udrih’s teammate DeMarcus Cousins was a great addition to the team via the draft this past summer, allowing the team to have a fine player on the wing in Evans and a low-post threat in Cousins. The Kings seem to be going about things the right way by adding talent with potential at key positions and, most importantly, youth in those positions. Due to that fact, the team sets itself up for a string of fine seasons ahead, continuously adding to the mix.

“He definitely shows that he has a lot of talent,” said Udrih. “He’s a big guy already and that can help with rebounds which we weren’t very good at last year. He’s got a lot of potential, but in the end, he’s only 20 years old. He has to learn the game because it’s a totally different game from the college game, even though he already has the strength to play in the league.”

Of course, with youthful players, the team must allow them time to adjust to the NBA and grow. Cousins is averaging 11.8 points and 5.8 rebounds through his first six games, which is are fine numbers for a rookie. However, he also averages 4.8 fouls per game. The rookie must find ways to adjust and remain on the court.

“The only problem with him right now is he’s getting a lot of unnecessary fouls, so he got in foul trouble and the coaches had to take him out,” said Udrih. “He’s a good presence on the court when he’s under the basket, not off the court. That’s the only thing that he has to get better at, but he did realize what he can do and what he can’t do so he doesn’t get those calls. I think he learned that, so he can clean up those mistakes, those stupid fouls.”

With the young players, as well as players such as Carl Landry and Samuel Dalembert, the Kings will take time to learn each other. However, starting off with a 0.500 record as they do their work is a great start, especially since two of the wins have come on the road. As they do each season, Udrih and the Kings have expectations for themselves. They might be different from those expectations that fans and media have, but all they can do is work towards their own goals, hoping that fans come along for the ride and media covers the team fairly.

“The expectations are definitely to do better than we did last year, to take a couple steps forward and to win some of the games that we lost last year,” said Udrih. “That’s basically, I think, about twenty games that were less than five points. We definitely have to get better at closing the games, especially when we have a lead. Just improve, get better and the team looks good. We still have a couple things we can get better at, but we’re working on it. It’s a long year and we have time, but we have to start picking it up and playing harder.”

Growth only comes from building up the talent on a roster and blatant honesty. There must be honesty with the fan base because they know when an organization is jerking them around and, more importantly, there must be honesty from the players and coaches in assessing what the team needs to work on in order to improve their product. The Sacramento Kings are honest with themselves regarding the steps in improving this year’s team compared to last season.

“Defense, for sure and less turnovers,” said Udrih. “When you make a turnover, then the other team is going the other direction and making easy baskets, so we definitely need to take care of the ball better. I think we need to work on our shooting a little bit. I mean, we have a lot of good shooters on the team, but last year with Tyreke (Evans), a lot of people didn’t know what he could do. This year, they all know what he can do and I think his assist ratio is going to go up because a lot of other people are going to be open with a shot, especially for a three-pointer. They’re going to be double-teaming him and loading on one side where he is, so we’ll need to work on that.”

Without question, there is still work to do, but the Sacramento Kings are on the right path.