We check in with Kyrie to discuss the latest Uncle Drew spot, his favorite Kyrie 1 colorways, his current health status and more. 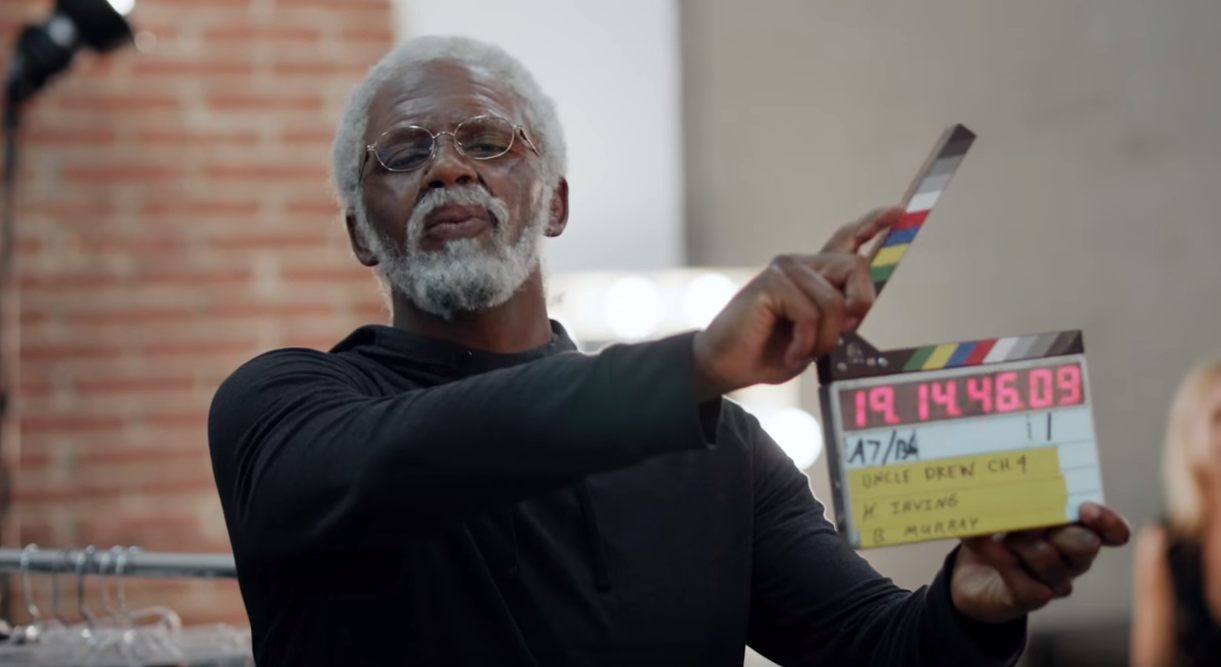 All-Star point guard Kyrie Irving fractured his left kneecap in Game 1 of the 2015 NBA Finals, and had to watch his Cavaliers go down in six games to the NBA Champion Golden State Warriors. Kyrie hasn’t played yet this season, but it feels like he’s ramping up the excitement to make his 2015-16 debut. Today, we finally got a glimpse of the shifty PG on a basketball court—except, not as Kyrie Irving.

The latest chapter of the always-hilarious and entertaining “Uncle Drew” series from Pepsi hit YouTube on Thursday, to the delight of fans everywhere, not just in Cleveland. With that in mind, we hopped on the phone with Irving to catch up about the latest in the hit series, plus ask him about the limited-edition (only 150 pairs) Uncle Drew colorway of the Nike Kyrie 1 that has sneakerheads drooling, and also get an update on his health status.

SLAM: Did you ever expect this much hype around Uncle Drew?

Kyrie Irving: No, not really, man. The first one, shooting the first one in 2012, and now being on Chapter 4, it’s something I couldn’t have dreamt of, man. I’m glad it’s gotten the reception and I’m just so thankful for Pepsi allowing the creative to be behind not only me, but our production team, and having athletes that we’ve chosen be such great people to put in our episodes.

SLAM: When you’re out and about, how often do people call you Uncle Drew instead of your real name?

KI: It’s more often than I would think. It comes from the kids all the way up to the adults. They know about Uncle Drew and sometimes people’s first view of me has been Uncle Drew and then they started following my NBA career. It’s great to know that that dynamic goes both ways of them watching me on the court and then also knowing me as Uncle Drew. [Laughs] Yeah, my first name is Kyrie and then I have this alter ego, Uncle Drew. People dressed up as him for Halloween and kids just knowing about the story of Uncle Drew and the storyline and wanting more, man, it’s truly an honor.

SLAM: What’s it like when you have all that makeup on and the fat suit and everything? What’s that feel like?

KI: It’s tough, man. It’s tough. But it’s fun at the same time. I did a time lapse on this last one, Chapter 4. It took exactly 3 hours and 47 minutes to do my makeup. And I sat in that chair for three hours, putting on that makeup. Then you go outside and you don’t wanna sweat too much. There’s a lot of things to consider. But overall it’s a true appreciation of the actors and actresses that are in the business. And when they do movies and they have to put on makeup every single day, they have to do it for months. And I’m here talking about 3 hours and 47 minutes over one day. But overall the project that comes out of it is worth it.

SLAM: What was the funniest moment from filming this chapter?

KI: The funniest moment for me was being around Ray Allen as Walt, Louis, who was Baron Davis, and JB Smoove as Angelo. It was amazing, man. Baron and JB Smoove, they have that background of being a part of productions and then Ray has been part of movies as well. To bring that all together and tie in with their own voices and characters and their alter egos, it was an amazing experience. It was great.

SLAM: Do other NBA players ever comment to you about your Uncle Drew videos or ask to be in the next chapter?

KI: A few of them have. More or less, it can’t happen because those other guys have other drink obligations. But with Pepsi, they allow me to go out and get everybody that we can, and that we think would be good to shoot an episode. It’s pretty open with who we choose and who we want.

SLAM: LeBron said today, “It’s all Coke here.” Do you guys have any kind of Coke vs. Pepsi rivalry?

KI: [Laughs] Nah, man. It’s an appreciation for what he’s doing for his brand and what I do for Pepsi. It’s no competition.

SLAM: So I was one of the lucky few to get these Uncle Drew Kyrie 1s…

KI: [Laughs] I can only imagine.

SLAM: How did that colorway come about? Did you have any say in the design?

KI: It definitely had to be designed for an older person, with the gum bottom, and also the lettering on the Nike sign that has a reflective hieroglyphic meaning under it, it says the “fundamentals” and everything that’s part of Uncle Drew. The all-white kind of mimics the socks and the grey that we had on the first one in Chapter 1. And the red and the blue goes with Pepsi and the collaboration that we all have together. To bring that shoe to life was an amazing deal and I’m glad that I have great partners such as Pepsi and Nike where we can come together on a project that goes way global and people have an appreciation for Uncle Drew and what he’s accomplished.

SLAM: Where does the Uncle Drew colorway rank in terms of your favorite colorways of the Kyrie 1?

KI: It’s probably top 3. I think the Veteran’s Day one that I just put on Instagram, Uncle Drew ones, and then the NBA Finals—the colorway that I wore in Game 1, I’ll always remember those—are probably my top 3 favorite Kyrie 1s.

SLAM: The Kyrie 1 was one of the most popular shoes around the NBA last year. What was that like for you to see?

KI: For me, I wanted to first of all earn the respect of everyone, of having my own signature shoe. That was the biggest thing for me. And then it extended to the stories that the different colorways told behind the shoe. To get the respect from my peers and to have them wearing the shoe, it was awesome. A lot of them have taken the creative to NIKEiD and I’ve seen their inspirations come to life. I’m not a selfish guy by any means, and I wanted them to have the same joy of creating a NIKEiD shoe that they can resonate with, and bring it to life. Whether that be the regular colorways of NIKEiD, it’s been a great collaboration and I’m glad that it’s gotten that kind of reception across the League.

SLAM: How often do you go look at the fans’ NIKEiD creations on your shoe on social media?

KI: I like every single picture [on Instagram]. I try to like every single picture, especially if it’s a colorway that’s just super, super, super hot. Like, dang, how did you come up with this colorway? They’re taking their creativity and bringing it to life, like I said about the guys across the League. The fans, they just have an appreciation of a great shoe, and a great story behind it. I want them to continue to follow it, and be a part of something bigger than all of us. I’ll remember the Kyrie 1, and the Kyrie 2 comes out soon. I’m excited for every shoe that comes out, but I want them to always have a story to tell about this shoe that they have. If it’s my shoe, I know that they have their own shoe and why they created it.

SLAM: What can we expect from the Kyrie 2?

KI: [Laughs] I think this is by far the most pictures that I’ve seen of any shoe that hasn’t yet been released by Nike. They have photos of colorways out now of my shoe that I didn’t even think that they would know about! It’s a gift and a curse. It’s an appreciation that people want to see my colorways, but also it kind of ruins the surprise of the shoe.

SLAM: What’s your health status right now? Do you have a timetable for your return?

KI: I have a date, but I’m not sharing it with anybody. I’m looking forward to being back with my teammates soon, and just doing everything possible to get back on the court. That’s the most important thing right now.

SLAM: What’s the single hardest thing about not being out there?

KI: The hardest thing is not being there for your teammates, and them playing. It’s tough watching from the sidelines. But you just learn a lot of patience, and your competitive drive never goes away. If anything it’s strengthened. The only thing is, you don’t want to rush back or do anything that’ll put you in a worse place. For me it’s just about being patient, doing everything I can to be back on the court.

SLAM: How much basketball are you watching around the League?

KI: I’m watching tons. Tons of YouTube clips, tons of live games on TV. Tons and tons of basketball, you’re just watching from a different perspective and you’re seeing players do their thing around the League. It gets your competitive juices going.

SLAM: Have you noticed anything different from LeBron this year, attitude-wise or basketball-wise?

SLAM: Have you listened to Iman Shumpert’s music?

KI: I’ve heard “Hotline Bling” and “Shumpman.” But I’ve heard numerous tracks before then, and have been a fan before I was his friend. I have an appreciation for guys that are comfortable with who they are and comfortable enough to know that they have a talent. He has so much story to tell in his words and what he does. Whether it be good reception or bad reception for what he does as an artist and as a rapper, it’s another release for him, and I appreciate that about him. It’s made us closer as teammates and as brothers. He goes out and while he’s hurt, he’s still making music—that’s a release for him. So I respect it, and I’m going to continue to support him.

SLAM: I noticed you posted about Justin Bieber’s new single on your Instagram. Are you a Bieber fan?