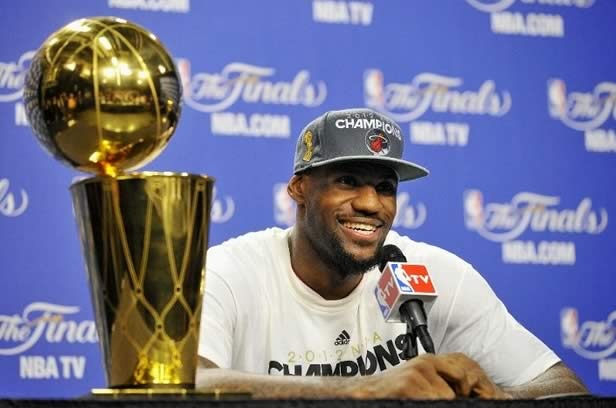 You can see him picking up steam, slowly reaching peak physical fitness as the season progresses towards the Playoffs. LeBron James isn’t just playing some of his best ball of late, but he’s also talking plenty of smack along the way.

In an NBATV intervew set to air on Monday, James opens up about his place in NBA lore.

The reigning MVP confidently states that he’ll be among the four greatest players of all time once his brilliant career comes to an end.

On who belongs on the NBA’s Mount Rushmore of the four greatest player: James named Michael Jordan, Larry Bird and Magic Johnson and said the fourth is “so tough” before naming Oscar Robertson.

Are you up there? “Yes, because I’ll be one of the top four guys that every played this game, for sure,” he said. “Someone’s got to get bumped.”

Go ahead and keep talking your sh*t, ‘Bron.

Now in his 11th season, the 29-year old LeBron James shows no sign at all of slowing down. Who’s to argue with his belief that he’ll rank among the game’s giants once it’s all said and done, assuming of course that he’s not already there?