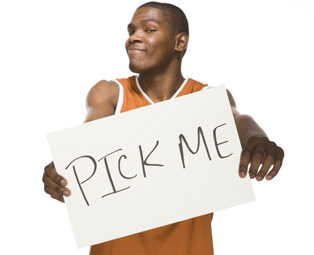 Those who are successful in life often preach a similar message: Learn from your errors. And after SLAM 109 dropped with both our cover subjects sitting at home, we didn’t want to go there again. We knew SLAM issue 110 would hit newsstands just as the NBA Finals were getting underway. And considering that we began working on this issue during the first round of the Playoffs, we didn’t want to guess (and miss) again.

This cover, actually, was sort of a no-brainer. We knew the biggest story of the summer, aside from the NBA Finals, was going to be the Draft. And we hadn’t been able to properly get at Kevin Durant or Greg Oden during the NCAA season. They’d both been in the magazine a few times, but neither guy had really had their full say. So, we figured, why not holler at both of them?

Our initial idea was to shoot them together, which hadn’t been done. We nearly pulled that off, until both of their schedules went completely haywire at the last minute. So we did the next best thing: We shot and interviewed each of them in their hometowns, Greg in Indianapolis and Kevin in Washington D.C. (Right about here I should probably issue a big thanks to both Greg and Kevin and their assorted people for all their help making this cover happen.)

Originally we were going to write two separate stories on the guys, giving each of them 8 pages to ramble on. But as our schedules and their schedules got all tangled up, I somehow ended up in charge of writing one big story, telling both of their tales and exploring their NBA futures. And yeah, there was a lot to get in there, not to mention (even though I’m mentioning it now) that the NBA Draft Lottery was going to happen one night after the entire magazine went to the printer.

One night I was sitting around trying to figure out how to write this beast, and I flipped past one of the early Democratic debates. Bingo. After all, the whole Draft process was going to be about figuring out who to pick first, regardless of which team ended up with the first pick. I’d also been thinking about how Kevin and Greg were going to forever be connected, almost like Magic and Bird. Even though they come from different parts of the country, play different positions on the court and own dissimilar body types, Greg Oden and Kevin Durant will forever be their generation’s Larry and Magic, the two best players of their era, tied together through hype and hope as much as anything else.

We ended up calling the story “Decision 2007,” and I asked both Oden and Durant the exact same questions. I looked at it like I was the NBA team with the first pick and this was their job interview, their chance to convince me they should be the first pick. Both guys gamely submitted, and they said some pretty interesting stuff. We talked about their college days, their work ethics, how they decided to go pro, their thoughts on the NBA. A quick excerpt…

SLAM: What was the whole college experience like for you?

KD: For me it was a big adjustment. Coming from a real small high school, there was a lot of people at Texas. But it was fun learning new things, seeing new people every day, so it was a great experience for me. I also went to all the home football games. I never went to a school with a football team before, so every chance I got to support the football team I went.

SLAM: Do you think you could have played in the NBA straight out of high school?

KD: I don’t even know, man. But I know right now I have a better chance of being an OK player in the NBA because I went to college. I’ve matured a lot. It was a blessing in disguise, really. A lot of people say, Man, they’re not letting those kids get that money. But it helped me out so much that I don’t even care.

GO: No, I don’t think I was ready for it straight out of high school. Just gaining experience and being able to learn so much, especially the attention to detail in the college game. Being able to have this year playing against different competition that’s not high school guys, that helped me a lot.

SLAM: Is it fair that you guys will always be compared to each other?

KD: If we played one-on-one he’d probably take me, because he’s too big and strong for me. With Magic and Bird it was different, because they actually played against each other in college. With me and Greg, people have just been saying since high school that we were one and two. People talked about one more than the other, whatever. But Greg and I play two different positions. It’s not even the same thing at all.

GO: When they compare us, hands down he’s going to win in a one-on-one game because that’s his game. I’m a big man—I go in the post and I dunk the ball and I rebound and block shots. His game is outside. When you compare us one-on-one he’s going to win, that’s unfair to me. You’ve got people who look at us as the best college players. I know he is, I don’t know if I’m up there yet.

SLAM: Why should you be the first pick in the Draft?

KD: I think I have a winning mentality. Even though I’m young, I can bring leadership to an organization. I’m just cold-blooded. I really don’t care. Whoever’s in front of me, I’m going to do my best to destroy them. Younger people might back down sometimes, but I think I’m a tough player and I don’t back down from anything—I accept challenges. I know it’s going to be hard, but everything you have to face is hard. I’ll be young, and I’m sure people will write me off and say I’m too small or not ready, but I’ve been going through that my whole life.

SLAM: Let’s say you just got drafted first overall. What will you tell that team’s fans?

GO: I’m going to come in, I’m going to be a good person to the city and the organization. I’m going to work my hardest to try to make that team the best that it can possibly be.

KD: Just like I told them at Texas: I’m going to be a hard worker, going to be an emotional player, a passionate player, and I’m just going to try my best to help the organization out. That’s all I can say.

There’s plenty more in the mag, but there’s a few highlights. Just like Fox News, I didn’t do any editorializing in the story: It’s just straight reporting, to give you guys the chance to decide who you’d select first overall.

That said, after being one of the few people in the world to spend significant one-on-one time with both dudes over the last few weeks, I think I know who I’d pick.

I loved Greg Oden. During the photo shoot he rolled in and was all laughs and smiles, joking around. He told our photo editor that he’d always planned on being a dentist…until his hands grew too big. He reminded me a lot of Shaq, with that same sense of humor and playfulness. But unlike Shaq, Greg has an overwhelming modesty, always underplaying his ability and skills. Check that quote above about how he doesn’t even know if he was one of the best college players last year. I don’t know how much of that is an act and how much of that is really real, but I got the sense that he’s really like that.

Kevin Durant was completely different. He came to our shoot with his Mom and he stayed pretty quiet throughout. I’m used to being around these young guys, but until his Mom mentioned it off-handedly, I forgot that Kevin is still just 18 years old. Still, he had an intensity and seriousness about him you don’t often see in 18 year olds.

All of that being said, if I had the first pick in the Draft, I’d take…

Kevin Durant. Look, both of these guys are going to be awesome NBA players — that’s basically a given. But if I had the first pick, I’d want the guy who’s going to be a legend, or at least give everything he has while trying to become a legend. I’m not saying Greg won’t be a legend, but I can’t get this one quote from Kevin out of my head: “I’m just cold-blooded. I really don’t care. Whoever’s in front of me, I’m going to do my best to destroy them.”

He didn’t sound arrogant when he said it, he just kind of threw it out there casually, but you could tell he meant it. And that’s the mindset I’d want to build my franchise around.

Anyway, SLAM 110 officially drops in about two weeks, but it’ll probably start showing up on newsstands later this week. There’s plenty of other great stuff in there, from the Warriors to Joakim Noah’s first rookie diary (which is great — Joakim’s the first rookie diary keeper to talk about Suge Knight) to T-Mac to Boozer to LeBron.

Now it’s your turn: Who would you pick first?