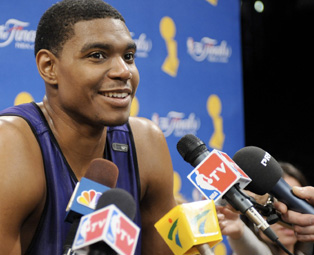 LOS ANGELES — Day two. First of all, let’s address yesterday’s post, where several of you commenters took me to task for being too blasé, for not being excited about this trip, etcetera and so on. My dad even emailed me and said, “You must hate your job!” My dad was joking, because he knows I love my job. And he also knows I work pretty hard at being the best writer I can be, and it ain’t easy. Sometimes you guys catch me when I’m fired up, sometimes you get to see the other side of things, when I’m dragging. But I’m not sorry for keeping real. That said…

Woke up this morning after last night’s Game 1 blowout and I still wasn’t any clearer about how the Magic managed to play such terrible basketball. Almost every game they’ve played in the Playoffs, they’ve at least played hard. But last night they just seemed listless, worn out, dunzo. Which isn’t a great look when you don’t come to play on the biggest game of the season. Who takes the fall there, Stan Van Grumpy? I thought it was kind of telling that in the post-game press conference after Game 1, SVG prefaced almost all of his answers with “I don’t know…” Well, isn’t he supposed to know? Or shouldn’t he at least pretend to know the answers? Isn’t that his job?

Also, SVG talked about how the decision to thrust Jameer Nelson into the rotation was completely and entirely the call of the coaching staff — Van Gundy said he and GM Otis Smith had discussions about Jameer’s health and whether or not they should even activate him, but once they cleared him to play, Smith left it up to Van Gundy to decide how much to play Nelson, if at all. And I wondered if it was really a great idea to leave a decision that big up to someone who was being criticized by his own players just a few weeks ago.

I chewed over this while walking to a Starbucks for my morning petrol, looking at the random names of stars on the Hollywood Walk of Fame along the way. Kinda weird that Arsenio Hall is like four stars down from Jay Leno. Actually, kinda weird that Arsenio Hall even has a star, I guess. I also saw a homeless guy sitting on a bench at a bus stop with several bags of stuff next to him. Normally I wouldn’t have thought twice about this, but yesterday afternoon, after I checked in the hotel, I ran out to get a bite to eat and the same guy was on the same bench. He must be waiting on a bus that doesn’t exist.

Mutoni and I met up with my main man Michael Lee, who has become an unstoppable blogger of late, and we drove down to the Stapler for practice. When we arrived, the Lakers were winding down their practice and getting set to face the media. I noticed a moth hovering around the court and was told by someone that the Staples Center has been battling a moth problem for a while now. I actually killed one in the press box during Game 1. I figured the moths must have something to do with the Clippers — perhaps they came from the closet where Mike Dunleavy locked away his fastbreak schemes.

During the Lakers’ media time, I caught up with Andrew Bynum. We did not go to Quizno’s, but we talked about Game 1. Drew said he tried to keep Dwight Howard uncomfortable in the post, but he also acknowledged that he was surprised the Magic didn’t try to get the ball to Dwight more often — Dwight had just 6 field goal attempts. “I think they’ll definitely try to pound the ball in to Dwight more in Game 2,” Bynum said. “I also think they’ll try to shoot over us when we run out on them at the three-point line.” (Trevor Ariza later noted that even if the Lakers try to shoot over the defenders running out on them, “we have to get them off that line, one way or another.”)

Bynum spoke on the differences guarding Dwight and guarding Yao, describing it as “athleticism versus skill,” though I think what he was really saying was that Dwight doesn’t have the post moves Yao has. And since Bynum has the size and speed to at least bother Dwight, if not totally stop him, this could be a long series for the second Superman.

Ariza was confident that the Lakers could continue to play as well in Game 2 as they did in Game 1: “As long as we keep our intensity and our focus, I think we’ll be able to play the same way.” I then asked Ariza what kind of things would cause them to lose their focus or intensity, and he said, “I couldn’t even tell you.”

The Magic then replaced the Lakers at the hastily assembled podiums surrounding the court. Jameer Nelson and Rafer Alston were nearly side by side, though Rafer had a microphone and Jameer didn’t, so Skip was basically talking over Jameer. Meanwhile, supplanted back-up point guard Anthony Johnson was sitting alone on the scorer’s table at halfcourt, methodically working his way through a bag of sunflower seeds, a habit he said was a remnant of his baseball career in high school.

When talk turned to the point guard situation, AJ summed up the situation thusly: “I’m the third horse in a two horse race.”

He didn’t seem upset about getting benched, even though he had a great series against Cleveland. I sat with AJ for the entire Magic media availability and watched him patiently explain over and over again to a rotating crop of reporters that yes, he’d like to be playing right now, but it was Stan Van Gundy’s decision and AJ was not going to “cause a ruckus” at this point in the season. He did a nice job deflecting pretty much every question, though it was kind of amusing to see AJ fish for an inoffensive answer when Marc Berman asked him, “Do you believe in the saying, If it ain’t broke don’t fix it?”

AJ also talked about Kobe destroying the Magic in Game 1, saying that he believes Kobe is the best player in the world because he has more of a midrange game than LeBron. With Bron, he said, you try to force him into taking midrange shots, but with Kobe there’s “not as many options because he can shoot the three, he can drive or make the midrange shots.”

So what do you try to make Kobe do, I asked.

(AJ also had a great line when someone asked him if the Magic need to jump on Kobe quicker when he came off screens: “Ya think?”)

After practice, Mutoni and I headed to Hollywood to grab lunch, then I went back to my hotel room and crashed for about an hour. I wrote a bit, then hopped in my rental car and drove out to Santa Monica to meet a friend for sushi. As I inched my way through Los Angeles traffic, I realized that the best way I could describe L.A. was as New York City remixed with the tropical vibe of Miami, and then smashed by God’s fist and flattened out so it’s about 40 miles wide instead of six miles wide like New York.

Three quick links to close out:

• Shaq’s Twitter feed has been well documented, but don’t miss this post he did last night during the game. I’m not going to ruin the surprise, but it’s funny. I’m going to make that my new photo on Twitter.

• Anyone see this story about Dan Gilbert promising the Cavs are going to win a title? He’s not trying to woo LeBron through the press is he? No, no, of course not. But do you know how serious Gilbert is about winning a title? So serious that he’s going to invent time travel!

“We will win a championship for Cleveland, Ohio,” Gilbert said Wednesday in a meeting with reporters. “It’s going to happen. We don’t believe in any of this curse nonsense. We’re going to work very hard, beginning a couple of days ago, to make sure that happens.”

They’re not only going to work very hard, they’re going to start doing it a few days ago! As soon as this meeting with reporters ended, Gilbert went back a few days earlier and made everyone start working very hard. At least we know LeBron has no problem hitting 88 mph in his car.

• Oh, and don’t miss our man Chad Ford admitting that he was “swept into” the Darko hype a few years ago. Yes, he went there.

That’s it. Catch you tomorrow…