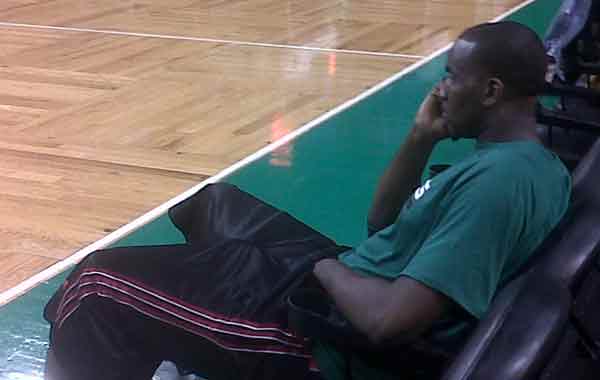 You could have predicted the results of the first two games in Los Angeles–the 1-1 split was a popular pick in the days leading up to the Finals–but you couldn’t have know how those games would play out.

You couldn’t have known that Kevin Garnett and Lamar Odom would be M.I.A for the entirety of the two games. Or that Los Angeles would shut down two (Ray Allen, KG) of the Big Three in Game 1, en route to an easy victory. You couldn’t have guessed that Boston would win Game 2 behind the hotter-than-the-sun shooting of Allen, in spite of Paul Pierce’s and, again, Garnett’s lack of production.

Woody Allen couldn’t have dreamed up the scripts for the games that were played on the Left Coast. And after last night’s game, it’s safe to say that no one saw Game 3 coming, either.

With a raucous crowd on hand at TD Garden, Kevin Garnett got off to a sizzling start, scoring the first six points of the game. After jumpers by Ron Artest and Rajon Rondo, L.A called timeout. The score was 8-2. The crowd was at a fever pitch. Even though the game was only a few minutes old, it felt like the Celtics were on the verge of running away with Game 3. Of course, it didn’t happen.

A few minutes later, with the score 12-5 Boston, the Lakers ripped off one of the most remarkable runs in Finals history, outscoring the Celtics 32-8 over a 10 minute stretch. When asked about the spree that turned a 7-point deficit into a 17-point lead, Kobe Bryant simply said, “I don’t know where that ranks in terms of history. But for us it felt good.”

Boston didn’t give up, though. Behind the strong play of Kevin Garnett, and with Kobe off his game (10-29 shooting), they were abe to play their way back into the game. At game’s end, however, with Paul Pierce struggling (5-12, 15 points), Ray Allen colder than he was hot in Game 2 (0-13 from the field) and Derek Fisher (!) on fire in the fourth (11 points in the quarter), the Celtics just couldn’t come complete the comeback.

So if anyway tells you that they  weren’t surprised by Ray’s 0-for and Derek’s fourth quarter production, just know they’re full of it.

–Paul Pierce: “This is the type of game we like to play. We look up…and we’ve got the game in the 80s. It’s our type of game. Usually we win these types of games, especially when you shut down the stars. But the other guys stepped up. You’ve got to take your hat off to Fisher–he’s been there and done things like that numerous times in championship runs.“

-Kevin Garnett on the just-short comeback: “It’s very frustrating. Very frustrating when you don’t play well offensively but defensively, you know, you sort of buckle down and get the stops and things that you want and get back into the game only to come up short. Yeah, that’s real disappointing.“

-Doc Rivers on the play of Derek Fisher: “[He] won the game for them. Derek Fisher was the difference in the game.”

–Rajon Rondo  on the play of Derek Fisher: “He played big. Can’t say enough. He pretty much won the game. Kobe and the other guys kept them in throughout the game, but when we made our run, he seemed to have answers every time.“

-Phil Jackson on the play of Derek Fisher: “Derek made a number of contested plays in the fourth quarter, contested shots and taking things to the basket, and he just got out there ahead of the field. We have this Direct Line principle: no one steps up, you keep going. And he saw the opening and went and made a very bold play. It was one-on-four. It was imperative that goes in for our win.“

–Kobe Bryant on his relationship with Derek Fisher as opposed to the rest of the team: “Yeah, he’s really the only one I listen to. Everybody else is a bunch of young kids. Derek, he and I came in the League together. We spent long nights together as rookies, battling each other, playing full court one-on-one games. You know, we’ve been through it. So he can come to me and say, Kobe, you’re effing up. We owe that to each other.” (For more of Kobe’s press conference, check the video Ben Collins and I recorded)

-Lamar Odom on Derek Fisher’s emotional appearance after the game: “That’s what it’s about when you are laying it on the line. Being emotional and here in Boston is big for us. That’s what playing basketball at this level is all about.“

-Derek Fisher on what his key contributions to the W meant to him: “It’s tough to put into words. I got a little bit emotional in my postgame interview right after the game just because I love what I do, and I love helping my team win. … So to come through tonight again for this team, 14 years in, after so many great moments, it’s always quite surreal and quite humbling to experience it again to do it again. But it’s like being a kid; you never get tired of that candy.

–Ben C. and I taped the entirety of DFisher’s interview. It’s worth checking out, so here it is for your convenience.

–As he was last night, Ben C. played Batman to my Batman (no Robin here) today. Ben already checked in today with some of the better quotes of the day, so read that before continuing on…

-…OK, you back with me? Some good stuff over there from Ron Artest and Glen Davis. Thanks, BC.

-Lakers practice opened to the media at 12 PM, a mere 12+ hours after Game 3 came to an end. Suffice to say, the atmosphere was light and the pace was sluggish. As has been the case for most of the postseason, Kobe was in sweats on the sideline. More disturbing to Los Angeles fans, Andrew Bynum was no where to be found. (Still, Bynum says he will play Thursday night.)

-Also of note from L.A.’s practice: Ron Artest was participating with a hoodie on underneath his practice jersey. Always Zen in words, Phil Jackson was zen in dress, too, sporting flip-flops and jeans. My friend texted me last night that Sasha Vujacic resembles Davey Jones of the Monkees. After promising him a closer look this AM, I concur: Sasha and Davey kind of do look alike. Take a peak for yourself:

-In a replay of media availability between Games 1 and 2, Ron Artest held court, making at least one reporter’s day as he dropped ridiculous line after ridiculous line. Here’s a small sample:

-“Both teams are complaining, so [the refs] must be calling it fair.” (This is nearly identical to what he said after Game 2 in L.A.)

-“I’m not perfect; I make mistakes.” (Thanks, Ron, but I think people figured that out after Malice in the Palace.)

-“Kobe and Fish have taken me on a ride. They’ve taken me to school, and they’ve given me a lesson every day.“

-I hope the following exchange was somewhat tongue-in-cheek on Kobe’s part. If it wasn’t, he really is becoming a basketball machine, devoid of all human emotion.

Reporter: “Kobe, Fish was very emotional after the game last night. Do you have any idea what’s going on with him and why he was so emotional?“

KOBE: “No I’m not an emotional person. I can’t understand.“

–One more Bryant quote, this time about Ray Allen’s poor performance in Game 2: “He just missed. If somebody goes 0-13, defense has got nothing to do with that. He just missed shots. He won’t miss them the next game.

–Whereas Ron Artest lives in his own world and Kobe wants us to believe he does, Derek Fisher is a pretty normal dude. And that’s evident in how he answers a question. His best answer of the day came when he was asked if yesterday’s big shot on Rondo meant more to him than the one against San Antonio in 2004: “You know, I always say about that shot in ’04, that because we did not win the championship that year–as exciting as it was and is to talk about–it doesn’t hold the special meaning to me that it could have. And so, making the shot at the end last night in the Finals means more than that shot.“

-All of the above Q&As took place behind podiums, with large groups of reporters around. I spoke with Jordan Farmar one-on-one, though.

ME: You happy with your play so far this series?

FARMAR: “Yeah, for the most part. Playing six, eight minutes, it’s tough to do a lot in that time. I know I’m going in there trying to be aggressive. Trying to get to the rim. Trying to make plays. At the same time, I’m trying not to force things. It’s really tough. I’m just trying to contribute while I’m out there.“

ME: Has coach Jackson commented to you at all on your play?

ME: How does this compare to your past Finals experiences?

-Once L.A. wrapped up practice and Ron Artest and Co. wound down their rap sessions with reporters, the Celtics trickled out onto the court. The first two C’s out were Ray Allen and Nate Robinson. As Ray headed towards a podium, the masses followed. That left Nate Robinson nearly alone. Ben actually recorded a video of our conversation, but it didn’t exactly work. So here’s what was discussed: hoops in Seattle vs. hoops in the DMV. I told Nate that Seattle was the second best place for hoops, offering D.C/Maryland/Virginia as the No. 1 region. We debated who would cover who (Brandon Roy would stick Carmelo Anthony), and he said we’ll pick it up again another time. One quote stuck out in my mind, though: “Durant’s good, but he’s not unstoppable.“

-Glen Davis was almost as interesting behind the mic as Ron Artest. He said five or six things that deserve to be written here. But instead of doing that, I’ll include the whole tape Ben and I filmed. It’s worth the watch.

-We’ll give Rasheed the same treatment we gave Baby, if only because he’s as disinterested in talking as Davis is interested.

-Doc Rivers came off as slightly upset with the refs in his press conference after Game 3. Today, he went a little further in his negative comments:

“I thought [Derek Fisher] got away with a lot last night,” said Doc. “I thought there was a lot of holding going on and a lot of flopping going on, and finally he showed that last one.

We got called for [an illegal screen] last night, and I don’t think the Lakers got called for any moving picks last night. I thought that–I don’t send in a lot [of tape to review] usually to the League; I sent in a lot this morning.

–I’m a much bigger fan of Kendrick Perkins than most. I think he’s one of the top defensive centers in the League. I appreciate his intensity. I don’t hate his scowling ways–I don’t think he can help. If you’d look pass the frown, you’d find a nice dude there. I guess that’s why I feel bad closing the post with this photo I took on my way out of the gym:

-Hopefully, you’ll check back in for more during my Live Blog tomorrow night.