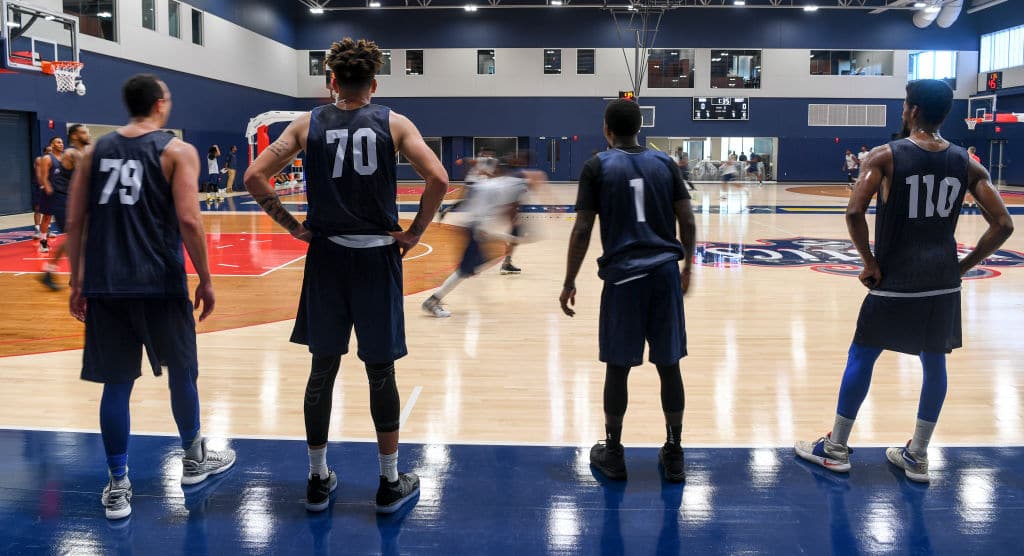 Prior to every season, G League clubs host open-to-the-public tryouts that allow the organization to scout talent that may have fallen through the cracks. This upcoming season, a record 28 NBA franchises will have affiliates, which means more players will suit up in the G League than ever before and with that, could come more opportunity in G League tryouts.

Jonathon Simmons is arguably the greatest success story to come out of G League tryouts. The former Spur paid the $150 entry fee to attend the Austin Spurs’ workout in 2013 and found his way onto the NBA roster just a few seasons later.

Not every session has a future NBA baller, but many past workouts have had future successful G Leaguers and every workout has a collection of passionate players looking to fulfill a dream of playing the NBA. The Capital City Go-Go’s recent open tryout was no exception. Roughly 100 G League hopefuls showed up to the Entertainment and Sports Arena this past weekend with an eye on making the Wizards’ affiliate’s roster.

The participants included a 34-year-old AAU coach, who appeared in 15 games for the G League’s Erie Bayhawks a decade ago; a former second-team All-Ivy League baller; the Peach Sun Belt Conference’s all-time leading scorer; a bevy of former NCAA athletes ranging from Division I to Division III; a pair of seven-footers and a handful of men who couldn’t pass for near 6-foot on Tinder.

One former NCAA athlete, who previously worked out for the Clippers’ G League affiliate, took a redeye from Los Angeles to D.C. with a two-hour layover in Denver only to arrive at his hotel three hours before the start of the competition. One prospect said he quit his day-time job months ago to focus on training for the event. One fellow media member said he recognized a few guys from L.A. Fitness. A pair of local college students who didn’t make the team declined to split an uber with me across D.C. afterward because their mother was on her way to pick them up. It seemed like nearly every prospect had a unique path that brought them to Southeast D.C.

When participants first arrived, they were put into teams of five and remained with those squads for three scrimmages over the roughly four-hour session. The Go-Go staff gave each team a few “basic” plays to see which players could “take instruction and implement it on the court,” General Manager Pop Mensah-Bonsu told a small group of media members, including SLAM Newswire.

“We did that just to have some structure on the court,” Mensah-Bonsu said. “It’s not just like they’re out there playing pickup. We gave them a few plays to see how that worked and it looked pretty good.”

Scouts and coaches look for players willing to play a role. Scoring on every play during the tryouts won’t necessarily put a player in a good light; G League teams are not going to run their offense through someone walking in off the street. Excelling at a skill while playing off the ball is more likely to get a prospect further than simply getting buckets.

The first cut at the Go-Go tryout came after the morning session, which was open to the public for anyone who paid $200 to attend. While there was a talent disparity among the approximately 100 participants at the Entertainment and Sports Arena, Capital City was pleased with the turnout and level of play.

“We only anticipated picking five or six but we felt compelled to add a few more guys to give them a second look, so this one was pretty good in that regard,” Mensah-Bonsu said.

Make it past the first cut and get ready for an afternoon with prospects that were invited to the training facility. Over a dozen players did just that, competing with invited prospects (and their fresh legs) during the afternoon. First-year head coach Ryan Richman said the team may look to add three or four players from the second session to the Go-Go’s roster, though there was no timeline for making that call. The Wizards have an open two-way roster spot and while it’s unlikely, the spot could go to a player who participated in the tryouts.

Mensah-Bonsu, who played for five different NBA franchises from 2006-2011, empathizes with those who did not make it past the first session. The George Washington product has been cut from NBA clubs as well as organizations abroad, telling SLAM Newswire and other media members in attendance that on one occasion, his pink slip came five minutes before his contract was guaranteed.

His memories of being released stick with him as he shapes his approach for leading the Go-Go organization. “There is a way you can do business with honesty and integrity,” said Mensah-Bonsu, who had to deliver the message of being cut to over 80 participants this past weekend.

For many players, a G League tryout may be the last opportunity to showcase skills and work toward playing in the NBA and it may force some to shift their goals to a different career. For those who remain intent on playing in the league, next offseason will provide another opportunity to chase a dream.