On The Come Up 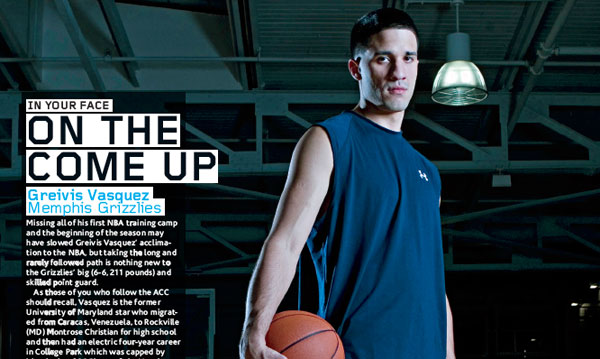 Grizzlies rookie Greivis Vasquez made many big plays in last night’s thrilling Game 4, but none were bigger than when he hit a huge shot that sent the game into double OT. As Ben Osborne pointed out in SLAM 147, whether it’s the ACC or NBA, Vasquez’s cojones will always be there.–Ed.

Missing all of his first NBA training camp and the beginning of the season may have slowed Greivis Vasquez’ acclimation to the NBA, but taking the long and rarely followed path is nothing new to the Grizzlies’ big (6-6, 211 pounds) and skilled point guard.

As those of you who follow the ACC should recall, Vasquez is the former University of Maryland star who migrated from Caracas, Venezuela, to Rockville (MD) Montrose Christian for high school and then had an electric four-year career in College Park which was capped by his winning ACC Player of the Year last season. This lengthy journey had Vasquez entering the Draft at the relatively old age of 23. “Everything started for me with the blessing of going to Montrose,” says Vasquez. “That was six years ago. It was a great situation for me because I ended up playing with Kevin Durant my senior year. We played together and I had a lot of looks from colleges and I chose to go to Maryland. It was a great starting point for me because I got better as a player and developed the type of person that I am.”

Vasquez was not seen as a sure-fire NBA player early in his college career, but he kept getting better and his overall package ultimately proved impossible for the improving Grizzlies to resist. Now a small but very steady part of Memphis’ rotation, Vasquez is averaging 3.4 points and 2.3 assists per in 50 games played.

Of course, Vasquez’ age and unique path to the League are all linked to his homeland of Venezuela, where Greivis resisted the siren song of beisbol, by far his country’s most popular sport, to focus on hoops. He is now the only Venezuelan player in the NBA and just the third all time (Carl Herrera and Oscar Torres). If Greivis has anything to say about it, however, there will be a lot more in the future.

“I’ve been talking to my people at Under Armour about all this,” he begins. “It’s not going to be overnight but if we can do things like invitational high school events that get the kids involved, it’s going to make a big impact. Yes, our main sport is baseball, but basketball is second and we’re only coming up.”