Milwaukee Bucks point guard Greivis Vasquez has an infectious personality that fills up any room he enters. So when the 6-6 veteran saunters onto the permanent halfcourt hardwood at the Under Armour campus in Baltimore, there’s nothing incognito about it. Daps and hugs are exchanged with everyone in shouting distance, from long-time friends to complete strangers. That’s just Greivis being Greivis.

But there is one thing that’s different. See, Greivis is on a diet.

“Sweets, I had to stop eating sweets. That sugar is not good for your body. I was eating a lot of sugar, now I’m done with that,” he says, nodding at a large plate of catered pastries set up around the corner from UA’s photo set on a September afternoon. “I feel the last two years, I’ve been doing the little things that are going to keep me in this League for a little bit longer,” adds the 28-year-old. “I want to play at least six more years.”

So instead, Vasquez is eating more organic, paying strict attention to nutrition and scheduling his meals with discipline—usually eating right after workouts, which have lately become a 3x per day occurrence. He has a personal trainer who’s with him 24/7, typically working on a dynamic workout to improve his conditioning, explosion and quickness in the morning, followed by a noonish core workout and a nighttime weightlifting session. Sticking to that regimen for the summer months, he says, has him in the best shape of his life.

“This year is so important for me. My goal is to establish myself on one team that can really give me an opportunity to display my game,” Vasquez says. “The good thing about it is, I’ve been traded [four times], but I’ve still played heavy minutes—everywhere I go, I have an impact, I have an important role. I know my role, and I’m realistic with what I can do.”

Drafted by the Grizzlies in 2010, Vasquez was traded to New Orleans after his rookie season, then to Sacramento two years later and soon thereafter to Toronto, where he spent the better part of the last two seasons. Now Vasquez, who will be a free agent next summer, is set to begin his sixth NBA season, with his fifth team.

Last season in Toronto, GV played in all 82 games and posted averages of 9.5 points and 3.7 assists per, mostly coming off the bench for a Raptors team that was bounced in the first round of the Playoffs. But with running mates including Greg Monroe, Giannis Antetokounmpo, Khris Middleton and Jabari Parker, OJ Mayo and a young point guard to mentor in former ROY Michael Carter-Williams, Vasquez is looking to get back to his NOLA days, like in 2012-13, when he posted career-highs of 13.9 ppg and 9 apg as a starter.

“I feel like this year, I don’t have to do anything different,” says Vasquez, who over his career has alternated between rock-steady starter and top-notch backup. “I’ve just got to be solid, do what I do, and hopefully Milwaukee will be the team that offers me something so that I can stay for more than two years at least. Finally I want to break that habit that I stay on a team for only two years.”

Vasquez learned of his latest relocation while he was back home in Venezuela working out and watching the Draft. He remembers getting the call from Raptors GM Masai Ujiri. 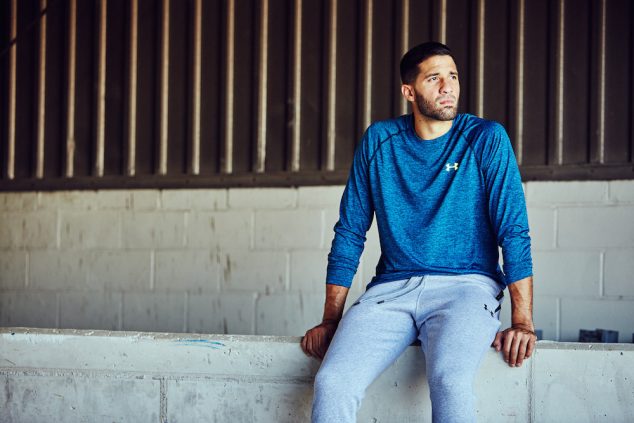 “He was like, I don’t want to have to do this, but we’re making this trade,” describes Vasquez. “You know how this business works. I wasn’t surprised—I wasn’t surprised because the trade was to Milwaukee.”

Toronto flipped Vasquez for the rights to 46th pick Norman Powell plus a protected first-round selection in 2017. After grappling with the initial but not unfamiliar discomfort of being traded yet again, Vasquez connected with his new head coach, Jason Kidd.

“Having JKidd as a coach, to me, is a dream come true. It’s unbelievable because I grew up watching him play, I modeled my game after his game. I’m a tall point guard that can pass, and my shooting ability’s gotten better,” says Vasquez, who shot 38 percent from the three-point line each of the last two seasons—a slight uptick from his career mark. “He [Coach Kidd] is really going to make me the point guard that I want to be in this League. I’ve gotten the minutes, but this time I think it’s going to be not only the minutes, but that green light to just be free and play. I’m excited about this situation.”

Given that the Bucks (5-8) paid the hefty price of a first-round pick to get him, Greivis feels confident that he’ll get a legitimate shot to prove himself worthy of keeping around.

“That shows how committed they are. At least, whether they are committed or not, they’re telling me, Look, we want to see what you can do for us, and after that you’re going to be rewarded. That’s basically the message that I got,” he says. “I don’t want nothing easy, I don’t want them to give me anything. I want to earn every dollar that I make. But at least they’re showing me signs that they’re highly interested in keeping me for a long time. I value that.”

Still, Vasquez was heartbroken to leave the 6ix, and the Raps’ devoted fanbase, behind.

“Toronto was an unbelievable experience for me, I really loved the city. That city’s always going to be in my heart. The fans, I still believe those fans are some of the best in the whole world. But I’m looking forward to this new opportunity. I like Milwaukee as a city.”

Once they get to know him, Milwaukee fans should warm up to the passionate, playmaking point guard right away. He is, so far, coy about the possibility of facing his former team in the Eastern Conference Playoffs come springtime, but Greivis is hype to have gotten rolling in Trillwaukee, where he’s averaging 6.9 points and 4.7 assists in 24 minutes off the bench through the first 13 games of the season.

“Everybody that knows me, knows how loyal I am,” says Vasquez. “I just like to work. I feel like this team is a unique team where I can showcase my leadership skills, I can talk and display my voice. It’s a young team that can do some special things this year and throughout the next cycle, the next three years. If we keep everybody together, I think eventually it’s going to pay off where we can go to a Conference Finals or an NBA Finals.”

Over a 20-minute chat, the fiery Vasquez uses that word—loyalty—over and over. Considering his successful yet nomadic NBA career thus far, he feels a particular allegiance to the team in Baltimore that’s shown him unconditional love the longest.

“It all comes down to loyalty,” Vasquez says, again, this time pride swelling in his voice as he talks about Kevin Plank and other key figures he’s worked with at Under Armour—people he’s built strong relationships with since the prime of his college career at the University of Maryland nearly a decade ago. “This is family to me. I put my chest first for the company, for the people that work here, for the people that have done so much for me throughout my career.”

Never one to sugarcoat anything or censor himself, even in an industry in which every athlete is coached to stick to the script, Vasquez speaks honestly about the growth he’s seen in Under Armour’s performance gear since 2008, when the brand took over outfitting UMD’s athletic programs.

“I’ll tell you the truth: the jump has been tremendous. Since I wore the shoes for the first time in college to now, we’re at that level now,” says GV. “You can see it when you walk around in the world.”

Vasquez would know. Born in Caracas, Venezuela, he left home in the fall of 2004 (with some help from Ujiri) to play ball at Montrose Christian School near Washington, DC. In the years since, he’s played for NBA teams in the South, on the West Coast, even in Canada. And he’s back in Venezuela for as much of every offseason as he can manage. Bottom line, the Bucks PG is, uniquely, able to speak with a global perspective.

“I’m basically from DC, I’ve been here almost my whole life, and it’s crazy how Under Armour as a company has taken over the DMV. Everybody’s wearing Under Armour,” says Vasquez. “Then I go to Venezuela,” he continues, “and people ask me, How do I get access to Under Armour? They want more shoes, they want more clothes.”

In fact, Vasquez has eyes on helping the company grow internationally. He says he’s researched markets in South America, and has had conversations with the global marketing team at UA about opportunities to launch his signature GV products in Venezuela and its neighboring countries. His hands-on involvement, he says, comes from both a feeling of personal responsibility for UA’s success in the hoops realm and a genuine respect for the brand’s mission statement.

“My game don’t change,” Greivis says. “I’m not the most athletic guy, but I find my way. And that’s why I identify myself with Under Armour. We know our goals, and what we’re working for. That’s just who I am, too.”