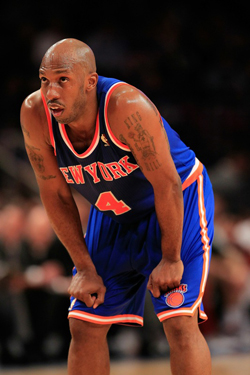 Picture this: You just got off the phone with your agent. You found out you need to pack your belongings, say goodbye to your family and friends, meet your new co-workers, get acquainted with your new city, and start working.

The catch: complete the listed tasks all in the next 24 hours.

With the NBA trade deadline furiously coming and going this past Thursday, the previous scenario became a reality for players all around the League. Teams shipped guys from Boston to Oklahoma City, Boston to Sacramento, Sacramento to New Orleans, Charlotte to Portland, Boston to Cleveland, Cleveland to Los Angeles, Washington to Atlanta, Denver to New York…you get the point.

Headlined by Carmelo Anthony leaving Denver in the dust for his dream situation in the Big Apple, the 2011 NBA trade deadline became a day of intense dealing down to the wire. Teams executed over 14 trades in 24 hours with players going across the country on an hourly basis. Although ‘Melo fits in with the Knicks on the court—the situation he so desperately wanted to be in—not every player embraces his new home like ‘Melo does. Deron Williams told the papers the trade blindsided him. Kendrick Perkins cried after he heard about his relocation. Baron Davis became the newest member of the worst team in the NBA with a coach he openly feuded with in the past. Danilo Gallinari, Wilson Chandler, and Ray Felton were just beginning to display a high level of camaraderie together in New York. And finally, Chauncey Billups accompanied Carmelo Anthony to the Knicks to make the trade worthwhile for both sides.

Billups stormed out of practice in angst about his recent move out of Denver, yet didn’t make a fuss about the basketball aspect of the trade. Unlike Carmelo Anthony, Billups cherished his situation in Denver and shot a career high 44 percent from deep. He was executing his childhood dream team in the exact situation he wanted to be for the 14th year of his NBA journey.

“That right there was the hardest thing I’ve ever had to do in my life,” Billups told the Denver Post. “That’s tough, man. That right there was the toughest thing for me—the family aspect of it. Basketball is basketball, I’ve been doing that all my life, that won’t change, wherever I’m at. But it’s the family aspect that people don’t understand. I got to go home and face my three daughters, I have to face my wife, and tell them that daddy’s leaving. And daddy doesn’t have a choice, daddy doesn’t have an option. And that I have to go in 24 hours.”

Billups brings to light how most players consider the uncertainty tomorrow brings as the most aggravating and disrespectful part of an NBA trade. Aside from the on-court philosophies, players have to adapt to all the behind the scenes changes in the blink of the eye.

Vince Carter deals with trade talk reality at every stop of his NBA career. Critics and fans constantly scrutinize Carter as an expendable asset, yet he continues to produce in spite of the hectic changes that occur during trades.

“I think the toughest thing about it is having to move your family—if you have family members living with you—finding a place, getting settled, learning the plays, learning new teammates and them learning you,” Carter recently stated. “It’s tough, but once you’ve been through it once or twice, you know what to expect and know what to ask.”

Six-year NBA veteran Channing Frye went through the trade process and echoes Carter’s sentiments. He sees the fresh faces come and go through the locker room, sees newly traded players enter into his locker room with a state of nervousness, and understands the harsh reality of switching lifestyles. “Imagine picking up your family and moving somewhere you’ve never been before. You have to assimilate yourself to the environment—the place, the people—but that’s part of the job.”

Aaron Brooks just became the most recent player added to Frye’s locker room. The Houston Rockets traded Brooks during his third season with their ballclub. The Rockets blindsided Brooks with the news of his departure, leaving Brooks with completely mixed emotions.

Sadly, however, Brooks’ situation is the rule and not the exception.

“It’s just an awkward feeling,” stated Brooks. “I’ve been in one city for four years. It’s just awkward being around new guys. Everyone here (in Phoenix) is nice and luckily I’m in a good situation.”

“I had to fly to Phoenix, do my physicals, didn’t practice, then come out here and pretend I know the plays,” Brooks continued, laughing.

Unlike Brooks, seven-year veteran Devin Harris knew that he would wear a different jersey at some point this year. Harris heard, like everyone else, the trade rumors circling the Nets camp ever since the grand entrance of Russian billionaire Mikhail Prokhorov. Although Harris figured he would be dealt at some point, thinking about his future suitors meant less concentration on the task at hand—turning around a bottom feeding Nets team. Devin also realizes that until he actually knows where he will end up finishing the year, wasting time on the off-court issues only hinders his current on-court performance. “I mean obviously moving cities—I was prepared for the move—but just joining the team out there on the road, trying to get a practice in last night [before Utah played at Indiana], and trying to fit as much stuff in as little time as we had,” explained Harris about some of the behind the scenes actions that take place.

In every one of the aforementioned scenarios, the player found a new team and tried to settle in by getting used to their new environment/team. But what happens when a team tries to execute a trade, both parties agree on the trade in principle, but the teams send in the trade after the deadline passed? Ask Pacers forward Josh McRoberts.

McRoberts played part in one of the most unusual scenarios in all of trading: both teams agree on the trade, but cannot legally complete the trade. Multiple reports confirmed the news that Josh McRoberts had been traded to the Memphis Grizzlies in a three-team deal involving O.J Mayo, Brandon Rush, and first round picks from either the Pacers, Grizzlies, Hornets, or a combination of the three.

“To me, I was alright,” McRoberts said. “I understand it’s part of the business, but my grandma was ready to kill somebody.”

After such a bizarre development takes place, how does McRoberts see his coach, owner, or general manager in the same light ever again? Can someone say, “awkward?”

“It’s tough, you know,” he continued. “You try to make it just a business, but you’ve got to come back and work for the people who just tried to get rid of you.”

Basketball creates a friendly and safe environment for fans to enjoy a competitive atmosphere. Every kid that picks up a basketball dreams at some point in his/her life to play professional basketball. The attention, fame, glory, wealth, and even sometimes power seem unbelievably attractive to the normal person. Don’t be fooled, however, because basketball is a business just like any other business. The “surreal” or “glorified” perception of NBA players defects the fact that the basketball business toys with players, fans, and management’s emotions. Everyone involved in the game becomes emotionally attached somewhere. Just like any other successful business, however, production trumps all. At the end of the day, a general manager tries to put out the most productive product possible, represented by possibly the most hectic trade deadline in NBA history.

“It was one of the most active ones that I’ve seen in a while,” said Utah Jazz head coach Tyrone Corbin about the trade deadline. “So you know, you just have to…” and he paused to think. Like any normal human being, coach Corbin needed to gather his thoughts about how to cope with such a drastic change in such a short amount of time. The emotional toll sets in after some point, and quite frankly, like it rightly should. He gathered his thoughts and continued, “…deal with it man. Some years it’s more active than others. This is the most active I’ve seen in a while, but what can you do about it? You have to move on.”