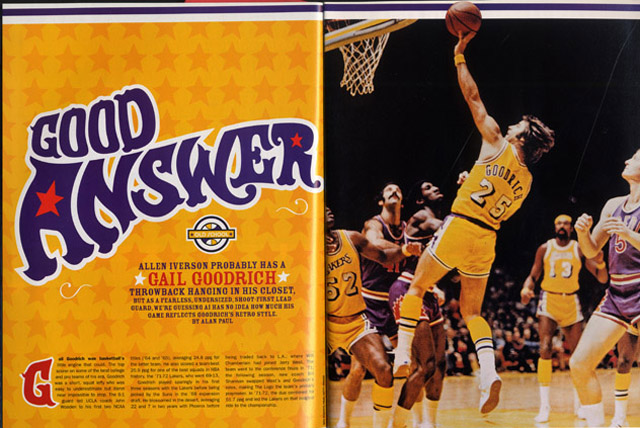 It was brought to our attention that we inexplicably left former Lakers (and Suns and Jazz) guard Gail Goodrich off of our Top 500 list. Shame on us. We apologize for the error. When we update and re-release the special issue, no doubt Goodrich will be where he rightfully belongs. For now, running this old school feature from SLAM 99 will have to suffice.—Ed.

Gail Goodrich was basketball’s little engine that could. The top scorer on some of the best college and pro teams of his era, Goodrich was a short, squat lefty who was easy to underestimate but damn near impossible to stop. The 6-1 guard led UCLA coach John Wooden to his first two NCAA titles (’64 and ’65), averaging 24.8 ppg for the latter team. He also scored a team-best 25.9 ppg for one of the best squads in NBA history, the ’71-72 Lakers, who went 69-13.

Goodrich played sparingly in his first three seasons with the Lakers before being picked by the Suns in the ’68 expansion draft. He blossomed in the desert, averaging 22 and 7 in two years with Phoenix before being traded back to L.A., where Wilt Chamberlain had joined Jerry West. The team went to the conference finals in ’71; the following season, new coach Bill Sharman swapped West’s and Goodrich’s roles, making The Logo the team’s primary playmaker. In ’71-72, the duo combined for 51.7 ppg and led the Lakers on that magical ride to the championship.

A five-time All-Star, Goodrich ended his 14-year career with the Jazz in ’79, finishing with 19,181 points. He was elected to the Hall of Fame in 1996. After years developing golf courses, Goodrich now lives in Connecticut and is a part-time analyst for NBA TV.

SLAM: You were supposed to be too small to play in college and too frail to hang in the NBA. What did people overlook?

GG: I had some skills and I lived, ate and breathed basketball. All my life people said I was too small and too slow, but I had an incredible desire to succeed and win. I was very competitive and intense, I had strong fundamentals and I knew how the game was played. Also, I didn’t back down. When asked about me in a name association, John Wooden once said, “He had the nerves of a burglar.”

SLAM: How did you improve by playing at UCLA? And how unbeatable did you guys feel in ’64 when you went 30-0?

GG: I really learned the game at UCLA. I learned how play without the basketball and how to play the 94-foot game. Wooden saw me play as a junior in high school when I was 5-8, 120, and he saw something and was one of only two schools to offer me a scholarship. Going there was an easy decision that turned out to be one of my best. The 30-0 year was very special, but it’s not like we had a goal of going undefeated. We weren’t even in the Sports Illustrated preseason Top 20, and we were underdogs in the Final Four because our biggest guy was 6-5. But we were very quick and relentless, with constant running and a fullcourt zone press that really flustered teams.

SLAM: You scored almost 25 points per game as a senior—not what people expected from John Wooden’s point guard.

GG: As long as you took good shots and played within the offense, Coach Wooden was fine with it. The year before, we had Walt Hazzard at the point. He was a great distributor, and Coach convinced me that if I worked without the ball, Walt would get it to me and scoring would be easy, which is what happened. The next year Walt was gone and I became the primary ball handler, but I could still score. In fact, some of my teammates would say I never saw a shot I didn’t like.

SLAM: Did it bug you to be called a gunner?

GG: Not really. I always felt good if I was taking high-percentage shots. As long as you are doing that and within the scope of the offense, I think you’re OK. I will admit that I shot a lot, but I think I was a pretty good player who could create my shot. I was more of a scorer than a shooter. I knew how to get to the hoop and finish and get to the foul line.

SLAM: How did you manage over five boards per game as a junior and senior?

GG: I was a player with a nose for the ball and an understanding of angles, which allows you to anticipate where the ball is going. I was also pretty aggressive and did not fear going in there with the bigs. Look at Shawn Marion—he gets so many rebounds because he finds the ball. I think I was one of those players, and that went beyond rebounds. It’s also why I could take so many shots—I knew how to make myself attractive to receive the ball in places where I could do something with it. I learned a lot of that from John Wooden.

SLAM: Connie Hawkins arrived your second year in Phoenix. How was he to play with?

GG: Connie was just a tremendous basketball player, right up there with Jerry West, Elgin Baylor and Wilt as the most skilled players I played with. He was 6-8 with tremendous hands, and he could do things that I had not seen before. My first year there we were an expansion team and pretty bad. But the next year, Connie and Paul Silas arrived and brought us a real presence, and once we got used to each other, we became a very good basketball team. We made the playoffs and had L.A. down 3-1 before Wilt decided to take over. At the end of the year, I had a contract dispute with Jerry Colangelo—who is today a very good friend—and he traded me back to the Lakers. Obviously, that worked out really well for me, but I was very sad to leave because I thought we were on the verge of something great there.

SLAM: By then, the Lakers were a different team than the one you’d left, largely because of the arrival of Wilt. How big of a presence was he?

GG: Huge. He was a leader. I liked Wilt, and we got along very well. I think in many ways he was misunderstood by the media, who didn’t do justice to some of the things that he accomplished and instead focused on his rivalry with Bill Russell. Wilt never really hung out with his teammates. At the end of the day, he went his own way, as did Jerry West, though he and I were good friends. But we were a very close team on the court. It took us a year to get used to each other and overcome some injuries. Then Bill Sharman became the coach and changed the offense, putting the ball in Jerry’s hands, where it belonged, because he was the best. Then we just came together in a remarkable way in ’72.

SLAM: The team went 69-13 and won 33 straight games. Every game must have felt like the greatest game you’d ever played.

GG: We played with a tremendous confidence that borders on cockiness. We walked on the court feeling like no one could beat us, and that grew from game to game. That was very characteristic of our teams at UCLA also, and you see it today in the Spurs and Pistons. Teams like that do not panic in the fourth quarter. You know you will be tested and figure out how to win. And it’s also characteristic of how I played the game. Elgin once said to me, “Gail, you would drive against King Kong.”

SLAM: Happy Hairston is the forgotten man of that Lakers team, but he put up some great numbers. What was his role?

GG: He was essential. He was an outstanding rebounder whose role was to crash the boards. He led all forwards in rebounding, no small feat playing next to Wilt. He also could get out on the break and fill the lanes. He didn’t take shots he couldn’t make, and he averaged a solid double-double. He was a fantastic role player. You can’t have five guys shooting the basketball.

SLAM: You finished your career in New Orleans, where you and Pete Maravich were supposed to be a dynamic backcourt. But it never quite clicked, in part because you got hurt. Was that frustrating?

GG: Very much so. Pete had tremendous skills. He could do anything with the basketball, but we really did not complement one another. I don’t think we played very well together, and I take partial responsibility for that. That team played a little bit more individualist than we should have. Pete was difficult to play with…he had some very strange understandings of how the game should be played. I don’t think you can win with a guard taking 35 to 40 percent of the shots. You have to have better balance, better trust in other players. When you don’t have other greats, you have to run things that make sure you get everyone involved. I don’t know if it’s Pete’s fault that didn’t happen, because it is also the coaches’ responsibility.

SLAM: You said earlier that Jerry West was the best. Please elaborate.

GG: He had great skills in every area and was a tremendous competitor with a fierce drive to win. He was the absolute best with the game on the line. He demanded the ball in those situations and succeeded time after time. He was a very smart player who understood how to make things easy. He was also a fantastic defensive player. We were great friends, and he really taught me how to play the game on a pro level. We spent hours talking about the game, how to defend certain guys. I owe a lot of my pro success to him.