Original Old School: The Defiant One 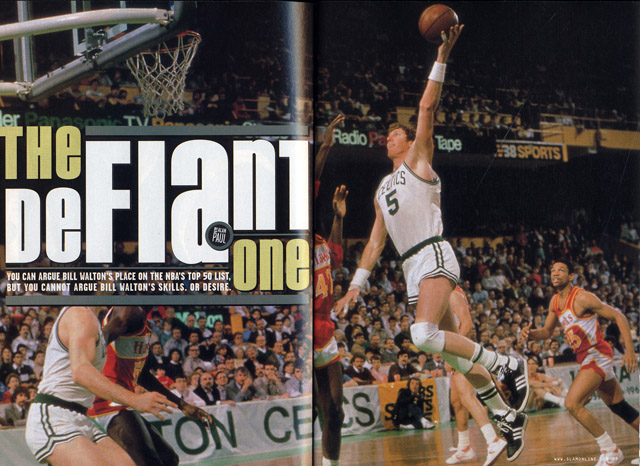 “Throw it down big man!” It’s a phrase we haven’t heard in a long time, ever since chronic back problems, once again, removed Bill Walton from basketball. But just like his playing days, Walton keeps bouncing back. His health has returned, and so will his voice this upcoming season when he calls some Sacramento Kings games. We can’t wait. For now, though, this Old School from SLAM 32 will have to hold us over.–Ed.

You have to start with the feet. You can’t really begin to understand Bill Walton until you realize just how screwed up his dogs were. Bad enough that the three-time college player of the year’s pro career was limited to 468 games over 13 seasons, four of which he missed entirely.

The next thing you must understand is just how strong Walton’s desire to keep playing really was. Strong enough that he had his feet sliced open and worked on 30 times, never giving up on the hope that he would someday return to the court. Strong enough that in ’86, five years after both he and his doctors announced he would never play again, he managed to win the NBA Sixth Man Award and help the Boston Celtics to their 16th championship.

When the 6-11 Walton’s feet began to fail him almost as soon as he appeared on the basketball landscape, it devastated his game and robbed both him and NBA fans of countless hours of satisfaction. For Walton played the game with a full-court zeal rare in big men, making steals, blocking shots, filling the lane, tipping in errant attempts.

“When he was healthy, which wasn’t for very much of his career, I don’t think there was ever anyone better,” says Dr. Jack Ramsay, who coached Walton and the Trail Blazers to the ’77 title. “He had probably the best across-the-board skills of any center ever; he was an excellent defender, he blocked shots and he had a great sense for directing the defense. On offense, he rebounded and got the ball out on the break-turning and passing while in the air-better than anyone. He could run the floor, he had great hands, he could finish the fast break, he had a great jump hook with either hand and a good spot-up jumper and he was a remarkable passer with an uncanny ability to find the open man and deliver the exactly perfect pass. In short, he was a very, very complete player and a joy to coach, a totally dedicated team player whose only concern was winning.”

And win he did. In Walton’s first two years at UCLA, the Bruins went 60-0 on their way to winning a record 88 consecutive games and two titles, in ’72 and ’73, when he scored 44 points on 21-22 shooting in the deciding game. In three college seasons, Walton averaged 20.3 ppg, 15.7 rpg and 5.5 apg. In ’76-77, his third season in the NBA, he led the remarkably well-balanced Portland Trail Blazers to a title over Dr. J’s 76ers. Walton was dominant in the Finals, named MVP after tying single-game records for blocked shots (eight) and defensive rebounds (20). The doubts which had surrounded him during his first two injury-filled seasons-partly as a result of the sports world’s natural suspicions about a long-haired, vegetarian, Grateful Dead fanatic spouting counter-cultural opinions-seemed vanquished.

The next season, both Walton and the Blazers were even better. He was averaging 18.9 ppg, 13.2 rpg and 5.0 apg and the team was 50-10 when he went down with another injury. Walton’s abbreviated season was good enough to land him the MVP award, but nothing would ever be quite the same. Feeling that the Blazers pressured him to return in the playoffs before he was ready, leading to yet another injury, Walton sued the team and its doctor. He played in only 14 games over the next four seasons. When he finally came back, in ’82, it was with the woeful Los Angeles Clippers.

Then Walton was rescued by the Celtics and found himself once again playing for life, no longer the star but a key cog in a championships machine, finishing his carer on an up note. In ’93, he was elected to the Hall of Fame, and three years alter he was a controversial (in our eyes, at least) choice as one of 50 greatest players in NBA history. Nevertheless…

SLAM: In ’81, you and your doctors announced that your career ws over and the goal of your operations was simply living a normal life. Did you give up at that point?

BILL WALTON: You never give up, but you have to be realistic. The pain was so excruciating, the limitations so total, that you just have to be able to move on. I have been incredibly lucky in my life, learning life’s greatest lessons from my teachers, teammates, coaches and parents. Three things come to mind: [UCLA] coach [John] Wooden constantly speaking about the importance of what’s next in life and never looking at what’s passed; Larry Bird saying that life is like your jump shot: once it leaves your hand, there’s nothing you can do about it, and a message I got from one of my friends in the Grateful Dead. They gave me a nice, big autographed picture, and Mickey Hart, one of the drummers, wrote, “Never look back.” You just have to keep going. Basketball had always been my life, and it was incredibly tough to contemplate living without it. But as a warrior you train yourself to believe you can do anything, and it wasn’t until I had my ankle fused in 1990 that I really gave up.

I had 30 operations, and the first 29 were a piece of cake, because they were all about the dream that I could play basketball again. I went into the last operation knowing that I would never feel the wind blow through my hair again, never feel sweat just pouring off my body, never feel the exhilaration of a game. Basketball for me had always been a celebration of life and greatness and health, and even in the dark early days, I always felt that I could get that back. Once they fused my ankle in ’90, I knew that I would never run again. That was most difficult, though in retrospect it gave me new life. I can get around now, and I can sleep again, without the pain. I just didn’t realize that the same elements which made the basketball team so much fun are out there in the rest of the world, too.

SLAM: Your second NBA championship, with the ’86 Celtics, must have been extra sweet, since you were supposed to be finished as a player.

BW: Oh yes. Larry Bird, Red Auerbach and the Boston Celtics gave me my career-and my life-back. I finally came back from all the injuries and was not able to play quality basketball and had to endure so much losing with the Clippers. So it was a godsend to all of a sudden find myself once again able to experience the joy, spirit and happiness of championship team.

SLAM: How did that team compare to the ’77 Blazers?

BW: They were similar in the values and characteristics of all championship teams, which is that the team came first and foremost for everyone. But that Blazers team was one of the fastest and quickest of all time, and our success was a direct result of phenomenal pressure defense and a relentless, fast-breaking attack. We were the youngest team in the history of the NBA to win a championship. Everyone was 10 years older on the Celtics, who were also a terrific fast-breaking team, though we did not have the speed; rather it came from a suffocating halfcourt set defense and phenomenal rebounding. We also had incomparable individual stars in Larry Bird, Dennis Johnson, Robert Parish and Kevin McHale.

Now, the Trail Blazers team had the incomparable Maurice Lucas, who was just a fierce leader. He was an incredibly skilled basketball player in all aspects-he could shoot, pass, catch, really rebound and play very, very solid individual and team defense. But what really made him special was his sense of team, leadership and responsibility, as well as his commitment to success and his willingness to do whatever it took to win-including beating the other team up. He is still one of my best friends; my third son, Luke, is named after him.

SLAM: Lionel Hollins was another great player from that ’77 team.

BW: A phenomenal basketball player who had great skills, an incredible body and a heart as big as anyone’s. He loved the big plays and the big games, he was a phenomenal defensive ball hawk, he was great at pushing the fast break and he was a pretty darn good shooter.

SLAM: One of the team’s unsung heroes was Bobby Gross.

BW: That’s right. I’ve been really lucky to play with three phenomenal small forwards: Jamaal Wilkes, Bob Gross and Larry Bird, all of whom could turn the worst pass into a thing of grace. They were tremendous post feeders and great runners on the fast break who were also terrific at moving without the ball. And they were all completely aware of spacial relations, timing and plays involving numerous individuals, which is what I loved.

I was never a huge scorer, and I never liked the kind of offense where you just give it to one guy and everybody stands there and watches him go one on one. I like the team game where there’s very little dribbling, but lots of passing, cutting, screening and shooting. When you play like that there’s nothing the defense can do. It’s just a terrific feeling when the ball is hopping so much that you have the other guys’ heads spinning around.