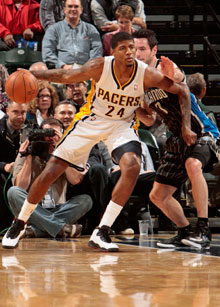 Can you imagine a Pacers–Magic series with both teams full strength in the first round? The very first round?! Forget about the Bulls, Heat and the rest of the Eastern Conference, the Pacers-Magic series had a chance to be special.

Each team plays in a relatively small market and thirsts for a Championship. This was supposed to be the “make or break” Playoff series for Dwight Howard as a member of the Magic. This was supposed to be the series that essentially defined Howard’s history. Will he begin to dominate games like most hoped for? Or would he be good, not great, leading to his departure out of Orlando?

We may not be getting the most intense first-round battle in the past few years, but we will be getting one heck of a series. Think about it: How badly does the Magic squad want to shut up the world and win without Dwight? Is there a less appreciated, more upset group of players in the NBA than this current Magic squad? Is there anyone in the world who wants to win this series more than Stan Van Gundy?

On the flip side, how sick are the Pacers of hearing about their “big brother” in the north and the Heatles down south? Who will emerge as the leader of a Pacers team that has the depth and legs to contend with anyone in the NBA? Is this the year the Pacers prove once and for all they have recovered and are back from the Reggie Miller era? Is this group equally as ticked off as the Magic at how little respect/love they’re getting from their own frickin’ home state, much less the world media?

After the injury to Darren Collison, Hill slid into the Pacers starting lineup late in the regular season and more than proved his worth as a starter. In his last nine games, he averaged nearly 14 ppg, 5.3 apg and is shooting 44.7 percent from the field. Without Howard, however, look for Nelson to take matters into his own hands more often. He scored 15.3 ppg in his last nine games compared to his season total of 11.9. Nelson’s minute total and usage total should both increase this series.

The shooting guard position should be the biggest mismatch for Indiana. George boasts a solid 5 inches, 25 pounds, and a heck of a lot more athleticism over Redick. Redick’s career-high, 31-point outburst against the Bobcats earlier this week may give him some shooting confidence for the series, but let’s be real here; it came against the Bobcats. Redick will struggle to get his shot off against George’s length and athleticism, and George should look to expose Redick while attacking the rim as well.

Granger has stepped up his play in April, netting 21.6 ppg over his season average 18.7. Richardson may look to start volume shooting with Howard’s departure, which will turn out very poorly for the Magic. According to Synergy Sports, Jason Richardson converts his “Short” jumper in the half court—17 feet and closer—14.8 percent of the time. He scored 24 points inside 17 feet on 48 possessions, which ranks in the bottom 7 percent of the League. Granger should exploit JRich’s weak shooting and help his big men clean the glass.

The power forward battle should prove to be the best position battle of the series by far. Anderson opened the eyes of every die-hard NBA fan and became the go-to guy in the post-Howard part of the Magic’s season. Synergy claims Anderson at the 94 percent for Jump shots in the half court, converting 61.2 percent of those jumpers. He positioned himself in the upper part of the League’s face-up 4 men, which is exactly what he will look to do against the Pacers. His counterpart, David West, will bring a much-needed veteran presence in the Playoffs to a young Pacer team. West will have his hands full with Anderson throughout the series, but he showed how valuable his defense has been to the Pacers all season long. He has allowed only 42 points in 68 possessions when guarding the pick and roll and going back to his man, ranking 84 percent in the League.

Talk about a strange matchup. Davis gives up at least 6 inches on Hibbert yet has a good 30 pounds on him. Hibbert should control this matchup with his length and will disrupt Davis’ shot attempts with relative ease. The All-Star center boasts 12.8 ppg and 8.8 rpg on the season and will thrive off put-back points in the series. Sorry Glen, but the height advantage may be a little more than you can handle this time.

They may not have the “Bench Mob” title or have their own website, but the Pacer bench proves to be the second deepest in the Eastern Conference. Tyler Hansbrough started most games last season before the addition of David West and provides some low-post scoring off the bench. George Hill seamlessly slid into the starting lineup, which means “Born Ready” may get his chance to shine in the postseason. Leandro Barbosa will give the Pacers quality minutes on the wing, and “LOUUUUUUUUU” Amundson brings a certain level of toughness and grit that can’t be taught. For the Magic, when your backups include Chris Duhon, Von Wafer, Justin Harper, Quentin Richardson and Daniel Orton, you do this…

Prediction: Talk about an all-out slugfest. These two teams have something to prove and want to get their point across badly. Two tough nosed, blue collar, badass teams will collide in Indianapolis on April 28 at 7 p.m. EST. As much as the Magic want to prove their worth without Dwight, their efforts should not knock off the deep and young Pacers. I don’t know about you guys, but I am expecting one heck of a show.