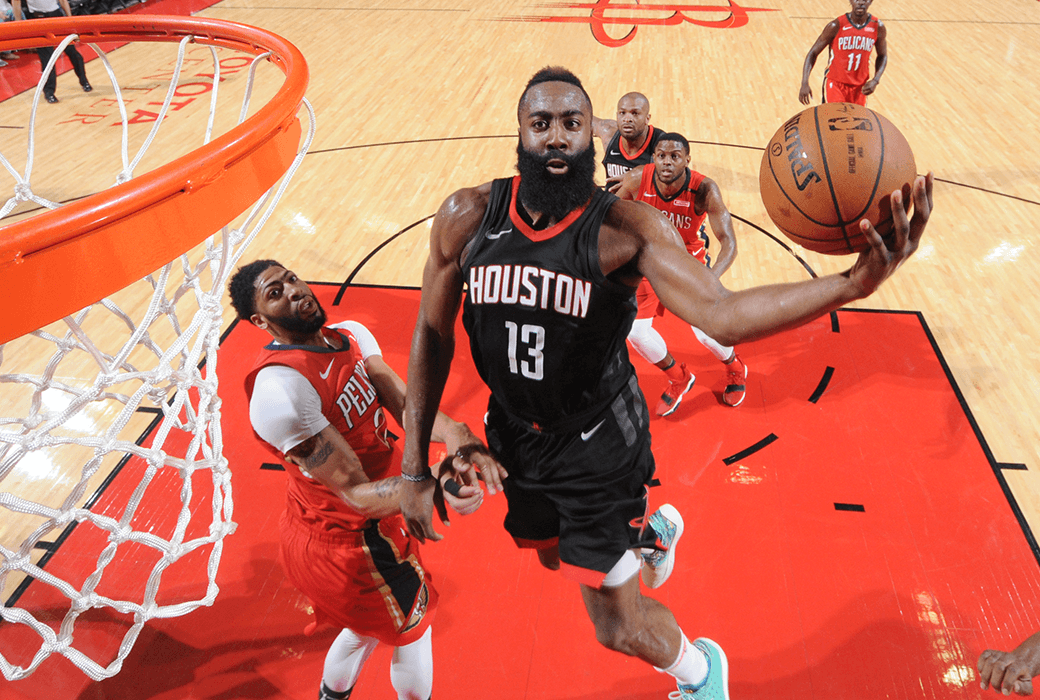 The Beard (27 points, six rebounds, eight assists) got the best of The Brow (25 points, eight rebounds, four blocks) as the Rockets won their franchise-best 59th game.

Houston ran out to a 27-point first half lead and never looked back as Eric Gordon scored 19 points and Clint Capela added 18 points, 16 rebounds, three steals and six blocks in just 28 minutes. Harden became the first player in the league to hit 2,000 points on the year during the blowout victory.

you can block Anthony Davis and STILL get put on a poster 🤦🏽‍♂️ (via @nbatv) pic.twitter.com/lHvN65AsKq

The Brow just stuffed The Beard 👀👀👀👀 (via @nba) pic.twitter.com/koPsGX7Ta7

The 76ers dominated the Timberwolves practically the entire night, leading by 27 before digging into their bench in the fourth quarter. As a unit, Philadelphia’s starters only played an average of 24 minutes.

Joel Embiid scored 19 points in just 24 minutes and Ben Simmons notched his 10th triple-double of the year with 15 points, 12 rebounds and 13 assists.

Six players scored in double-digits for the Timberwolves, but neither of Minnesota’s young stars were able to take the driver’s seat as Karl-Anthony Towns and Andrew Wiggins combined to shoot just 10-for-32 from the field.

NO SHOT IS A BAD SHOT FOR JAMAL CRAWFORD 💪🏽 (via @nba) pic.twitter.com/bpwBe6CdZr

Reggie Jackson hit a 3 on Detroit’s opening possession and the Pistons led the rest of the way as they scored 66 points in the first half.

Andre Drummond anchored the Pistons with 15 points, 20 rebounds, four blocks, four steals and four assists–just the sixth time in NBA history that stat line has been recorded and the first time since 1986.

Anthony Tolliver chipped in 25 points off the bench in 26 minutes.

Devin Booker didn’t have a chance to get buckets on the one-year anniversary of his 70-point game as he was given the day off by coaches.

Phoenix, who has lost an league-high 11 straight games, maintained the top lottery spot as they fell to Orlando, who moved down to fifth behind Dallas in the lottery standings.

Josh Jackson led the Suns with 18 while Orlando’s frontcourt duo of Aaron Gordon and Nikola Vucevic scored 29 and 24 each.

Tied up through three quarters, the Lakers needed a run to close the game in order to down the Grizzlies at the FedEx Forum. Each of the Lakers’ starters had to play at least 35 minutes as regular contributors Brandon Ingram and Isaiah Thomas all sat due to a coach’s decision. Luol Deng and Channing Frye were both inactive as well.

Kyle Kuzma scored a team-high 25 points, five of which came in the final minute, and Lonzo Ball chipped in 12 points, eight rebounds and 10 assists.

JaMychal Green finished with 17 points, 16 rebounds and two blocks as Memphis stayed in the running for the top draft lottery position.

Despite a strong fourth quarter, the Mavericks weren’t able to complete their comeback attempt as the Hornets pushed their win-streak to three. Kemba Walker led all scorers for the second consecutive game as he dropped 24 and the Dwight Howard renaissance continued with 18 points and 23 rebounds.