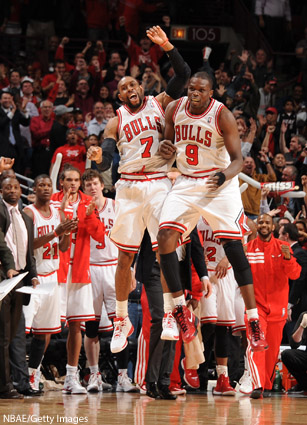 After a night like we had on Wednesday, you were either looking for a breather or salivating for more. Thursday we got a bit of both, with just 5 games on the docket, but at least one with major implications. And yes, I mean Pistons-Bobcats. (Not really.)

I’m not a gambling man (The Post Up doesn’t pay enough for me to be making it rain like that) but if I were, I wonder how much cake I’d be rolling in if I’d simply bet against the Bobcats, points included, every single night of the NBA season. Charlotte gets blown out by everyone, every night. Even the League’s worst teams think the Bobcats are terrible. Coming in, only 2 NBA teams had fewer road victories than the Pistons. But Detroit showed up in Charlotte and shot 60 percent for most of the game until emptying the bench in the fourth quarter (they finished at 53 percent from the field)—they are the 5th ‘Cats opponent in the last 6 games to shoot better than 50 percent. Greg Monroe collected 25 points, 11 rebounds and 4 assists to lead the Pistons (now 22-36). And here I was thinking that shutting down Corey Maggette for the year might actually help those poor saps down South.

When LeBron James hit a corner 3-pointer to give Miami a 2-point lead with 49 seconds left, the Bulls looked cooked. But a ballsy coaching move by Tom Thibodeau to take a struggling Derrick Rose off the floor (and a missed free throw by LBJ) opened the door for CJ Watson to make the shot of the night—a step-back three over Dwyane Wade to send the game to overtime. The shot was the signature moment of Watson’s great night—he had 16 points and 9 assists in 27 minutes. In the overtime period, the Bulls held Miami without a single made field goal, and rode Watson’s momentum to the win. Chicago’s bench outscored the Heat’s 47 to 7, inlcuding red-hot shooting from Kyle Korver (17 points, 5 threes) and a solid contribution from Taj Gibson (11 points). Had Chicago taken the L, all the talk from this game probably would have centered around Rose’s abysmal 1-13 shooting night, which saw him finish with a career-low 2 points. And his lack of late PT—hell, dude didn’t take off his warm-ups in overtime—is still going to be a polarizing topic (would you have had the stones to pull him?) but Miami’s inability to close might be more salacious. LeBron led all scorers with 30 points, DWade had 21 and Chris Bosh had 20, but the Heat’s Big Three were essentially out-played down the stretch by Watson, Korver and Gibson.

It should have been another chance to gauge the “best young power forward” debate between Kevin Love and Blake Griffin, but once again Javale McGee ruined something—this time with an errant elbow to Love’s face the other night. Instead, with Love not around to defend him, Griffin had a monster game, racking up 19 points and 13 rebounds, plus 5 assists and no turnovers as the Clippers handed the Wolves their 8th straight loss. Derrick Williams struggled in place of Love—he couldn’t handle Griffin, and he couldn’t get his own shot going either, shooting just 1-7 with 4 points and 4 turnovers one night after scoring 27 points against the Nuggets. Chris Paul was mostly looking to facilitate for others (8 assists, 8 points), which once again included Mo Williams (14 points, 5 dimes in his return from injury).

Had you just awoken from a decade-long coma, it might not have been so surprising to see Tim Duncan getting the ball possession after possession in isolation situations (what San Antonio calls “4-Down”) in the fourth quarter of a basketball game—and even less surprising to see him score at will. But this is 2012, where Duncan is supposed to be old and over the hill. Would a 28-point, 12-rebound explosion change your mind? Duncan scored 20 in the first half en route to a season-high in points and a big-time win for the Spurs, one night after being embarrassed by Andrew Bynum and the Lakers. The Grizzlies’ big men had nice nights, too, with double-doubles for both Marc Gasol (14×10) and Zach Randolph (10×11), but San Antonio completed the season sweep of Memphis thanks to a time travel-ish performance from the original Big Three. On top of TD’s numbers, Tony Parker had 13 points and 9 assists, and Manu Ginobili came off the pine to post 20 points, 6 rebounds and 4 assists.

Dirk Nowitzki scored 27 points, Jason Kidd finished 1 point shy of a triple-double (12 assists, 10 rebounds, 9 points) and the Mavericks shot 50 percent from the field to beat the overmatched Warriors and improve to 33-26 on the year. Jason Terry and Brandan Wright each scored 16 off the bench, part of a 57-point bench effort for Dallas, to just 33 points from Golden State’s reserves. With the win, the defending champs took over sole possession of the 6-seed in the West—which should last all of 24 hours. As always, Golden State managed to be exciting even in defeat. David Lee led the Dubs in scoring with a game-high 30 points, while rookie Klay Thompson continues to show that he may a piece to build around, as he went for 24 points, 7 rebounds and 8 assists. Like the prospect of a Thompson-Steph Curry (healthy) backcourt next season?

Lines of the Night: Tim Duncan turns back the clock for 28 and 12, while CJ Watson posted an incredible +38 plus-minus rating in less than 30 minutes of action.

Moment of the Night: CJ Watson drills the cold-blooded step-back 3 over DWade to send the game to OT.

Dunk of the Night: Or, in this case, non-dunk. Because if we’re going to pump him up for the good ones, we’ve got to show the bad, too. Come on, Blake.

Tonight: Pete’s back to hold things down over the weekend. I’ll be back Monday, when I’m sure absolutely no one will want to talk about Sunday’s Heat-Knicks game. Be easy, people.