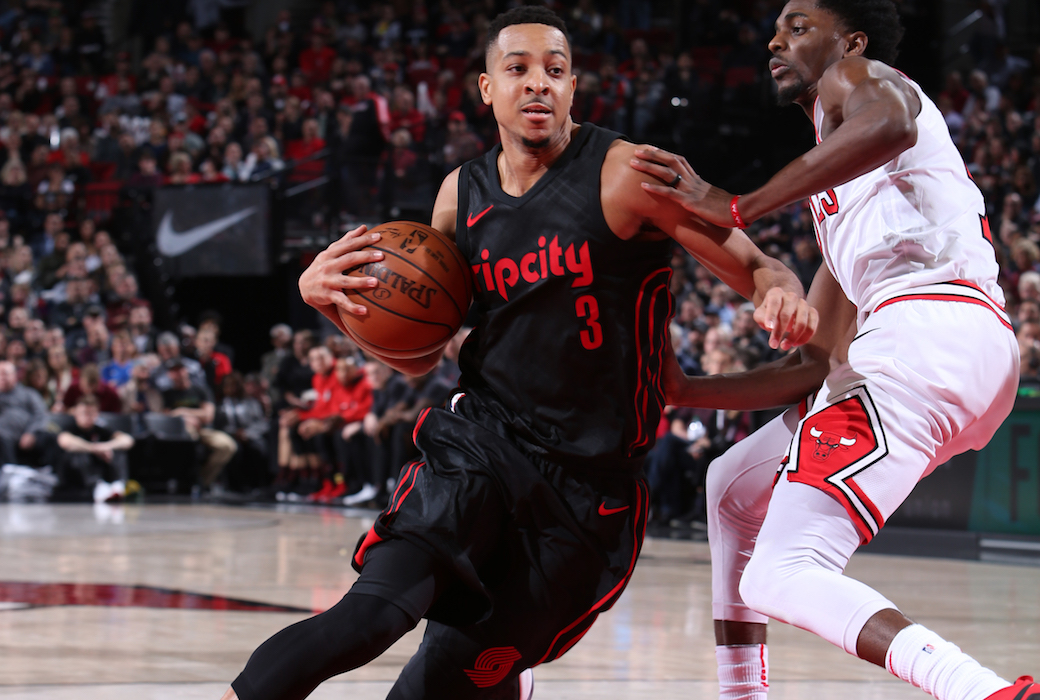 CJ McCollum had the greatest first quarter of his life — and of anyone in Trail Blazers history. He scored a franchise-record 28 points in the opening 12 minutes en route to 50 for the game, done essentially in three quarters, on 18-25 shooting. Portland led 43-19 at the end of the quarter in a game that was never close. Zach Lavine had 23 for the Bulls.

Myles Turner hit the go-ahead free throws with 34 seconds left to put the Pacers over the Grizzlies in a thriller. The Pacers followed those free throws with a defensive stand, preventing Memphis from getting a clean look. Bojan Bogdanovic had 21 points to lead seven Pacers players in double figures. Wayne Selden had 24 on 6-10 shooting from three.

The Magic scored 43 points in the third quarter, making nine threes in the process, to give them their highest-scoring quarter of the season. Evan Fournier hit four of those threes en route to 19 total points. Marreese Speights had 21 to lead the Magic. As for the Lakers, Julius Randle and Jordan Clarkson each had 20. As a team, L.A. went 4-20 from three.

Kemba Walker (38 points) set a franchise record with nine made threes, Nicolas Batum (10 points, 10 assists, 11 rebounds) had a triple-double, and Dwight Howard (20 points, 12 rebounds) had a statement dunk to help the Hornets over the Hawks. Kemba did his damage on 9-13 shooting from three and the Hornets went 17-32 from distance overall. Kent Bazemore had 25 for the Hawks.

Dwight Howard. This is outrageous. 💪💪💪 (via @nba) pic.twitter.com/I8lqX09LDs

Spencer Dinwiddie scored 27 points and Jarrett Allen had 16 points and 12 rebounds to help the Nets snap their four-game losing streak. Joel Embiid had game highs in points (29) and rebounds (16) to lead the Sixers.

The Cavs barely held on to a win over the Heat in their first game without the injured Kevin Love. With Miami playing from behind in the final minute, Cleveland tightened up defensively, not allowing the Heat to attempt a game-tying shot in their final possession. LeBron James had 24 points and 11 boards, but the Cavs shot just 35 percent for the game and 23 percent from three.

In a game they already had under control, the Celtics held the Knicks to just eight points in the fourth quarter to turn a comfortable win into a laugher. Overall, Boston outscored New York 22-8 in the fourth quarter and 53-38 in the second half. The Knicks’ numbers reflected their struggles. They shot 32 percent for the game and went 3-17 from three. Enes Kanter did his part with 17 points and 17 rebounds, but six Celtics scored in double figures, led by Marcus Morris, who had 20. Terry Rozier (17 points, 10 assists, 11 rebounds) also recorded a triple-double in his first career start.

Something in the water in Boston tonight? Sheesh. 🔥🔥🔥 (via @Celtics) pic.twitter.com/k1xIwQak4W

Josh Jackson scored 21 points and T.J. Warren had 20 to power the Suns over the Mavericks in the NBA’s night cap. The win snapped a five-game losing streak for Phoenix, but it came at a cost. Late in the first quarter, Isaiah Canaan took a hard fall and suffered a gruesome leg injury. The team later announced that he has a fractured left ankle. Dennis Smith Jr. had 17 to lead the Mavericks.