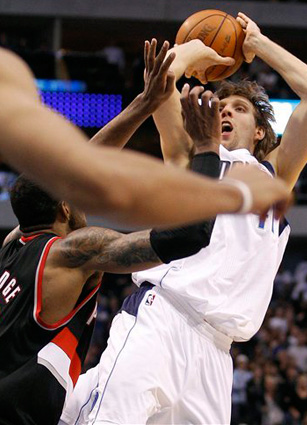 Another GREAT night of games last night featuring some fire old-school ABA jerseys. Last night saw a great cross-conference matchup between the Nugs and the Pacers, another 20 point effort from Jeremy Lin and a double overtime thriller between the Mavs and the Blazers. Catch up on all the action below…

With last night’s loss to the Clippers, Charlotte has now lost 14 straight games…14!! The Bobcats are last in the league in points and have been outscored by an average of 14.6 points a game. Over their last five games, Charlotte has averaged 78.6 points and are shooting 37.7 percent–Paul Silas is too old for this sh*t. During last night’s game, the Clippers absolutely dominated Charlotte in the paint. Behind Blake Griffin’s game-high 21 points and 10 rebounds (his fifth straight double-double), Lob City outscored their opponent 50-28 and outrebounded them 48-32 down low. Chris Paul filled up the stat sheet last night with 18 points, 14 assists (including this beautiful dime to Blake), 5 boards and 2 steals and committed just one turnover. All five starters scored in double-digits for LA including 16 from Caron Butler and an 11 point, 12 rebound outing from DeAndre Jordan. For Charlotte, rookie Kemba Walker scored 19; he has now scored in double digits in 17 games this season.

In a game pitting two very similar teams against one another, it’s no surprise that this one came down to the wire. Both the Nuggets and Pacers have built comparable rosters: each has a lighting quick point guard (Collison and Lawson), small forwards who can score in a variety of ways (Granger, pre-injury Gallo), tough interior play (Hibbert and Nene) and a deep bench. Both rely on strong team play instead of one or two superstars, and both find themselves in the top half of their respective conferences. But, both teams find themselves slipping a little bit. Last night snapped Denver’s five-game losing streak, while Indy dropped their fourth in five games. The Nuggets built up a 12-point fourth quarter before Paul George hit a pair of 3-pointer and Darren Collison managed a three-point play during a 13-2 run that cut the lead to one. With Indy trailing by two with a chance to tie, David West committed a turnover that effectively ended the game and the Nuggets escaped with a win. There were some big numbers in this one: Ty Lawson had 27 points, Aaron Afflalo had 23 and Corey Brewer had 19. For the Pacers, Danny Granger had 26, David West had 22 and 7 boards and Paul George had 15 and 6 rebounds. There were also a number of great highlight plays, including Kenneth Faried’s dunk on the break, Nene’s slam in traffic and Born Ready’s steal and breakaway dunk.

After a tough loss to the Clippers on Friday night, the Sixers bounced back nicely with a 15 point victory over the Cavaliers. With the Cavs missing Kyrie Irving (concussion), Anderson Varejao (wrist fracture) and Anthony Parker (back strain) Philly took complete advantage. The Sixers led 58-41 at the half and never let the Cavs get within 13. Once again, the Night Shift contributed with great minutes. Thaddeus Young finished with 16 points and 6 boards, Lou Williams had 19 and 5 assists, and Nikola Vucevic chipped in with 10 points. Jrue Holiday led the Sixers with 20 points and 5 assists. The Cavs were led by Antawn Jamison who had another strong game with 20 points and 8 boards, but Cleveland only shot 37 percent from the field and missed 11 three-pointers. This was an important victory for the Sixers. After tough losses to the Spurs and Clippers, Illadelph took care of business against a weakened Cleveland team–the mark of a good team.

Six Spurs scored in double-digits last night as San Antonio beat the Nets easily at home. Gary Neal led the Spurs with 18 points, Tim Duncan had 13 and 10 rebounds and Tony Parker had 12 points and 5 dimes. In his first game back since breaking his hand early in the season, Manu Ginobili had 8 points and 4 assists in 17 minutes of play. Jersey, who is now 8-21, allowed the Spurs to shoot over 50 percent and were outscored 50-34 in the paint. Deron Williams had 27 points and 8 assists but didn’t get much help elsewhere.

I don’t think the Knicks would have won this game a few weeks ago. But, the Knicks hung tough and were

able to pull out a great win out in Minnesota. With Jeremy Lin running the show, this team looks much more confident and they believe that they can win–a complete 180 from just a month ago when they looked tentative and hopeless. New York showed great resilience against a talented Wolves team and kept coming back after falling behind and eventually were able to pull out a two-point win. Kevin Love continued his dominance over the Knicks; this time going for a game high 32 points and 21 rebounds. In his last three games against the Knicks, he has averaged 32 points and 22 rebounds–ridiculous. The Knicks were noticeably fatigued last night and when their shots stopped falling thy relied on defense to get the job done. New York forced 2o turnovers which led to 29 points and held the T’Wolves to 11 points in the fourth. Steve Novak, who has been thriving in D’Antoni’s system ever since Lin took over, hit two huge three-pointers late in the game–including a game tying shot with 36 seconds left to give his team the boost they needed. After getting fouled heading to the hoop, Lin hit one of two free throws, effectively icing the game. Along with Novak’s 15, four other players scored in double-digits. Lin continued his amazing stretch with his fifth straight 20 point game and added 8 assists and 6 boards. Rookie Iman Shumpert had 20 before fouling out late in the game and Tyson Chandler had 12 points and 7 boards and provided his team with interior toughness. For the T’Wolves, Nikola Pekovic took a night off from his bouncing position to score 21 points and grabbed 13 rebounds while Ricky Rubio had 12 and 8 assists but had a pair of costly turnovers late in the fourth.

After missing two potential game-winning shots at the end of regulation and in the first overtime session, Dirk Nowitzki nailed a fadeaway with 16.9 seconds left in the second overtime to push the Mavs to victory. Dirk led the Mavs with 20 points and 9 boards while JET had 19 and 6 boards off the pine. Along with JET’s 19, the Mavs scored 44 points off the bench and shot 46 percent as a team. Leading by as many as 18, the Mavericks allowed Portland to rally and force overtime thanks to 23 Dallas turnovers (6 by JET) which led to 23 points for the Blazers. LaMarcus Aldridge had another huge game, going for 33 points and 12 rebounds back in his hometown. Aldridge also hit a clutch turnaround jumper to tie the game with 12.9 seconds left in regulation and force overtime. Jamal Crawford chipped in with 19 off the bench and Gerald Wallace had a double-double with 10 points and 10 boards. Despite being the oldest team in the league, the Mavs are now 7-3 on the second night of a back-to-back. The Blazers are now 15-13 and have struggled mightily away from the Rose Garden; they are 4-10 on the road.

After a Milwaukee fan told Jason Richardson he was “washed up” in the first quarter, JRich responded with 31 points thanks to nine 3-pointers. Richardson hit four 3’s during a 16-0 fourth quarter run that allowed the Magic to storm back from a ten point deficit. Dwight Howard struggled offensively but still managed to fill up the stat sheet. He only had 11 points, but helped his team with 14 boards and 4 blocks. Hedo Turkoglu had 19 and 6 assists and J.J. Reddick finished with 14 off the bench. Drew Gooden continues to fill in nicely while Andrew Bogut sits out due to injury. Gooden had 21 points, 8 boards and 4 assists and has been playing great for Milwaukee over the last month. Brandon Jennings’ struggles continue; last night, Jennings shot 3-14 and 0-5 from behind the arc. Over the last six games, Jennings is shooting 31.7 percent and Milwaukee has looked much more cohesive with Beno Udrih running the point.

Jared Dudley had a team-high 20 points and 10 boards and Steve Nash dropped 15 dimes as Phoenix cruised to a 14-point dub over Sacramento. After getting within 7 points in the third quarter, the Kings could not overcome the poor play of ‘Reke Evans, who scored just 4 points on 1-9 shooting. Boogie Cousins did all he could leading Sacramento with 26 points and 9 rebounds but he did not get any help from his teammates. Rookie Markieff Morris played a great game, scoring 18 points and grabbing 6 boards while Marcin Gortat had 15 and 7 rebounds. The Suns shot 50 percent from the field while holding Sacramento to 35 percent shooting in the easy victory.

Stat Line of the Night: Kevin Love with 32 points and 21 rebounds in a losing effort.

Dunks of the Night: Blake with two huge dunks.

Nene goes hard in the paint.

Tonight: Abe is back to take you through the week. The action kicks off with the Bulls and Celtics and Heat vs. Hawks amongst others. Have a great week everybody.