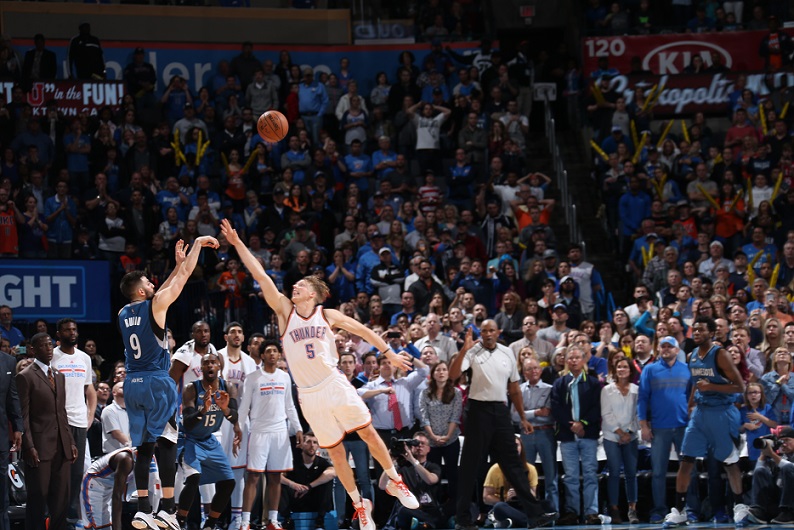 OKC received excellent showings from Kevin Durant and Russell Westbrook, but would be stunned at the end of regulation by a dagger three-ball from Ricky Rubio.

T’Wolves head coach Sam Mitchell was thrilled at his team’s effort in a tough road match-up.

“Think about it, these guys are averaging 110 points a game and we held them to 14 points below their average,” Mitchell said. “For these guys to step up and take the challenge on the road, and this is a tough building to play in, it was just a great win for us.”

Anthony Davis (25 points), and Jrue Holiday (34 points) gave Memphis all they could handle, but ultimately succumbed to the Grizzlies in an entertaining overtime duel. Jeff Green posted a double-double, but the heroes for coach Dave Joerger’s team were Lance Stephenson and Matt Barnes. Stephenson went off for a career-high 33 points, while Barnes dropped a triple-double on New Orleans.

Slam Dunk Contest runner-up Aaron Gordon provided a double-double with 20 points and 11 boards, handing Sacramento their fourth consecutive loss. DeMarcus Cousins was notably absent from action in the defeat, as he served a one-game suspension handed down by the team’s front office. If Boogie’s Instagram posts are of any indication, the suspension didn’t resonate with the two-time All-Star.

DeMarcus Cousins was suspended today. He was also guilty of triple posting on Instagram. 😳https://t.co/pqXmXrDlgh pic.twitter.com/4st6w8AGrG

The Hornets cruised to their sixth straight victory thanks to 22 points from Marvin Williams and a double-double from Nicolas Batum. Charlotte now claims sole possession of fifth place in the Eastern Conference, while the Pistons cling onto eighth place.

The 76ers endured a scary moment in this contest, as a collision between Robert Covington and Jerami Grant forced each player out of the game. With Jahlil Okafor out for the year, Philly’s depth chart will be thin for their match-up with Detroit tomorrow night. Speaking of which…

Happy Birthday to the one and only Old School Chevy, Elton Brand! 🎉🎉 pic.twitter.com/HQogAmqLpU

Despite getting caught flat-footed on a slick Isaiah Thomas move in the first quarter, James Harden would score 32 points, leading Houston to their third straight victory. Another noteworthy performance came from Michael Beasley, who posted his best stat line since returning from International ball.

Having dropped six of their last eight, the Bulls are having a difficult enough time as is…with Jimmy Butler and Derrick Rose each sidelined with injuries, it’s virtually impossible for this team to contend. Goran Dragic led the way with 26 points, while Hassan Whiteside came off the bench to grab 16 boards. With hopes of returning this season, Chris Bosh delivered words of encouragement to his team.

Way to bounce back fellas! My youngin @J_Rich1 is ballin!!!!! #HeatNation

The Trail Blazers and Warriors engaged in an unprecedented three-point shootout, making at least 18 treys each for the first time in league history. The Splash Bros were the usual culprits for Golden State, as Stephen Curry and Klay Thompson combined for 15 of the Warriors’ 18 long-balls. Meanwhile, the Trail Blazers distributed the workload, as Al-Farouq Aminu, Damian Lillard, C.J. McCollum, Meyers Leonard, Gerald Henderson, and Brian Roberts all hit multiple shots from beyond the arc.

Shelvin Mack stole the show with a career-high 27 points, shooting 11-of-17 from the floor while notching four steals. The Wizards received 24 points from John Wall but little help elsewhere, leading to Washington’s fourth-straight loss.

It was a new career-high of 27 points for @ShelvinMack!

Kristaps Porzingis, Carmelo Anthony, and Robin Lopez scored 20-plus points each; unfortunately, only one other player scored in double-digits, allowing the Clippers to eke out a victory. Despite a lukewarm start as New York’s interim coach, Phil Jackson told reporters today he’d like Kurt Rambis to return next season.

“He has a way of handling players. He’s relaxed, yet he has the ability to keep them focused on the important parts of it. He’s a defensive-oriented guy. I had him as my defensive coordinator for my teams in 2007, ’08 and ’09. And I think he has a real good handle on that part.”