Post Up: Kevin Durant Takes Over in Fourth Quarter vs. Knicks 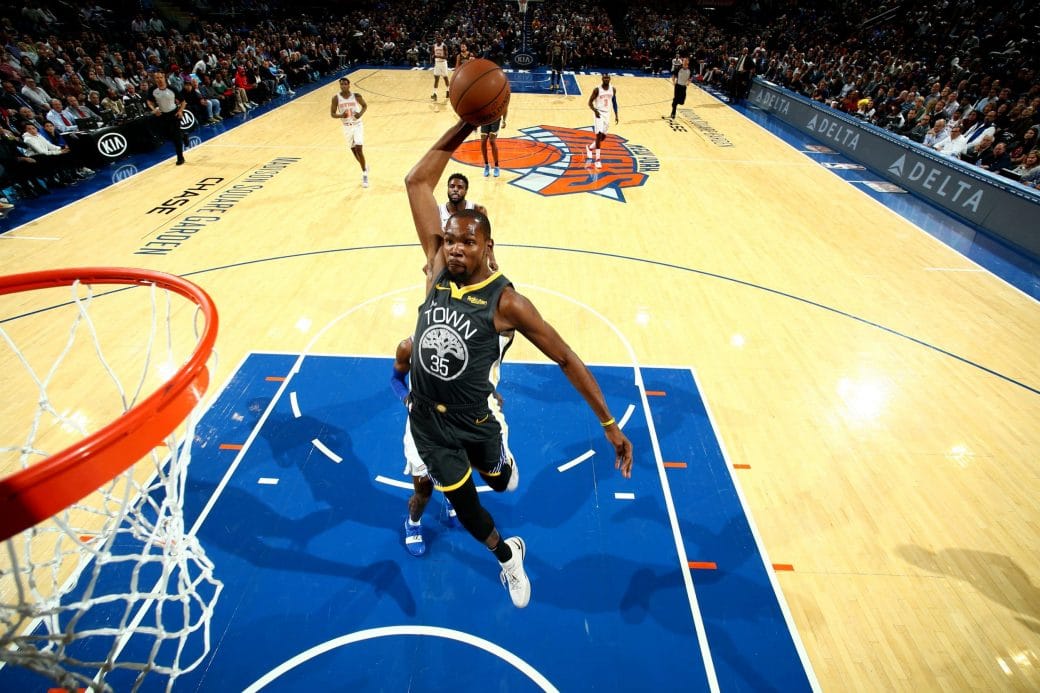 Kevin Durant stepped up big time in the Big Apple. Durant dropped 41 points on the Knicks, who had no stop for him. New York flirted with the upset coming into the fourth quarter, but Durant turned it on in closing time, registering 25 points in the final period and hitting tough bucket after tough bucket. The performance evoked Durant’s infamous run at Rucker Park.

LOOK at these two shots compared to one another. He really did hit 'em with the Rucker Park special pic.twitter.com/TX3TlSAKgs

Another night, another game dominated by the Pelicans duo of Jrue Holiday and Anthony Davis. Holiday came up clutch with three seconds left to put New Orleans up for good; he finished with 26 points and five assists. Davis put in 18 points, 14 rebounds and five blocks as well.

D’Angelo Russell kept Brooklyn in it until the final buzzer with 24 points, five rebounds and four assists.

Jrue Holiday for the WIN (via @NBA) pic.twitter.com/51L5Cz6UfO

The Raptors’ win in this one pushed their record to 6-0, the best start in franchise history. Kawhi Leonard kept up his impressive comeback season with 21 points, nine rebounds and five assists on the night. Teammate Kyle Lowry added 20 points and 12 assists as well.

Then we hit ‘em with the hotline
K. Lowry with the dance moves pic.twitter.com/4Kk4rFaqrX

Kemba Walker put on a show in Charlotte, dancing and driving his way to 30 points in just 26 minutes. Miles Bridges and Michael Kidd-Gilchrist each added 15 points of their own off the bench. Zach LaVine continued his strong start to the season with 20 points for the Bulls.

Kemba isn't playing around this season. 🔥

James Harden’s absence was too much to make up for, with Houston struggling to get much scoring from its starters. However, Carmelo Anthony wasn’t to blame for that, putting in 24 points during his first start of the season.

Lou Williams and Montrezl Harrell dominated Houston off the bench with a combined 53 points.

Montrezl Harrell rolls for the SLAM!

Every single Buck that touched the floor Friday night scored; this balanced attack from Milwaukee meant Giannis Antetokounmpo only had to play 23 minutes with the win in tow from the jump. Khris Middleton and Ersan Ilyasova shared the team lead for points with 16 each.

De'Aaron Fox ain't playing around this year 💪 (via @NBATV) pic.twitter.com/7YdZKR2Dff

RELATED:
Kevin Durant: ‘I Am Thinking About the Money I’m Going to Get’