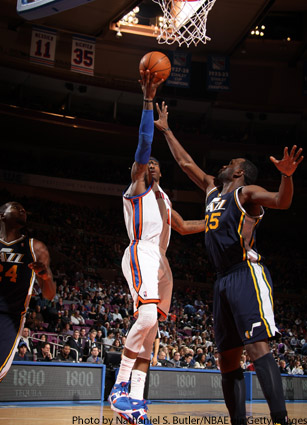 No Eric Gordon, but the Clips squeaked out their sixth road win of the season, led by Blake Griffin (17 points, 15 boards) and Mo Williams (17 points, 7 dimes). The Bobcats had to assume that trading Gerald Wallace would hurt their Playoff chances, and indeed it did, as the team is now 1-5 since the trade and currently sits at ninth in the East, steady headed in the wrong direction.

Dwight Howard got a DNP: Too Many Techs, allowing the Blazers to complete their season sweep of the Magic down in Orlando. LaMarcus Aldridge led ’em with 24, while Gerald Wallace went for 9 points and 10 boards. No surprises here: The Magic just aren’t the same without that big dude in the paint. For what it’s worth, Orlando still outrebounded and outblocked Portland—but they didn’t outscore them (in the paint, or in the game), and that’s the important part. Or so I’m told.

You can really just peep everything I said yesterday about the Knicks,, because it all applies once again after this one. NYK ran all over the Jazz, led by a combined 65 points from superstars Amar’e Stoudemire and Carmelo Anthony. And though Utah as a whole was completely shut down, Al Jefferson sneakily had his way, scoring 36 and grabbing 12.

CP3‘s head injury from two nights back meant we weren’t treated to Paul-Rose, and it also opened the door for the Bulls to defeat the Bees relatively easily. The Hornets did compete, but couldn’t manage a clutch bucket during the final few minutes, as Chicago jumped ahead and held on for the W. Rose put in 24 and dished 9, while Jarrett Jack led NO with 23.

While the top six or so teams in the East (OK, seven; I see you, Philly) are starting to heat up and ready themselves for the postseason, things in the West are just looking, I don’t know, weird. Squads like the Grizzlies are still winning games like these, and more importantly, squads like the Thunder are still losing ’em. And, most notably, Memphis is doing it without Rudy Gay. But all five Grizz starters finished in double figures, and Tony Allen (20 points) held Kevin Durant to just 23, as Memphis won its third of the last four. OKC had its opportunities, but just couldn’t get a stop down the stretch, and was held a short distance away for the entirety of the tilt’s final minutes. The Grizzlies now return home, where they host the Knicks tomorrow night.

Elsewhere in the West, the Mavs won unconvincingly behind Dirk Nowitzki (25 points) and a timely hoop or two from Brian Cardinal (hey!), who dropped a season-high 12. The TWolves had something to celebrate, though, as Kevin Love (23 points, 17 boards) tied Moses Malone’s since-the-merger record of 51 consecutive double-doubles, which Malone accomplished in 1978-79. (Malone’s streak spanned two seasons, making Love’s the longest single-season mark.) Respect.

Storming towards the top eight in the West is Houston, who continues to pile up Ws and should have the Grizzlies shaking in their—I don’t know, what kind of footwear do Grizzlies use? This easy victory gave Rockets coach Rick Adelman his 935th win, which means he’s now tied with Dick Motta for the 10th spot on the NBA’s all-time list. Having won seven of eight, Houston now stands at 33-32, the first time this season the team has risen beyond the .500 point. Chase Budinger led the Rockets with 20.

Last Call: Professor Griff, still jumping around night in and night out.