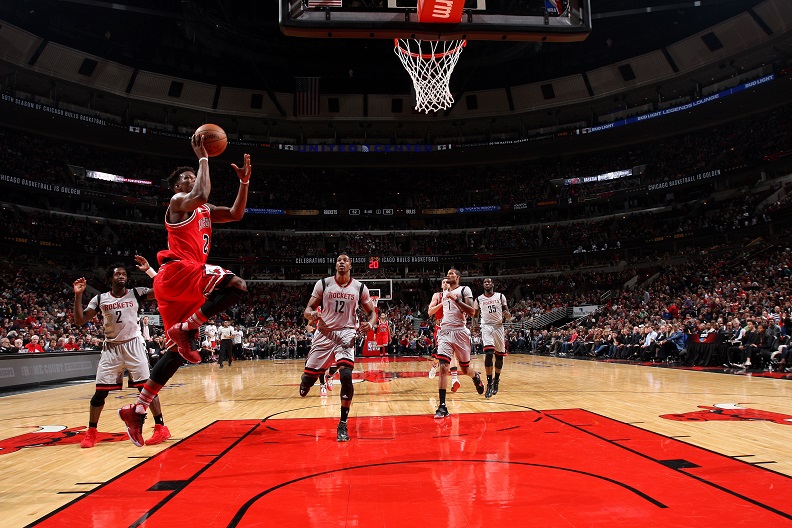 Sidelined with a knee injury since February 5th, Jimmy Butler made his triumphant return to the Bulls’ lineup, scoring 24 points with 11 boards before fouling out in the fourth quarter. Pau Gasol (28 points) and Derrick Rose (17 points) helped ensure Butler’s return would be a victorious one.

Jimmy Buckets showing off hops in his return to the lineup!https://t.co/cRCPeXJdhf

The Rockets, meanwhile, received 36 points from James Harden, and 12 boards from Dwight Howard, but have now dropped three of their last four. What’s more, critiques of Houston’s defense continue to hold water.

A lopsided second quarter guided interim coach Kurt Rambis’ Knicks to their first win since Feb 27. Arron Afflalo got the bench on their feet at one point with this dazzling crossover on Kentavious Caldwell-Pope.

“We should all be disappointed. It was ridiculous. We were just terrible. We didn’t bring any energy to the game. We didn’t play well at either end. Yeah, it was an embarrassing performance.”

LeBron James stuffed his stat sheet to the tune of 28 points, 11 boards, 8 assists, and 2 steals in Cleveland’s third straight victory. Avery Bradley did his part to provide fireworks in an otherwise disappointing loss; crossing up King James before hitting an open jumper.

Anthony Davis managed to score 29 points despite a gaudy 11-for-31 mark from the field, but the Pelicans otherwise received just 19 points from their starting unit in a losing effort Saturday. Rudy Gobert dominated the paint with 18 boards and 2 blocks, while Derrick Favors and Gordon Hayward paired up nicely for a combined 52 points as Utah snapped a five-game skid.

Paul George hit a pair of free throws with three seconds left in regulation to cap a brilliant 38-point effort. John Wall may have committed 7 turnovers while shooting 9-of-24 from the field, but his circus and-one shot will be on highlight reels for the foreseeable future.

Minnesota’s young crop of talent rose to the occasion against Brooklyn, as Karl-Anthony Towns was one of three T’Wolves to exceed 20 points in Saturday’s W. The team shot a franchise record 68.4 percent from the field, and staved off a 39-point fourth quarter from the Nets.

Manu Ginobili returned from a 12-game absence to score 22 points over just 15 minutes, helping the short-handed Spurs dispatch of the Kings. Despite facing a team resting Tim Duncan, LaMarcus Aldridge, and Danny Green, the Kings fell to 1-5 over their last six games, and helped the Spurs reach an impressive milestone.

Paul Millsap and Jeff Teague combined for 42 points, and Dennis Schroder dropped 16 off the bench to put away the surging Clippers. DeAndre Jordan and Chris Paul combined for 34 points, while Jeff Green continued to fill in nicely for Blake Griffin, adding 14 points with 5 rebounds.