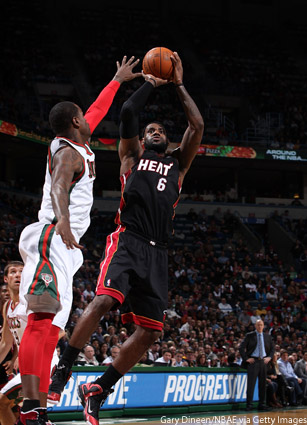 I’ll admit it—I nodded off during the second and third quarters of the early games. Your boy was tired. But when I woke up, I was pleasantly surprised by the games in progress, and got a few more goodies later on in the night, from LBJ going HAM on the Bucks to the Clippers nearly stealing one in Dallas despite Blake Griffin’s inability to make a darn free throw. Let’s get to it.

Ain’t much to cheer for these days in Charlotte, but give the Bobcats credit for at least keeping this one close. Reggie Williams (14 points, 5-13 shooting) made it a three-point game at 84-81 with 5 minutes to play on a driving bucket. But in the end, the Sixers just proved to be too much for the ‘Cats, as Lou Williams poured in 23 points (including the win-sealing trey in the game’s final minute) in his normal sixth man role, Thaddeus Young had 20 off the bench and Jrue Holiday scored 19. Philly (20-9) got a nice boost from Nikola Vucevic, too, as the rookie big man came in and gave the Sixers 27 quality minutes, finishing with 10 rebounds, 8 points and 2 blocked shots. Fellow rookie Kemba Walker did his best to keep Charlotte alive, scoring 21 points (on 6-15 shots) and Corey Maggette scored a season-high 22, but the Sixers turned it over only 7 times—Philly is crazy good at keeping turnovers low. And, just for fun, peep a classically odd Boris Diaw line: 39 minutes, 10 assists, 5 boards and as many fouls as points (2, on 1-3 shooting). Keep doing you, Boris.

Kevin Love (19 points, 15 rebounds), Ricky Rubio (11 points, 8 assists) and Nikola Pekovic (16 points, 13 boards) all had nice games for the Wolves, but Minnesota turned the ball over 18 times and six Magic players scored in double figures as Orlando improved to 18-11 on the year. One night after dropping 31 in a win over Milwaukee, Jason Richardson again led the Magic with 17 points, despite not playing a single minute of the fourth quarter—Stan Van went with JJ Redick’s hot hand. Redick, Jameer Nelson (!) and Hedo Turkoglu scored 14 points apiece, while Dwight Howard battled foul trouble to just 11 points and 7 boards. After ruffling some feathers with his comments about wanting the ball down the stretch, Dwight wasn’t even on the court for much of the fourth after picking up his fifth foul early in the period. The Wolves trimmed a 20-point lead to 8 with less than 6 minutes to play before JJ and Jameer stroked back-to-back threes to help the Magic fend off KLove and Co. Minnesota (13-16) played without Luke Ridnour, so Martell Webster and his hair started in his place. Meanwhile, here’s your daily Rubio highlight sample package: nifty dish, nifty finish.

Milwaukee came in to this game with a 2-0 record against the Heat this season, and after one quarter, it looked like the Bucks might be on their way to three in a row against Miami, leading 30-27. But LeBron James awoke over the next three quarters and helped the Heat jump out to a 24-point lead and cruising in the second half to get revenge on the Bucks, finally. James finished with 35 points on 16-21 field goal shooting—tying his career-best field goal percentage in a game (minimum 20 shots). LeBron clearly remembered the last time these teams played, when Milwaukee came back from down 18 to beat Miami. In that game, they used a big third quarter to get back on top—this time, it was LBJ who dominated the third, scoring 16 points and helping Miami start the second half on a 14-4 run. The Heat shot 53 percent from the field as a team, Dwyane Wade scored 22 points, Mario Chalmers had 13 and Chris Bosh had a quiet but all-around decent game when called upon (which wasn’t often), with 8 points on 8 shots, 7 boards and 4 dimes. Carlos Delfino was hot early for the Bucks, finishing with 24 points (5 threes), but Milwaukee shot sub-40 percent and was outrebounded 48-35. Drew Gooden had a forgettable night, with 12 points and 8 rebounds but just a 2-14 shooting night.

On paper, New Orleans had no business winning this game. And I’d also add they didn’t deserve it, given their newfound candidacy for worst NBA jersey of the season, with the two-toned “NOLA” Mardi Gras edition yucksters. It’s the Tams and the NOLAs going head-to-head right now in that department if you ask me. But Chris Kaman, who looked especially weird in last night’s unis, went all Caveman on the Jazz, with 27 points and 13 rebounds in a starting role, leading the Hornets to just their 5th win of the season, despite playing without Jarret Jack, Carl Landry, Jason Smith and Eric Gordon (duh). The final score is deceiving, since New Orleans (which snapped an 8-game slide) led by as many as 20 in the third quarter before the Jazz went on a late run to make it close, but never close enough. Utah’s road struggles continue, as the Jazz are now 3-8 away from home. 14 points was the high-water mark for Utah, getting that many from Al Jefferson (plus 12 rebounds) and Derrick Favors, and not much from anyone else.

I’m a big-time Blake Griffin fan. I mean, I think we all are. But Blake, for the sake of all things holy, make a free throw, bro. Griffin missed 5 straight freebies late in the fourth quarter and shot 2-9 from the charity stripe for the game. He scored 20 points and the Clippers were in this one until the final few seconds, but his misses from the line were painful and damning for Lob Angeles. So much so that I considered calling this morning’s Post Up by the title “Brick City.” Blake wasn’t the only one on the court, though—on the night Caron Butler got his championship ring from Dallas, he dropped 23 points, but couldn’t connect on what would have been the game-winning three-pointer from the wing with less than 5 seconds left to play, and the Clips fell to 17-9 on the year at the hands of the Mavs. Dallas rode a familiar clutch performance from Dirk Nowitzki, who morphed into unguardable mode over the last 6+ minutes, when he scored 11 of his team-high 22 points. All told, L.A. had a chance to tie or take the lead after Griffin and Chris Paul (16 points, 9 dimes) combined to steal an ill-advised inbounds pass from Jason Kidd on the game’s final possession, but Butler’s three was off the mark. Dallas is now 18-11, and faces Denver on Wednesday night.

Thank god the Bobcats don’t play on the West Coast. At least when the last game of the evening features two sub-.500 teams, it’s usually an uptempo, high-scoring affair with a sure chance of some nice highlights. In last night’s late one, the Dubs got past the Suns on the strength of 28 points and 12 rebounds from David Lee, who picked up the slack for Golden State’s struggling backcourt. Monta Ellis scored 18 points but shot just 5-20, and Stephen Curry scored only 9 points on 3-10 field goals (though he did add 7 boards and 5 dimes). Steph also had a scare when he tweaked his ankle…again. But he was back on the floor late in the game and appeared to be okay. The #FreeSteveNash movement is in full effect, as Nash racked up 14 assists but the Suns shot just 5-25 from the 3-point line and couldn’t get a single key stop (or basket, for that matter) when it mattered. The only guy balling hard for Nash these days is Machine Gortat, who delivered with 25 and 12, plus 2 blocks.

Moment of the Night: Chris Bosh is either really weird or drunk. Either way, I love it.

Dunk of the Night: More Heat.

Bonus Funny of the Night: ‘Where in the world’ did they come up with this? It’s amazing.

Tonight: 9 games on tap for Valentine’s Day viewing, including an NBATV doubleheader of Heat-Pacers and (drum roll…) Wizards-Blazers! The best of the rest around the League: Jazz-Thunder and Rockets-Grizzlies at 8, Hawks-Lakers late night and Linsanity goes international as the Knicks are in Toronto. And that’s not even counting the SLAM pick-up game at an ultra-secret location in Manhattan. Not-so-bold prediction: we’ll have plenty to talk about tomorrow.