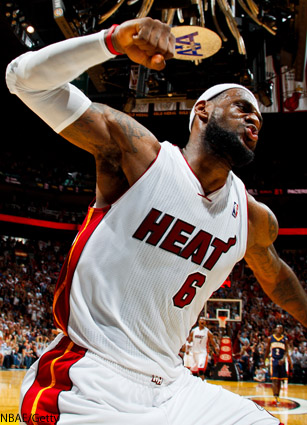 Covering and watching 10 games in five days has me wiped, and yesterday was a marathon of a day. Woke up in Jersey, road tripped out to Long Island, stormed the court after Vermont won the America East Championship, hopped on the train back to Manhattan, caught the Big East Tournament Final and then it was all NBA when I got home. Damn, that’s a lot of hoops. All that (plus a lost hour) left me with very little time to get caught up in full on all of last night’s games, so please excuse another abridged version of today’s Post Up. We’ll be back full force this week. Thank you to everyone who reads and comments for the continued support—we appreciate all of you.

The Wizards allowed LaMarcus Aldridge to do whatever he wanted against them. When it was all said and done, the All-Star had 30 points on 12-15 shooting, 10 boards, 3 assists and 0 turnovers. Jamal Crawford scored 23 and Ray Felton had 21 to help snap the Blazers’ two-game losing streak. John Wall had 25 points, 8 assists and 0 (!!) turnovers, but didn’t get much help elsewhere. Jordan Crawford and Nick Young shot a combined 7-26 from the field and 1-8 from behind the arc.

Last night’s Miami-Indy game saw 13 lead changes and 15 ties and neither team could get the momentum swing they needed to pull away. Dwyane Wade hit a 19-foot jumper with .01 seconds left in the extra session to give Miami the lead and the win down in South Beach. Wade finished with a game-high 28 points while Lebron James tallied 27 points, 8 boards and 4 assists. James was also responsible for forcing overtime after he hit a corner three with 10 seconds left to tie the game at 85. Indiana was led by Danny Granger who finished with 19 points and 7 boards while David West chipped in with a 15-10 double-double.

The backcourt duo of Rodney Stuckey and Brandon Knight combined for 39 points and 15 dimes as the Pistons made light work of the Toronto Raptors in Detroit last night. In the first quarter alone, Knight outscored the Raptors by his lonesome; he had 15 points to T.Dot’s 14. The Pistons never trailed and led by as many as 31 on their way to their third straight victory. Andrea Bargnani made his return to the lineup last night after missing 26 games with a strained calf. He finished with 8 points on 2-8 shooting.

Gerald Green had one of the best in-game dunks I have ever seen in this one. Along with that huge dunk, Green finished with 26 points off the bench, but it wasn’t enough as the Rockets had six players score in double figures to steal a victory on the road. Goran Dragic finished with 23 points and 8 assists while Kyle Lowry looked on from the bench. Luis Scola finished with 12 points and 8 rebounds and was credited with the go-ahead bucket after Gerald Green accidentally tipped the ball into his own basket.

Four of the first ten Chicago rotational players missed the game for one reason or another, but it didn’t matter. Carlos Boozer led all scorers with 27 points and Kyle Korver hit six three-pointers to finish with 26 points. DRose had 24 points and 13 dimes and the Bulls were able to overcome their injury problems thanks to their depth and the young MVP’s distribution of the ball. Paul Millsap finished with 26 and Jamaal Tinsley dropped 10 dimes off the bench.

Kevin Durant had 26, Russ Westbrook had 23 and James Harden had a career-high 32 as the Thunder rebounded from the previous night’s loss to the Cavs and beat up on the hapless Bobcats. This one was over by halftime as the Thunder mounted a 22-point lead late in the second quarter.

Adding insult to injury, the T-Wolves dropped a game to the lowly Hornets one night after losing Ricky Rubio for the season with a torn ACL. Kevin Love did his usual thing with 31 points and 16 boards but Chris Kaman battled him right back with 20 points of his own. Jarrett Jack, who has been having a good year down in ‘Nawlins (someone please get him out of there), had 17 points and 7 dimes and Greivis Vasquez chipped in with 12 off the bench. The Hornets were able to hold off Minnesota late in the game thanks to clutch free throw shooting.

Just like that, the Suns find themselves two games under .500 and right back in the thick of things out West. After trailing 46-35 midway through the second, PHX ripped off a 16-2 run that gave them a 53-51 lead and momentum at the half. The Suns have now won seven of their last nine and have been getting some great minutes from Jared Dudley. Last night, the BC alum led his team with 17 points and 7 boards. Steve Nash had 15 assists and Marcin Gortat had 15 and 9 boards. Rudy Gay had 21 points, 8 boards and 5 assists but shot just 7-20 from the field while being guarded by Grant Hill.

Steph Curry’s lingering ankle injury came back to haunt him again last night. Curry, who was making his first start since returning to the lineup after a tendon sprain in his right foot kept him sidelined, left the game with seven minutes to go in the third after he sprained his ankle. No word yet on how serious it is. The Warriors jumped all over the Mavs from the beginning; they opened up an 11-point lead in the first quarter behind David Lee’s 13 opening period points. Lee finished with 25 and 9 boards. Nate Robinson added 21 and Monta Ellis chipped in with 20 points and 8 assists. Dirk led the Mavs with 22 points but they didn’t have the legs to keep up with the youthful Warriors late in the game.