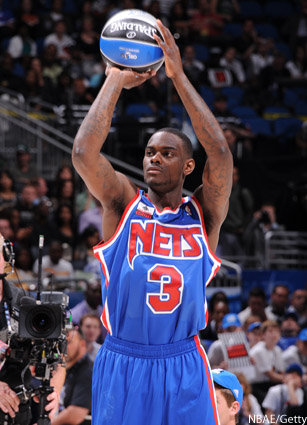 As one of only a few former New Jersey Nets contractually guaranteed to be making the move to Brooklyn with the franchise this fall, Anthony Morrow has plenty to look forward to these days. He’ll soon have himself a solid role on one of the most exciting, up-and-coming organizations in the League, and at 26, he should still have plenty of on-the-court improvement ahead of him—be it on the defensive end, where he promises to be more active next season, or on the offensive end, where he’d like to get his 3-point percentage back up to where it stood his rookie year, when he led all players with a 46.7 percent clip. (In a recent Sports Illustrated poll, Morrow’s peers voted him the No. 4 best pure shooter in the NBA.)

We rang up the sharpshooter, whose currently spending some time in his hometown of Charlotte, NC, to talk about his team’s future, his buddy Deron Williams, his offseason plans, his former (awesome) Twitter handle and much more.

SLAM: I assume you’re pretty pumped about this move.

Anthony Morrow: Oh yeah, man. I cant wait. It’s gonna be fun. Everybody’s excited. I’m just waiting to get all my Brooklyn Nets gear in the mail so I can wear it.

SLAM: You haven’t gotten a shipment yet?

SLAM: Have you seen the new arena yet?

AM: Yeah, I’ve seen it. I went by and saw it a while ago; I haven’t seen it recently. When I go back up there—I’m gonna go back up in a couple weeks to work out—I’m gonna check it out.

SLAM: What are your thoughts on the franchise’s ability to pull together a new fan base in Brooklyn? Obviously you’ll keep a few fans from New Jersey, but for the most part the team will need to bring in a whole new set of fans.

AM: I think we’re gonna have all of Brooklyn. You know, New York is New York. They’re gonna love the Knicks. But I think with us coming over to Brooklyn, we’re gonna really pull some fans onto our side. A lot of fans. I think League-wide we’re gonna get more fans as we develop as a team and get better. But I’m really excited. It’s something new, and I’m just blessed to be a part of the movement and this history being made.

SLAM: Is it weird, or uncomfortable, for you, not having any idea what next season’s Nets roster is going to look like?

AM: Not really. I’m more anxious than anything. I’m just anxious to see what everything’s gonna be like. It’s gonna be so magnified over there—everybody’s gotta be real careful with everything. That’s one of the main concerns—where you go, who you hang out with, stuff like that—but other than that, the main thing is, I’m just more anxious and excited to see what happens, and excited to get out there and play basketball in that market. See how the fans react to us, stuff like that.

SLAM: Have you had any conversations with Deron Williams about his situation? So much of the squad’s future is resting on his free agency decision over the summer.

AM: A little bit. Me and Deron, we don’t always talk about it too much. I know at the end of the day, Deron is a future Hall of Famer, and he’s gonna do what’s best for himself and his family. That said, I think he really likes Brooklyn. He loves the team, our teammates. Our team chemistry—I’ve probably never had this kind of team chemistry with a team before. We do so much stuff together. He’s gonna do what’s best for him and his family, and that’s the main thing. All of the guys respect that about him. You gotta do what makes you happy. [But] I want him back. I tell him all the time, I want him back [laughs].

SLAM: What’s your take on how Head Coach Avery Johnson has done so far?

AM: He’s been great. A real honest guy. He’s not gonna sugarcoat anything, and he’s one of those guys that you want to play well for. I knew signing with the Nets, knowing that he was coming, I wanted to play well knowing what kind of coach he was and what kind of reputation he has as a player and as a coach. A lot of guys have really had a lot of success under him and really been blessed with great contracts playing under him. He’s one of those guys that you listen to him, he knows how to coach, you play the right way and he’s gonna make sure you get to a point in your career where you really want to go.  So I’ve really bought in to his way of coaching. Off the court, he’s a person you can talk to about a lot of different things. He’s a really good man, a good coach.

SLAM: It seems like nobody came out of last season entirely healthy. How’s your body holding up?

AM: I was good. I focused a lot on my flexibility last year, and I think that was my main thing—that really helped me out a lot. I didn’t miss that many games this year; I had an ankle injury and I had to sit one game for that, and other than that, I was cool. I’m just gonna continue to work on those things—flexibility, and continuing to work on my athleticism.

SLAM: What are you working on this summer, as far as your game is concerned?

AM: I want to lead the League in 3-point percentage next year. And I want to get better in every aspect. I always want to get better at something every year. I think I got better off the ball, coming off screens, but it’s something I still gotta get better at. My post game came a long way. When I was talking to Avery after the season, he said he never knew he could post me up—he didn’t even think of it. Being able to do that now, and expanding my game that way, I think I’m just gonna continue to improve on those things offensively. Defensively, I want to average more steals. I want be more active defensively. I think that’s something that our strength-and-conditioning guy Jeremy is going to help a lot with. I want to come back, like, ‘I know I got better at this. I know I got better at that.’ I always come in in pretty good shape; I wanna come in in great shape. Those are the little goals that I have.

SLAM: Is that always how you come into the season—with very specific things you want to make sure you’ve gotten better at?

AM: Yeah, definitely. Last year, with the whole lockout, my main goal was, ‘I don’t want to be out of shape.’ And it was so hard to gauge when to work out or when not to, because you didn’t want to work out too hard, too early, and burn out, you know? So it was a lot of little stuff that a lot of people were worried about, and it ended up working out. Avery and Billy [King] both said I looked like I came back in good shape this year, so that’s never really an issue with me. But it’s something I want to continue to build on.

SLAM: On a different note, I was pretty shocked to see that you changed your Twitter handle.

SLAM: Speaking of Twitter, your bio says that you’re a fan of sitcoms. I think you might be the only NBA player to have admitted that.

AM: I love Martin. That’s my show. Right now, I like Modern Family. I like a lot of stuff people wouldn’t expect me to like. I like The Office. I love House. Law & Order, that’s like my main show. Criminal Minds. And basketball—any kind of basketball.