Report: Andrew Bogut Open to Trade from the Milwaukee Bucks 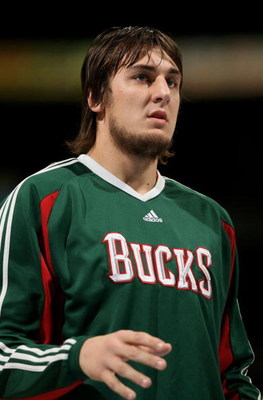 These days, it seems that no one is particularly happy in Milwaukee.

The Bucks are out of the Playoff picture, Stephen Jackson has worn out his welcome, and Brandon Jennings is already looking down the road at his future options.

I suppose it only makes sense that the injured Andrew Bogut — the 27-year old center fractured his left ankle in late January — would be the latest Milwaukee Buck reportedly seeking a way out of town.

Bogut isn’t expected to return to action for several weeks, but that hasn’t prevented several teams from showing interest in him. He’s coveted by these teams, who fully realize there is a dearth of quality big men in the league and that the upcoming June NBA draft is also devoid of blue-chip centers. Bogut, the No. 1 overall pick in the 2005 NBA draft, has never publicly expressed any displeasure playing in small-market Milwaukee. But there are whispers Bogut wouldn’t mind a change of scenery, having become frustrated about the team’s lack of progress and his strained relationship with Bucks head coach Scott Skiles.

Unlike his teammate Stephen Jackson, who hasn’t hidden his displeasure with Skiles — Jackson recently told Rod Burks of Channel 4 in Milwaukee that “We don’t have no relationship like I’ve had with other coaches and I don’t expect to have one.” — Bogut has had his issues with Skiles as well. Some Bucks claim the Bogut-Skiles relationship was especially acrimonious last season when they seldom communicated with each other. Besides his noticeable talents as a rebounder and shot-blocker, Bogut also has a favorable contract. After this season, he has two years remaining: $13.1 million for the 2012-13 season and $14.2 million for the 2013-14 season.

According to the report above, the Bucks have fielded calls from several teams around the League about Andrew Bogut’s availability, and there’s talk of them exploring the possibility of packaging the big man in a trade with the unhappy Stephen Jackson.

In order to salvage whatever may be left of their season, Milwaukee probably needs to make a move by next Thursday’s Trade Deadline. What isn’t clear at the moment, is just how big a change the franchise intends to make.