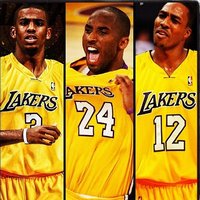 If the latest reports are to believed, unless the player’s name starts with Kobe and ends with Bryant, everyone on the Los Angeles Lakers’ roster is available for trading purposes, as the Lakers reportedly chase after both Dwight Howard and Chris Paul.

The idea for the blockbuster move, which would obviously shake up the NBA dramatically, hasn’t only occurred to the Lakers.

According to ESPN, the Clippers are thinking of pulling off a similar move:

Hoping to pull off a pair of blockbuster moves that would rock the NBA, the Lakers are willing to trade anyone on their roster outside of Kobe Bryant to bring Howard and Paul to Los Angeles, two sources said. Whether the Lakers are able to make it happen remains to be seen, but with stars Pau Gasol, Andrew Bynum and Lamar Odom on the roster, they have the talent and the financial capacity to make the trades work. The Lakers have had cursory discussions with New Orleans about Paul within the past few days. It is not clear whether they have spoken with Orlando.

Sources say the Clippers also have intentions to go after both Howard and Paul. And like the Lakers, the Clippers are positioned — financially and talent-wise to make such a move. Unlike the Lakers, the Clippers would not have to make two trades. They could use their wealth of young talent to trade for either Paul or Howard and then sign the other as a free agent next summer when they’ll have enough cap room to offer a maximum-salary contract. The one player the Clippers will not offer in a trade is Blake Griffin. “The Lakers have company (in going after Howard and Paul),” another Western Conference official said. “The Clippers are doing the same thing.”

For the time being, these are just “sources” planting scenarios and trade possibilities in the media, so there’s probably no reason to get too excited about any of this.

Dwight Howard and Chris Paul’s names will appear in new, increasingly crazier trade rumors every single day until they both move on from their current teams. I hope you’ve prepared yourselves adequately for that.