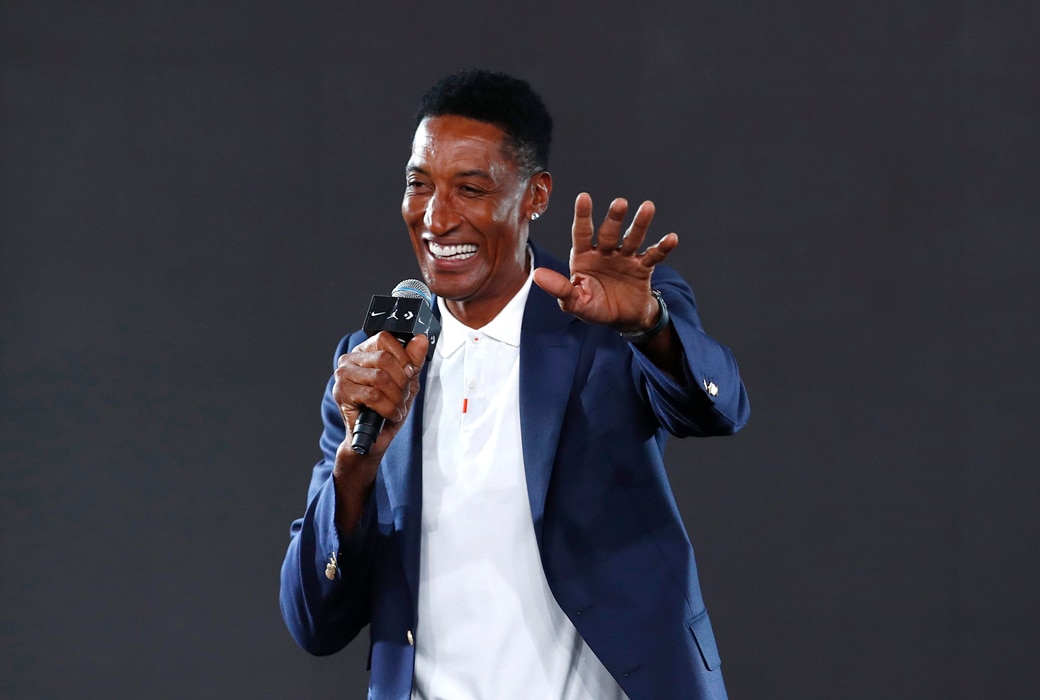 Last week, Scottie Pippen made a guest appearance at the unveiling of the 2019 FIBA World Cup apparel and footwear at the Phoenix Center in Beijing, China. Ahead of the upcoming tournament beginning Aug. 31, the Hall of Famer talked to a crowd of local and international media about his first time visiting the Greater China area in the ‘90s and the growth he sees almost three decades later.

SLAM caught up with Pippen to talk hoops in China, signature sneakers, the Lakers-Clippers rivalry and which team had the best offseason.

SLAM: The game continues to grow, especially here in China. What do you admire most about the fans?

Scottie Pippen: It’s a lot of them. [Laughs] The fact that they’ve continued to be the frontrunners in terms of growing our game and there’s so many people here. When they take an interest in the game, then you can really feel the impact of the growth.

SLAM: You mentioned earlier that you first came here in ’92. Over the course of nearly three decades, what’s it been like to see basketball in China evolve?

SP: It’s great. You’ve seen a lot of effort that’s been put into the game whether it’s through outdoor basketball courts or the impact that Nike has come up with to implement different programs. Just the grassroots of the game, the NBA spending more time in China to educate them and align a lot players to come over here and do camps like Basketball Without Borders and things of that nature to grow the game and get excited about the game.

SLAM: Your sneakers are popular over here. I just saw someone in the hallway rocking the Air More Uptempos. Is it still surreal to you?

SP: No, not really, because I think we put basketball on the map in terms of China. Fans know the Bulls from the early ‘90s. That’s when basketball was introduced to them from the late ‘80s… ’87 is the year that I was drafted [and] we signed an agreement with China basketball, so just people knowing my career and being able to follow it still resonates to today because of winning.

SLAM: Giannis Antetokounmpo become the first international player to get a signature sneaker. What are your thoughts on that?

SP: I think it’s great. He’s definitely earned it and he’s a player that has worked very hard. Being the MVP of the League this year is something that he earned and is rewarding for him. The sky’s the limit for him and he’s opening doors up for other players in that nature as well. Him being an international player, this is something that he’s worked hard for, probably dreamed about having one day and it’s finally come to fruition for him.

SLAM: The Nike Basketball signature line extends decades. Are there any other sigs you’re a fan of?

SP: I’m a fan of my own signature shoe—that’s about it. In today’s game, the signature shoe has grown a lot. Players are able to put a little bit more impact on it because of social media, but I’m really not a fan of anyone in particular. I’m just a lifestyle-kind-of-shoe guy, not basketball shoes anymore.

SLAM: What about the technology and seeing it grow over the years?

SP: It’s amazing. The shoe says a lot in today’s game and they’re something that’s gained a lot of attention since the early ‘90s. Guys are putting a lot more emphasis on making sure that their shoes have a little bit more pop and gets a lot more attention. From a technology standpoint, that’s the most important of the signature shoe. It has to be something that works well for the athlete and something that is comfortable for them. Ultimately, he’s the one that has to wear them and tell the story at the end of the day about them. That’s important and your play. If your play can speak for you, then the shoe is going to do well.

SLAM: It’s been a crazy free agency. What were some of your thoughts on the signings?

SP: I thought it was great. I was happy to see some of the talent get spread out a little bit. The Clippers and the Lakers feel like they were the big winners in the free agent market—maybe not the Lakers, they didn’t really get a free agent, they just got a trade. I think they both feel like they were big winners this summer. Still, you have to go on the court and make it real.

I still think that Houston is going to be one of the teams that’s going to have the upper edge because they’ve been together with the one addition of bringing in [Russell] Westbrook, who can propel them to the top or to the bottom. It’s going to be an interesting season for not only the Houston Rockets, but the Lakers and Clippers. It’s going to be an interesting season for some teams on the East like Brooklyn. What can Kyrie [Irving] do? He’s going to have a year to go in and establish himself. More than any player in the game, there’s going to be a lot of pressure on him because people are used to seeing him have success and be amongst some of the top teams in the League. It’s not going to be that easy now and it wasn’t easy for him last year [in Boston]. This is—I don’t want to say it’s going to be a make-or-break situation for him—but I think a lot of eyes are on him to see if he has that ability to win again.

SLAM: So who’s the better team: Clippers or Lakers?

SP: I would probably say the Clippers just because of where they were last year and the players that they have. They already have the confidence and feel like last year they dominated the Lakers. Now, you give them the Finals MVP [Kawhi Leonard] and one of the top defenders in the game in Paul George. That sends their confidence up through the roof. With the Lakers, I don’t think a guy going into his 17th season can really carry a team the way he needs to carry [it].

… I think LeBron will be competitive. Having Anthony Davis out there is going to give him a bit of an edge. I think they’re going to be a lot more in terms of when they face the Clippers because they have too many guys they can throw at LeBron. They already have thrown [Patrick] Beverly at him, so now you got Kawhi to throw at him [and] Paul George to throw at him. Anthony Davis is going to be a tough matchup night in and night out, but he’s only one player. LeBron James is not going to be a tough matchup. He’s going into his 17th year in the League. You’re talking about Kawhi who’s still in his 20s [and] Paul George is probably still in his 20s. It’s a changing of the guard and they’re probably going to have the pass the torch over and let the Clippers be the best team in Los Angeles.

SLAM: Of all the signings, which one surprised you the most?

SP: Who I think won big? Kawhi, the Clippers [and] Paul George. Lakers did good, but I would give the edge to the Clippers.