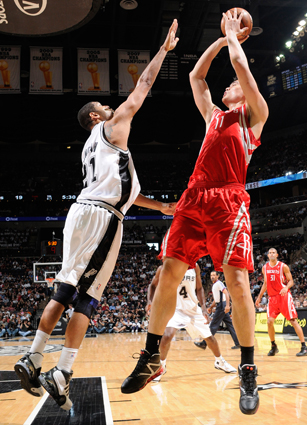 Again, I worked double-duty yesterday, Raptors/Clippers game 2pm-7pm (and I was LATE, because I couldn’t leave my place until the Cuse game was over), and then had to run straight to the office to work a 7pm-2am shift and then come home, transcribe and thennnn Post Up. And try to catch up on the night of NBA action to write this sucker.

It’s going to be one of those days. Sorry! Here’s what I’ve got (Besides Jonny Flynn’s windmill that didn’t count last night. You all see that?!).

Gotta give you the heads up on the content I’ll be posting on my Court Surfing blog over at thescore.com this week. I happened to have a few fun exchanges with the one and only Raja Bell on Friday night and let me tell you all again: He is THAT guy. I know I say a lot of nba guys are good with the media (and many are), but Mr. Bell, is something. He will talk to you about anything, laugh with you while you rip him for wearing full-length spandex under his dress pants (they served a real purpose), and he’ll even answer your questions in full while the Bobcats PR is rushing you along, counting down the time in minutes, until the bus is taking off.

I was able to set the scene and ask him to take me back to that day, Staples Center, 2001 NBA Finals Game One. That layup at the end of the game. I think I surprised him with the flashback, but man it was cool telling him that was the moment that Raja Bell became a household name for me. It was even more fun to remind him that I grew up a Kobe fan.

So, I’ve got that, plus a TON of stuff with Raymond Felton, DJ Augustin and Gerald Wallace coming today/tomorrow on the site. BETCATS, you will be proud (and pleased), with the stuff I got on your boys.

Oh yeah… I also sat courtside for that game for the first time ever and went home completely unable to sleep after I had the privilege of watching and listening (!), to Larry Brown coach his team in timeouts. Huge thanks go out to the PR team at the ACC for slipping me in courtside for a night that won’t soon be forgotten.

The Raptors took down the Clippers 100-76 yesterday. No, I’m not joking. It was also Chris Bosh’s 25th birthday. And the Raptors 25th victory of the season. Yeesh, it’s been bad for Toronto fans this year. Sometimes I forget just how bad. Yesterday reminded me.

I spoke with Mike Taylor for a long while after the game and will have that interview up later this week on the Court Surfing blog as well. He gave me some crazy info about his dunking history, as well as some stuff on his height that will definitely get you attention.

Okay, enough about that. Just wanted to let you all know, I’m a working girl! The only explanation for slipping on my NBA-watching.

Spencer Hawes with the shocker line of the night: 17 points, 10 rebounds and nine assists. Kinda opened my eyes when I was looking at that boxscore.

Speaking of weird lines, Friday night when the Bobcats were in town, Boris Diaw scored 30 points and attempted zero free throws. How weird is that? The majority of his points came in the paint, yet he attempts zero free throws. Says something about Diaw or something else about the Raptors defense. Either way, haven’t seen that in awhile.

So, the Rockets are now in second place in the Western Conference playoff race, moving a half-game ahead of the Spurs in the standings with their win over San Antonio yesterday afternoon.

LeBron James is pretty good and so are his Cavs. With a victory over the Nets (96-88), the Cavaliers tied the franchise record for wins and they’ve got that Central Division banner hanging pretty from the rafters of the Quicken Loans Arena as well. It’s been a good year for Cleveland Cavs fans.

Has everyone seen the pregame ritual of the Cavs now? The posing by the Cavs and Bron the “photographer” taking their photo? I think it’s pretty funny. Apparently Shaq thought it was weak, so he set up the Suns to be his bowling pins… And, they actually fall on comand. Pretty wild, this nba world.

James had 30/11/8 last night while Zydrunas Ilgauskas had 18 points and 4 blocked shots and Anderson Varejao added 16 points and 11 rebounds. The Nets had 25/9/5 from Vince Carter, 19 from Keyon Dooling and 16 from Brook Lopez. Without Devin Harris they never really threaten the Cavs in this one.

39 points from Dwyane Wade helped give the Heat a 101-96 victory over the Pistons yesterday, but more than his points, it was the two blocks in the final 22 seconds of the game that really sealed the victory for the Heat. In the game, Wade finished with 4 blocked shots. Udonis Haslem scored 16 points, including six in the final seconds to hold off the Pistons. Jamario Moon scored 17 points and Jermaine O’Neal had 14. Antonio McDyess had 16 points to go with 12 rebounds for Detroit as Rodney Stuckey scored 24 points and Tayshaun Prince added 14 in the loss.

Houston won a close one against San Antonio, coming away with the 87-85 victory thanks to big nights from Ron Artest, who finished with 24 points and Luis Scola, who finished with 19 points and 17 rebounds. I didn’t see any of this one, but was peeping the boxscore on Yahoo!Sports whle the Raptors killed the Clippers, then walked into the media room for the final possession. Rather than rush to hear Jay Triano and Mike Dunleavy speak postgame, the various media members gathered around the TV that was showing the game to see how it would unfold. I personally, thought SA had it. I figured Tony Parker would drive and then dish to one of his shooters. Instead, he drove, appeared to get stuck and perhaps fouled by Kyle Lowry and then tossed the ball up (maybe looking for the foul call), and got nothing. A free throw from Houston, a missed three at the buzzer from Matt Bonner, and this one went to Houston. Parker finished with 22 and 12 on the night, Tim Duncan scored 23 points and Ime Udoka added 16 off of the bench.

Oklahoma City was up huge on Minnesota, then allowed them to come roaring back in the fourth, outscoring them 37-13 in the fourth quarter to give them a scare before they were able to snuff out the TWolves for good, 97-90. The win avenged a 42-point loss to Minnesota earlier this year. Kevin Durant led the way with 30 points, 10 rebounds and five assists while Jeff Green scored 17 points and Russell Westbrook had seven points, eight rebounds and 10 assists. The Wolves were led by Craig Smith’s 19 points and 10 rebounds off of the bench while Rodney Carney scored 15 and Bobby Brown added 12.

Chris Paul led the Hornets to a 99-89 victory over the Golden State Warriors yesterday with his line of 27 points, eight rebounds and eight assists. David West scored 23, Hilton Armstrong scored 14 points to go with 11 rebounds and Rasual Butler added 13. The Warriors were led by Stephen Jackson’s 22 points, 10 rebounds and five assists while Kelenna Azubuike added 16 and Monta Ellis added 12.

The Sixers took down the Kings 112-100 last night and I definitely didn’t even catch a highlight of this one. Andre Igoudala had 27 points for Philly as Thaddeus Young scored 22 and Louis Williams added 18 off of the bench. Spencer Hawes had 17 points, 10 rebounds and nine assists in the surprise line of the night for the Kings. Francisco Garcia scored 24 points and Jason Thompson added 12 points and 13 rebounds in the loss.