On The Rise: Pascal Siakam Cannot Be Slowed Down 💨

Guarding Pascal Siakam’s spin move is like being on a roller coaster. As you’re hoping to prepare for the fall, trying to brace yourself for the drop, it happens all at once. Siakam’s spin has moved to the top line on his scouting report this year. Opposing players know it’s coming, but that doesn’t matter. By the time the defender recognizes it’s happening, Siakam is already gone.

“He’s going to burst out of there with all the speed he’s got in the world, which is what we want,” Raptors head coach Nick Nurse says. Just when it appears that Siakam is operating without control, the ball sails through the basket, he finds a cutting teammate, or dishes off at the last second to someone waiting in the corner. “It’s kind of like driving,” Nurse continues. “When you’re out in the middle of nowhere you can put your foot down a little bit and when you’re in town you have to start to navigate a little more carefully.” 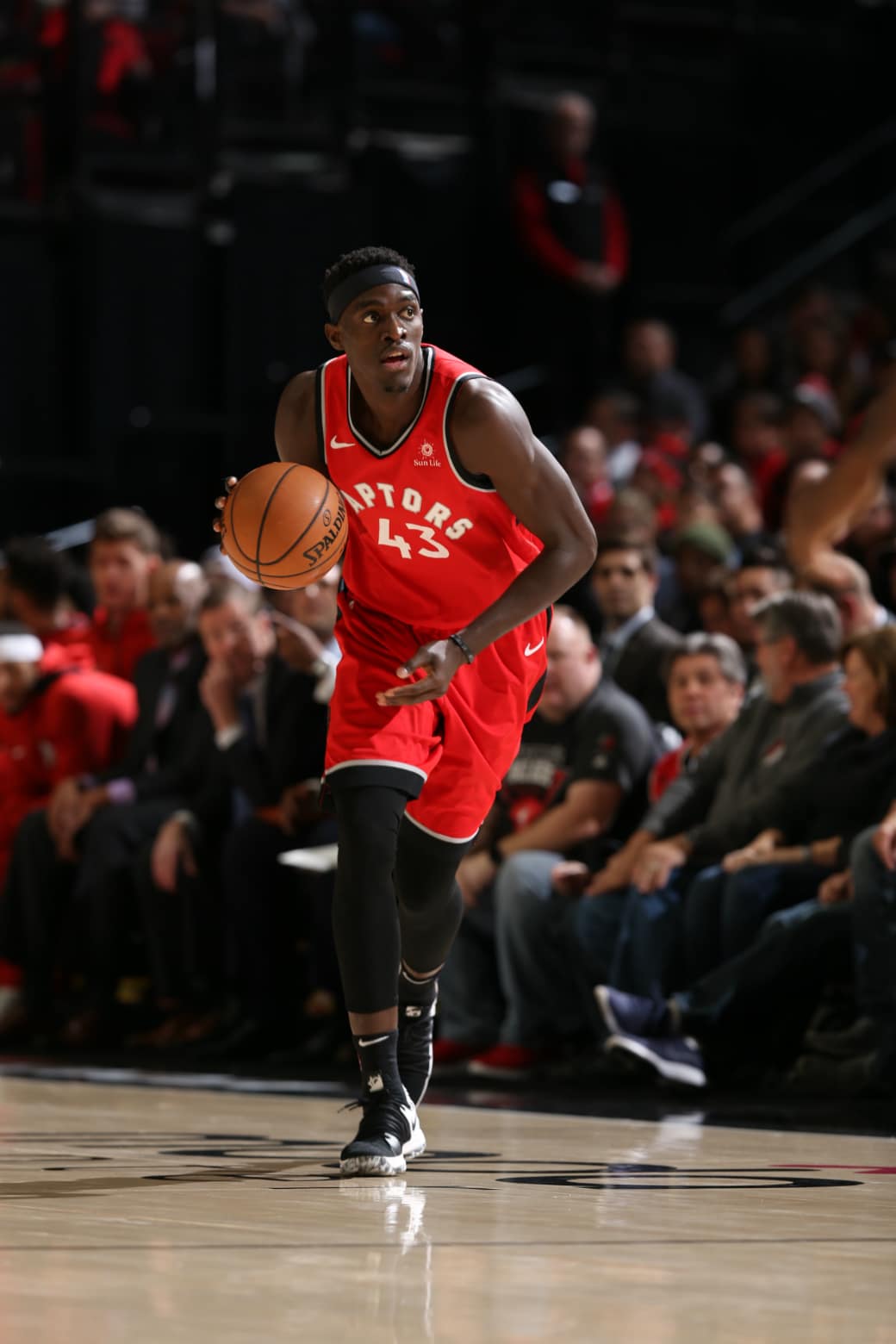 The 24-year-old Siakam has gone from relative NBA obscurity to frontrunner for the League’s Most Improved Player award. He’s come a long way from growing up in Douala, Cameroon to attending Luc Mbah a Moute’s baseball camp and a Basketball Without Borders camp in Johannesburg, South Africa, to moving to the United States to finish high school at God’s Academy in Texas.

Toronto’s recent game against the Philadelphia 76ers was part of Raptors President Masai Ujiri’s annual Giants of Africa celebration to honor the life of Nelson Mandela. Prior to tip-off, Siakam reflected on his own basketball start and what the annual event meant to him personally. “I remember I went to Mandela’s house when I was a kid with my family,” Siakam said. “We all had a trip to South Africa and we went there. The job that Masai has been doing, being a leader for African kids, trying to spread the game throughout all of Africa, it’s great.”

Having a son make it to the NBA was a dream of Siakam’s father, Tchamo. In 2014, with Siakam at New Mexico State University, Tchamo died in a car accident. Pascal was unable to return to Cameroon for his funeral, because an issue with his visa meant if he left the country he might not be able to return to school. Today, Siakam’s brothers are often present in Toronto. His social media posts mention his father frequently. He wears a photo of his parents in a pendant around his neck, keeping them close to his heart. Though his three older brothers all played and loved basketball, it wasn’t until Siakam made the move to the U.S. that he started to see how the game could shape his future.

“For me it was the [basketball] camps,” Siakam says. “[Those] are kind of my first memories. Basketball Without Borders, I think that was how everything started. Me opening up to the game and just falling in love with the game and getting a passion for it. Before that, I played sometimes, but it wasn’t like I thought I would play basketball.” 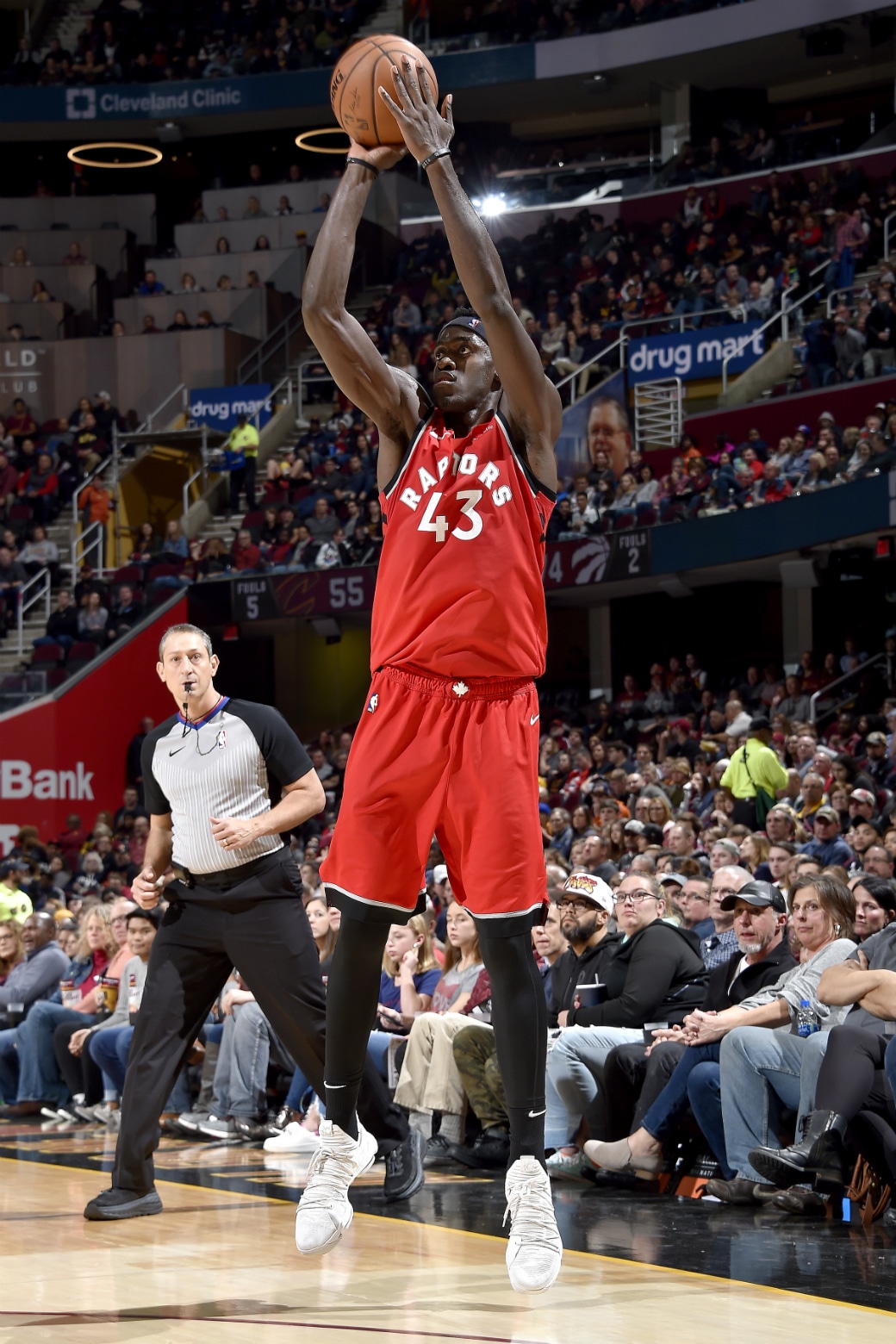 Siakam spent three years at New Mexico State. After redshirting his first season due to injury, he was named the WAC Freshman of the Year the following season. He averaged 20.2 points, 11.6 rebounds and 2.2 blocks during 2015-16, and was named unanimous WAC Player of the Year. At the end of the season he declared for the draft and his NBA story began two months later when the Toronto Raptors selected him with the 27th overall pick in 2016.

His rookie year was spent in and out of the lineup, with various stints playing for Toronto’s G-League team, where he was named MVP in the championship game. In his sophomore season, Siakam recorded five starts, averaging 7.3 points, 4.5 rebounds and 2.0 assists in 20.7 minutes per game. Though he was on a team that finished with 59 regular season victories, he desperately wanted to prove he could make a bigger impact.

Cut to the offseason. With countless NBA All-Stars flocking to Los Angeles to train, it was Siakam’s name that kept coming up after scrimmages and workouts.

“L.A. was 6 o’clock in the morning, get up, get a nice workout in,” Siakam says. “After that, you lift. Then come back in the afternoon and play games, open runs.” He downplays the number of free throws and three-pointers and shots taken daily over the summer, just as he laughs it off when a reporter notifies him of his three-point percentage for the month of November after a recent game. Siakam is averaging 14.4 points, 6.2 rebounds, 2.8 assists and 1.1 steals in 30 minutes a night—certainly the work done during those early morning and late night solo gym sessions has paid off, but perhaps most important for Siakam is what he realized during those scrimmages against the NBA’s best.

“I think one problem I struggled with was feeling like I belonged,” Siakam says. “I was hesitant doing things and I think when you put the work in and you see the results it’s hard not to believe in that. [It’s hard] not to have confidence. I’m really confident in my work and just like that, everything I do, I know it’s going to pay off.” Going up against NBA superstars like Russell Westbrook, Kevin Durant and James Harden and holding your own? It would be impossible not to have a confidence boost after spending the summer hearing the NBA’s best praise your progress.

“The biggest thing is confidence,” Raptors teammate C.J. Miles says. “He had a skill set, but it was just about being aggressive and believing in it. It’s allowed him to open himself up even more. Because he’s so aggressive, the spin move came. We always knew he could pass and handle the ball for his size, but I think the aggressiveness has really opened the floor for himself and for the people with him.”

Kyle Lowry has spent the past two seasons telling anyone who would listen that Siakam is the fastest sprinter in the League. As a point guard always looking for the quickest, most efficient way to put two points on the board, tossing the outlet pass to Siakam has become one of Lowry’s favorite plays. “To be able to continue to do that every single night is the thing I love about him,” Lowry says. “He still continues to do the thing that he’s great at [and] he just got better overall.”

Though his point guard loves finding him for the easy score, and viewers tuning in to Raptors games love that spin move, Siakam is most proud of his improvements as a passer. Finding himself with the ball in his hands and the opportunity to make the correct read and play for someone else means everything for a player whose scouting report used to be defined by his energy and athleticism.

“I think the most important thing for me right now is just being able to be a playmaker,” Siakam says. “It’s kind of like a stigma for African kids to come in [to the NBA] and just be bigs and run the floor and dunk and play defense. For me, to be able to kind of like change that and have kids think that they can do the things that guards can do, and do different things on the floor, I think that’s the thing I’m most proud of and I really work on.” 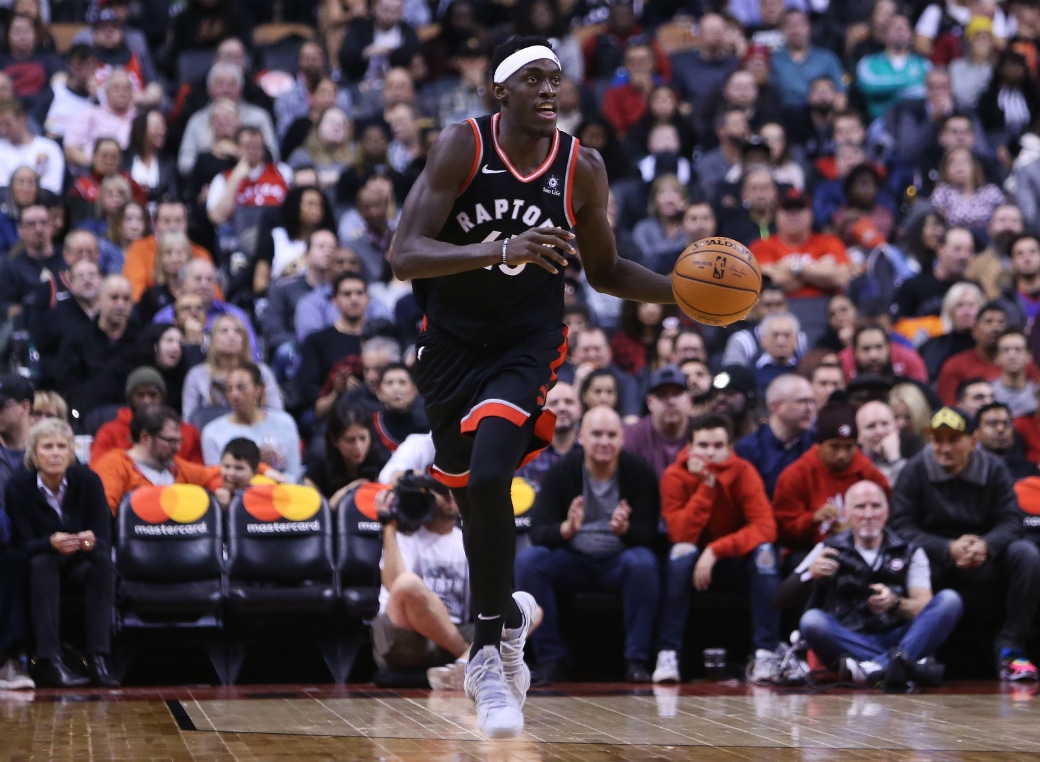 It seems Siakam sets a new career high each week. He has already nabbed his first Eastern Conference Player of the Week award, and is at the top of the NBA’s overall plus-minus list. The Raptors are an NBA-best 25-10, and each of those victories has Siakam’s fingerprints all over it. “I think Pascal is unbelievable overall,” Lowry says. “His overall talent is on display. It’s a long year and he continues to get better.”

Away from the floor, Siakam keep things fairly low-key. Video games feature prominently on the schedule when he isn’t in the gym—FIFA on heavy rotation. A self-described “weird kid,” Siakam says he’s a homebody who spends most of his time hanging out with his family. At a recent appearance for Right to Play Canada, a global organization that teaches children in need, Siakam surprised a group of outstanding students for an afternoon of activity. Like the rest of his public appearances, a scan through event photos shows the 6-foot-9, 230-pound professional athlete smiling even more than the kids getting surprised.

In the locker room and around his teammates, Siakam is known most often as “Spicy.” What does the nickname mean? Exactly what it says, according to Miles. “Caliente,” Miles says. “He’s spicy. That’s how he got his name. He’s like that all the time. Always smiling, always laughing. He works hard the same way he plays hard. There isn’t a better guy that should be getting what he’s getting right now. He deserves every ounce of praise he’s getting.”

Like Lowry, Miles doesn’t see a limit to Siakam’s upside. Armed with confidence and playing time, the only thing standing between Siakam and his full potential is experience. “The more and more you see different things and situations, the more you believe you can beat it,” Miles says. “The more and more he sees different defenses, it’s like, Oh I know what this is, I know what they’re trying to do. That’s where he’s at now. It’s just about playing and playing.”

Despite the influx of media attention and praise he has received this season, Siakam remains focused on improvement. Talk of NBA awards and All-Star nods do little to satiate Siakam’s hunger for sustained success. “A next step for me: Learning, not just going out there and having high energy,” Siakam says. “Thinking the game more. Learning more.” 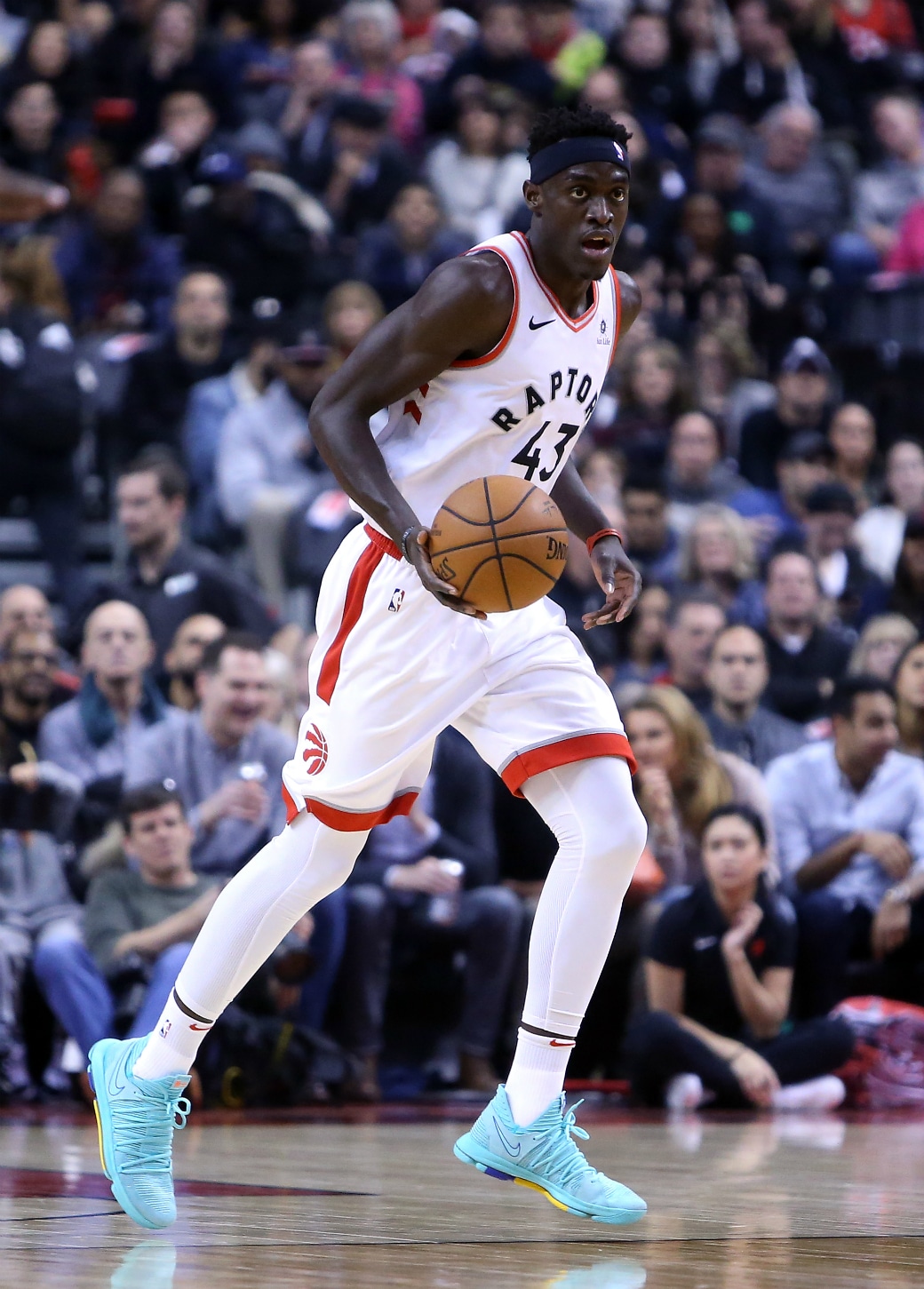 Siakam has been arguably the most enjoyable part of Toronto’s first half of the season. He has certainly been one of the most important pieces. As he continues the ascent that’s really just beginning, Siakam already knows what he wants the narrative of his story to be.

On The Rise: Landry Shamet Has Always Been Overlooked. Not Anymore.