The Raptors Are the Best Sneaker Team in the NBA

With the addition of sneaker MVP PJ Tucker, the Toronto Raptors are now undeniably the hottest team in the NBA when it comes to on-court kicks. 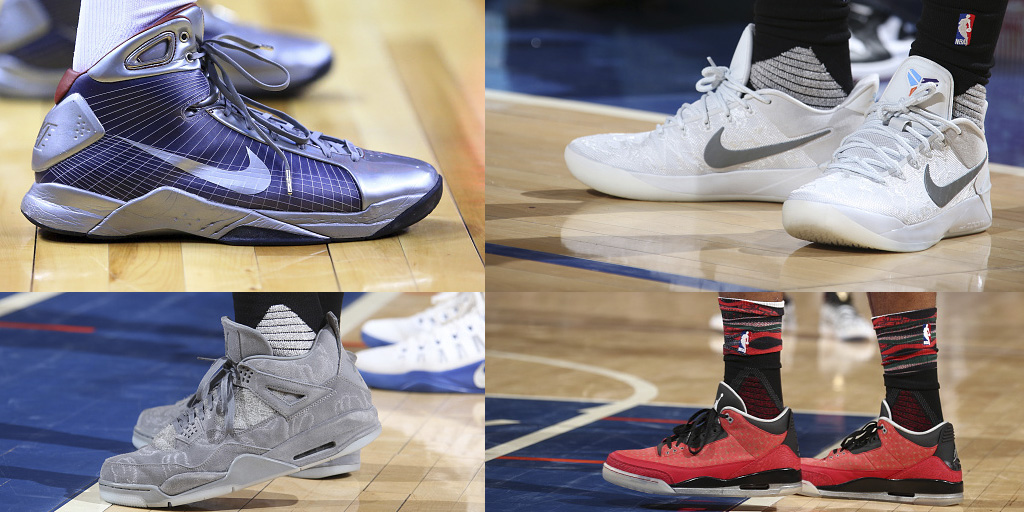 It’s 10:45 on an early April morning in New York City. The sun’s finally shining after a week of rain and the wind is keeping things cool. The Raptors are at Madison Square Garden, looking to secure their second consecutive 50-win season.

PJ Tucker strolls down a back hallway inside the Garden, decked out. He’s wearing a designer windbreaker, sunglasses, skinny jeans and the “Atmos” Nike Air Max 1 with no socks.

In the locker room, he pulls out a pair of “Red October” Nike Air Yeezy 2s. He reveals a red pair of the Nike Kobe A.D. in his stash, too. Then the NBA’s sneaker king starts to unlace the KAWS Air Jordan IVs. Raptors equipment manager Paul Elliott, who’s balancing one leg on a scooter after Achilles surgery, looks on with a huge smile.

As if that wasn’t enough heat, the rest of the Raptors locker room is full of the latest from the Swoosh, the Three Stripes and Under Armour. Delon Wright sits next to Tucker in the “Red Hot Santa” UA Curry 3. Kyle Lowry’s rocking a clean cool grey adidas Crazy Explosive Low PE. Cory Joseph has an all-black pair of Nike Kyrie 2s. DeMar DeRozan slips into his Kobe A.D. PEs—his special “Compton” colorway has a rendering of the street he grew up on featured in the sockliner.

“I don’t know if it’s a competition,” says Norm Powell, with a crispy red pair of the latest Kobe model on his feet, about the Raptors being the NBA’s best sneaker team. “I think, especially me, I try to keep up with Tuck and Deebo. The Kobes, they’re always coming out with something new I haven’t seen. I tried to beat DeMar out a little bit with my custom shoes, but he has so many different colorways. It’s hard to keep up.”

Yeah, it is. No other team in the League has the sneakers to keep up with Toronto. No other team walks around with the quiet confidence of the Dino squad. With all the silhouettes around the team, they put on a fashion show every game.

DeRozan and Lowry are top tier members of Nike and adidas, respectively. Young fellas like Wright, Powell and Joseph make it a point to gear up in neck-breaking colorways each night. And PJ Tucker’s the League’s reigning sneaker king.

After the Raptors pick up an easy win over the Knicks, Tucker sits at his locker, checking his phone. Norm Powell, half joking, half not, yells over to Tucker, asking for his KAWS IVs.

“Ain’t that right, PJ? You gonna gimme those kicks?”

Tucker, the king, doesn’t even look up. Heavy is the head that wears the (sneaker) crown.

Scroll the gallery above to see the Raptors’ best sneakers. Photos courtesy of Getty.