With Robert Covington's game-winner, the Sixers have won five straight games at home and eight of their last ten games for the first time since 2012. 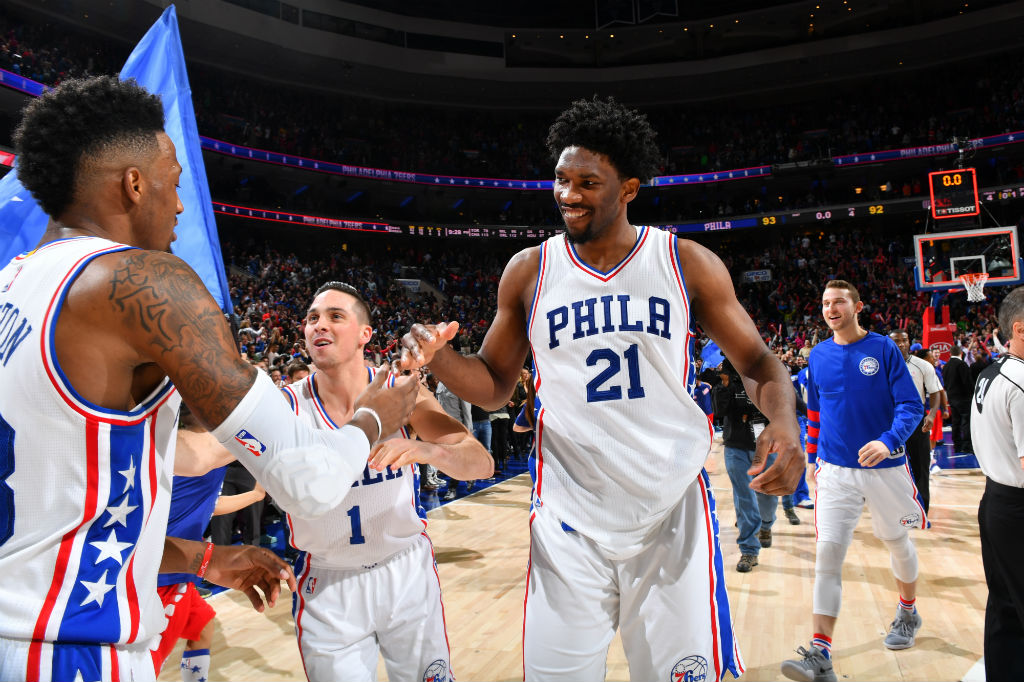 Before he went down with a bruised left knee in the second half, Joel Embiid scored 18 points, grabbed 10 rebounds, dished out 5 assists and blocked 4 shots. He sparked the Sixers’ comeback from a 14-point deficit. All of a sudden, Philly was down by one point with 38 seconds to play thanks to a three-pointer from Robert Covington.

After Damian Lillard split a pair of free throws, the Sixers ran down the court without a timeout and Covington hit another three-ball, giving him 22 points for the game. The Blazers went to Mason Plumlee to try to win it, but they came up short.

The Sixers have now won eight of their last ten games, the first time that’s happened since 2012. They’ve won five straight at home and have made three go-ahead shots in the final five seconds of three different games this year, the most in the League. Things are looking up in Philly these days.

No timeout, no problem. Robert Covington drains the game-winner for Philly. (via @BenGolliver) pic.twitter.com/IDWlLULyQF

Kemba Walker’s bid to make the All-Star Game has never been stronger. Kemba went off for 32 points, on 11-16 shooting and 6-9 from distance, and 8 assists against the East’s second best team. He led the Hornets to a dominant win, leading by as much as 37 in the second half. Charlotte clamped down on defense, holding Toronto to 33% shooting and just 7 made three-pointers. They owned the boards, too, outrebounding the Raptors 51-33. Walker’s now scored at least 30 points six times this season.

It’s been two weeks since the Magic were home. They went 1-5 on their road trip. Looks like they just missed their own beds. They quickly rebounded from a slow start to lead from the first quarter until the end of the game, by as much as 19 at one point. They won the rebound, assist, steal and block categories and had seven players score at least 10 points, led by Elfrid Payton’s 20 points and 6 assists.

28 points and 9 rebounds for Marc Gasol, 20 and 10 for Zach Randolph and four other Grizzlies scored in double-digits as Memphis cruised in the second half. GNG connected on 11 three-pointers, with three coming from Gasol and two off of Randolph’s fingertips. The Grizzlies had 58 rebounds, while the Kings had 35. DeMarcus Cousins had 19 and 10 in the loss.

Wait a second, when did @MacBo50 become an automatic three-point shooter? (via @memgrizz) pic.twitter.com/M5gw21nzpk

Look at the Nets! The last time time the Nets scored at least 143 points in a regulation game was 1982. They exploded for their first win of 2017 with a dramatic offensive showing. 15-30 from distance, 32-25 from the foul line, 57% shooting for the game. Eight players scored in double-figures and every Net that got in the game managed to register at least 6 points. All but two Nets had at least 1 assist. The bench scored 73 points. The 143 is the second most scored in the League this season, trailing only the Warriors’ 149 point outburst from November.

The Dubs locked up on defense and shared the ball on offense to get a convincing win in Houston. The Rockets shot 7-35 from outside the arc. It’s only the fourth time the Rockets have been limited to fewer than 10 threes. Golden State zeroed in on James Harden. The Beard shot 6-13 for 17 points, 7 rebounds, 11 assists and 7 turnovers. Kevin Durant had 32 points and 7 assists for the Warriors.

Despite a valiant late effort from their bench, the Bulls were terrible in Atlanta. The Hawks jumped out to a 35-13 lead after the first quarter and eventually built a 34-point lead. Atlanta shot 48% from the floor and forced 24 turnovers. Dennis Schroder had 25 in the win.

Gordon Hayward and Rudy Gobert stepped up huge for the Jazz. Gobert had the League’s first game of at least 25 points and 25 rebounds for this season. The Stifle Tower had 27 points and 25 boards, both career-highs. Hayward led the way in the clutch, finishing with 26 points, 7 rebounds and 4 assists.

The Lakers snapped their five-game losing game in style. Lou Williams dropped 27, Nick Young made 5 three-pointers, Julius Randle had 16 and Brandon Ingram added 15. LA outscored Indy 35-22 in the third and didn’t look back after that.