For the second straight season, the Lakers dominate the Warriors in L.A. Plus, Dame, Devin and DeMar all have big scoring games. 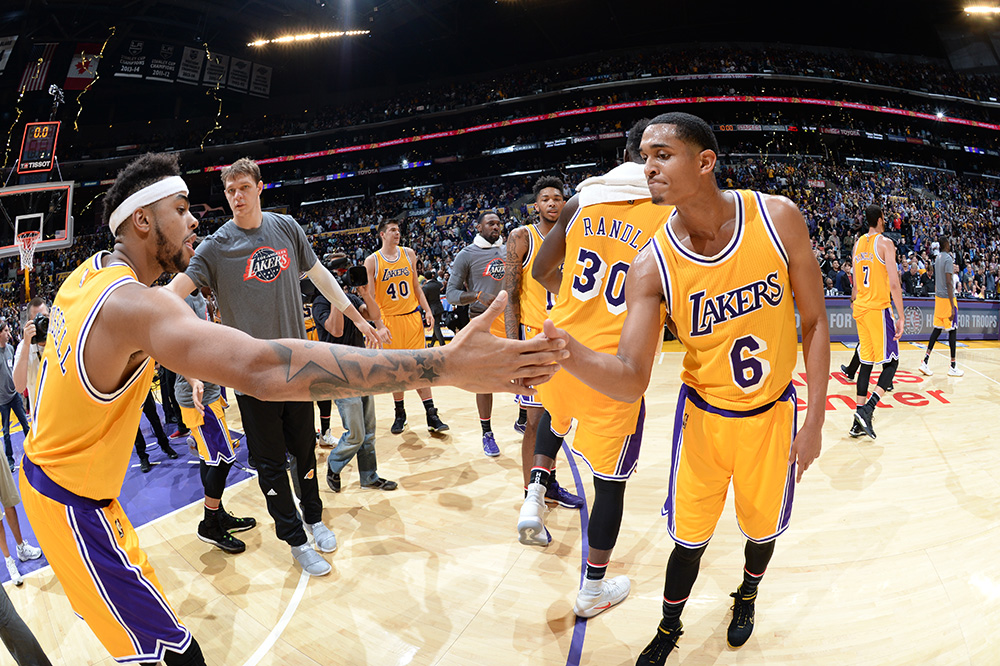 Bradley Beal owns one of the prettiest jumpers in the League and he used that as a threat to take the Hawks defenders to the rim. He ended the game with 14 free throws, connecting on 13 of those. He even rose up for a big two-handed dunk on his way to a season-high 28 points. The game was close throughout and the Wizards grabbed the W after Kyle Korver’s (1-6 from three) potential game-tying three was tipped by Markieff Morris. Dwight Howard and Dennis Schroder put up 20 points a piece for the Hawks.

.@RealDealBeal23 goes down the lane for the big two-hander! pic.twitter.com/SDDg7sW70Z

What’s good with DeMar DeRozan? Buddy’s scored at least 30 points in every game he’s played this season, racking up 34 tonight. Like he’s done since the ’16-’17 campaign started, DeRozan led the way for the Raptors with his assortment of spins and pump fakes and midrange jimmies. Thanks to Hassan Whiteside, the Heat jumped out to an early double-digit lead, but Terrence Ross came off the bench to score 20 and completely change the momentum. The Raptors were able to hold on despite Whiteside’s 21 points and 16 boards.

A game after torching the Pistons for 34, Brook Lopez came out strong again in this one. After the first, he had 12 points and two three-pointers, causing Hornets coach Steve Clifford to bench Cody Zeller for much of the night. But the Nets were without Jeremy Lin, Greivis Vasquez and Randy Foye, all of whom have at least had some experience guarding Kemba Walker. Nets rookie Isaiah Whitehead tried, and he had a pretty good game, but he couldn’t hold Walker. The Bronx-native stormed into Barclays and gave the Nets a 30-piece. Time and again he hit daggers, teasing the Nets every time they made the contest a one-possession game. Lopez finished with 18.

Dwyane Wade really put on a Bulls uniform and became a damn good three-pointer shooter. The artist formerly known as Flash went 5-7 from distance tonight. He registered a season-high 35 points and even pulled down 10 rebounds. Jimmy Butler had 26, too. But the Knicks got a convincing win in Chicago. Derrick Rose and Joakim Noah, in their first appearance as visitors at the United Center, were great for the Knicks. Rose had 15 points, 11 assists and 7 rebounds, Noah had 16 points, 9 rebounds, 4 assists and 3 steals. Kristaps Porzingis discovered his shot, putting up 27. Along with 25 from Carmelo Anthony and 17 from Courtney Lee, the Knicks took the game’s momentum. And though Rose received some boos, nothing threw him off in his return home.

Derrick Rose takes it all the way to the rim and finishes over Jimmy Butler. https://t.co/Ix1oGcj9ai

Even at 31-years-old, Chris Paul can still go. He put up a monster 27 points, 11 assists, 6 steals, 4 rebounds and 2 steals. He also became the Clippers all-time leader in assists, passing Randy Smith. Mike Conley had 30 points and 10 dimes and Vince Carter passed Elgin Baylor on the all-time field goals list, but the Grizzlies were sloppy with the ball, committing 19 turnovers.

This kid Devin Booker’s got a bright future. He had a career-high 38 tonight, demanding the ball in the clutch, hitting the shot to send the game to OT. He didn’t even knock down a ridiculous amount of triples. He operated with the ball and got to the line for 9 shots, hitting all of ’em. With help from Eric Bledsoe, who had 17, and TJ Warren, who made the game-winner, the Suns handed the Pels yet another loss. Anthony Davis and co. also started 0-6 last season. Davis had 22 and 11 in the loss.

.@TonyWarrenJr continues his strong start to the season, burying the Pels with a game-winning dunk. https://t.co/2uo6LJ8EKj

Damian Lillard is on a mission to prove himself. We at SLAM pride ourselves on knowing that Dame is a bad man, but this game wasn’t for us. This game was for people who (somehow) still doubt that it’s always #LillardTime. #0 scored 27 of his 42 points in the second half, when the Blazers needed him most. CJ McCollum had foul trouble for most of the game and the Mavs were hanging around until Lillard ended all of that, scoring 18 of Portland’s 25 points during a stretch between the third and fourth quarter. The Mavs announced after the game that Dirk Nowitzki will be out at least a week to manage a sore right Achilles. This is the first time in their franchise history that the Mavs have started a season 0-5.

The Jazz beat the Spurs in San Antonio earlier this week, getting better as that game went on. But after the Jazz started tonight’s game with a 10-2 lead, it was Kawhi Leonard and the Spurs that got better as the game went on. They hit back with a 29-7 run that effectively ended the game. Leonard continued his stellar play, finishing with 29 points on 9-18 shooting. He also had 11 rebounds. Rodney Hood had 18 for the Jazz, but he didn’t get much help.

This game looked a lot like the last time these teams met. The Warriors came out flat and the Lakers wasted no time pouncing on them. Behind Lou Williams’ bravery, purple and gold’s youngins’ used their athletisicm, height and fresh legs to punish the Dubs. The Lakers won the rebounding battle and got 64 points in the paint. They were relentless, forcing the Warriors into 20 turnovers. Williams and Julius Randle had 20, D’Angelo Russell had 17, Brandon Ingram and Larry Nance Jr. had 12. Stephen Curry’s streak of 257 consecutive games with at least one made three came to end. He shot 0-10 from downtown. Klay Thompson was 2-10 from deep. Kevin Durant scored 27 in the losing effort.