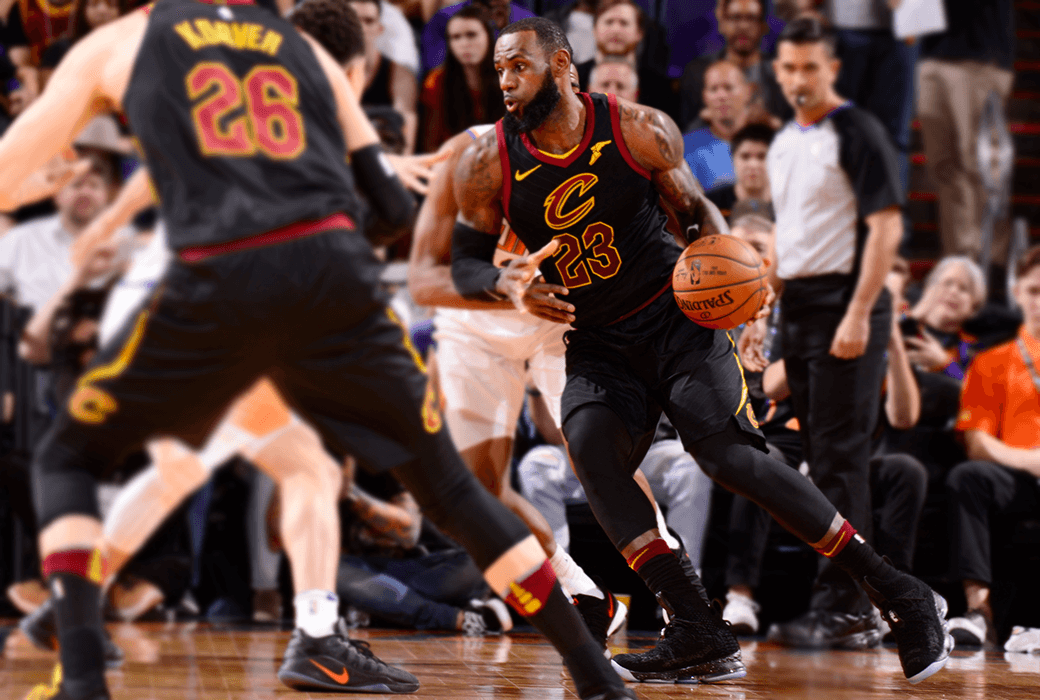 Clutch Kuz stole the show as the Lakers outlasted the Nuggets behind his 26 points, 13 rebounds and strong fourth quarter showing. Julius Randle stayed hot with 26 and Isaiah Thomas added 23 off the pine as the Lakers’ won the 12th out of their last 13 at the Staples Center.

For those keeping track of the Lonzo Ball vs. Jamal Murray beef:

Wilson Chandler led the Nuggets with 26.

Isaiah Thomas really crossed up Nikola Jokic and LOOKED BACK AT ‘EM 🙈 (via @BleacherReport) pic.twitter.com/EFeFhYVBwc

Year 15 and no signs of slowing down: LeBron James hit a career-best 14 triple-doubles in a season as he stuffed the box score with 28 points, 13 rebounds, 11 assists, three steals and two blocks.

Kyle Korver knocked down five 3s and scored 22 in 23 minutes as a starter.

Any momentum from the Blake Griffin trade seems surely lost now as the Pistons have dropped six of their last eight. The Jazz ran out to a huge first quarter advantage, doubling Detroit’s scoring with 42 points, and never looked back as Rudy Robert’s 22 points and 12 rebounds led the way. Jonas Jerekbo was a key spark off the bench for Utah as he scored 16 points and grabbed eight boards in just 19 minutes.

NAILS THE 👌🏽 FROM ANOTHER ZIP CODE (via @nba) pic.twitter.com/EzgmfSstC9

Harrison Barnes provided the scoring with 30 points and Dennis Smith Jr. put down the exclamation dunk with his jaw-dropping windmill dunk as the Mavericks rode a 26-12 third quarter advantage to victory.

Michael Beasley scored 21 points on 10-for-13 shooting from the field for New York and Trey Burke continued to shine on offense as he scored 16 points in 15 minutes off the bench.

Dennis Smith Jr. throwing it down with TENACITY at the Garden 🔥🔥🔥 (via @BleacherReport) pic.twitter.com/sjSkWuIBCT

Yep, we can add this one to the Dennis Smith Jr. reel 🎥👀 (via @dallasmavs) pic.twitter.com/ggait7oKmK

The Thunder actually trailed the cellar-dwelling Hawks at the intermission, but five 3s from Carmelo Anthony in the opening five minutes of the third quarter sparked a 21-5 Oklahoma City run that put it back in the driver’s seat.

Russell Westbrook became the fourth player in NBA history to reach 100 career triple-doubles as he grabbed his 10th rebound with less than three minutes to go. Westbrook finished the night with 32 points, 12 rebounds and 12 assists.

THE ROOK JOHN COLLINS JUST DUNKED ON THE BRODIE 😱 (via @nba) pic.twitter.com/C2pVzmPJya

Ben Simmons became the second rookie in NBA history to hit seven triple-doubles as he amassed 10 points, 13 rebounds and 10 assists, but it wasn’t enough as Myles Turner’s 25  points led Indiana to victory.

‘Dipo got a MEAN handle 👀 (via @nba) pic.twitter.com/iGmLU76VOK

Karl-Anthony Towns turned in a season-high 37 points as the Timberwolves needed to outscore the Wizards 34-21 in the final period to earn the comeback dub. Five other players scored in double-digits for Minnesota.

Jamal Crawford out here slicing and dicing up defenses like it’s easy 🤦🏽‍♂️🤦🏽‍♂️🤦🏽‍♂️ (via @Timberwolves) pic.twitter.com/RsWQukiIeS

D’Angelo Russell had Twitter poppin’ with his seven 3s en route to 24 first quarter points, but the Eastern Conference’s top dogs locked up in the final three periods as Russell’s hot hand dwindled and he scored only eight more points the rest of the way.

Jonas Valanciunas was the star of the night for Toronto as he dropped 26 points and snatched 14 boards.

The Magic went just 28-for-82 from the field and turned the ball over 20 times as the Spurs cruised to an effortless win. LaMarcus Aldridge led all scorers with 24 points.