Post Up: Kemba Walker Scores 46 As The Hornets Win By 61 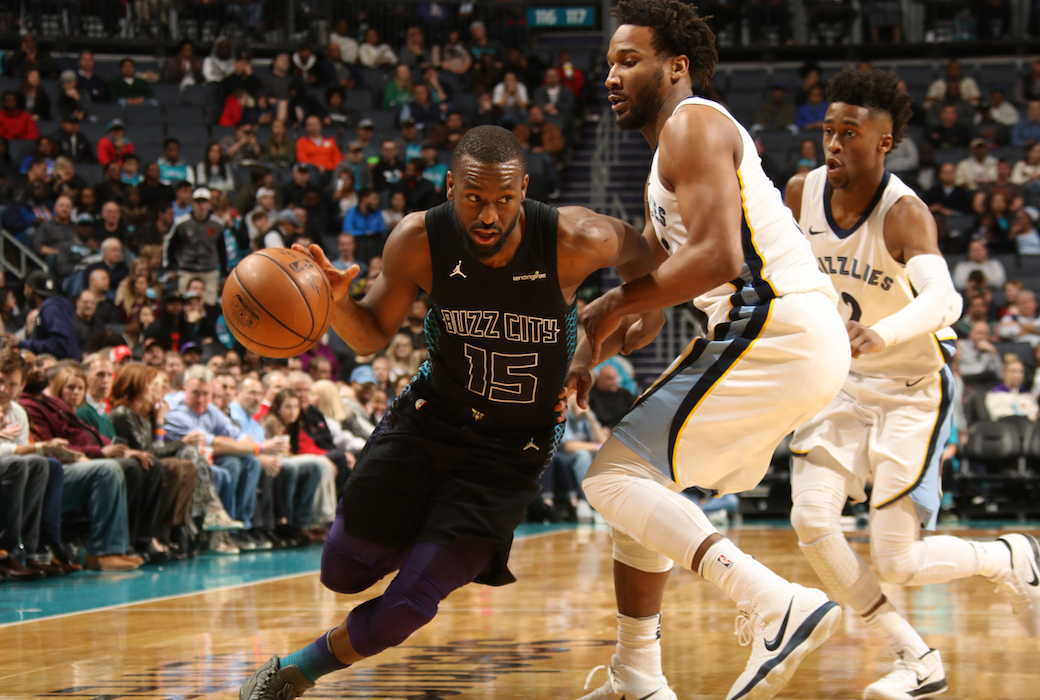 Kemba Walker played three quarters of this 61-point blowout and set a bunch of franchise records in the process. He hit 10 threes (the most by any Hornet in a single game), scored 35 in the first half (tied an all-time team best), and took over first-place on Charlotte’s all-time list with his 55th 30-point game. Walker finished with 46 points on 10-14 shooting and that was more than enough in a game that was a laugher from the start. Wayne Selden‘s 18 off the bench was a team-best for Memphis, but that wasn’t close to enough.

7 threes and a franchise record for points in a half (via @NBA) pic.twitter.com/pEORus7HkC

Joel Embiid played just 20 minutes but scored 17 points and grabbed nine rebounds in that time to lead the Sixers to their fifth-straight win. Ersan Ilyasova had 19 to lead the way and Robert Covington added 15 more. For the Magic, Rodney Purvis scored 19 points on 8-12 shooting in just his fifth career game. Orlando has now lost eight out of nine.

Houston scored 12 points in overtime and James Harden had 10 of them. On a night when The Beard struggled overall (4-20 shooting), he came through when his team needed him most as the Rockets won their seventh in a row. Harden wasn’t the only one who struggled. The Pistons shot 35 percent and the Rockets shot 42 percent. The teams combined to miss 71 threes. They shot a combined 60 percent from the line. Ultimately, it was an 8-0 overtime run that made the difference. Blake Griffin had a triple-double for the Pistons with 21 points, 10 rebounds, and 10 assists.

A Rajon Rondo layup with just over two minutes to go proved to be the game-winner as the Pelicans kept the Lakers off the board for the remainder of the game. Anthony Davis hit a pair of free throws and stopped L.A. on its final possession to seal the game. Davis had 33 points and nine rebounds and Kentavious Caldwell-Pope scored 28 for the Lakers.

Darius Miller drops it off to AD for the stuff!#DoItBig pic.twitter.com/xgZpFaFqy7

Donovan Mitchell scored 26 points, Joe Ingles had 18 points and 10 assists, and every Utah starter scored in double figures to help the Jazz to their 10th win in 11 games. For the Mavericks, it was three 20-plus-point scorers and not much else. J.J. Barea (23), Harrison Barnes (21), and Yogi Ferrell (20) combined for more than half their team’s points as no other player attempted more than six shots.

Will someone please check and see if this guy is human? 🕷️#KiaROY pic.twitter.com/h06SRS3Cjp

After a brief delay at the start of the game due to protests outside the arena, the Kings earned a hard-fought win behind 20 points from Justin Jackson. Sacramento held the Hawks under 40 percent shooting for the game, though Isaiah Taylor went 7-10 from the field and scored 18.

Vince with the slick pass to Buddy for the turnaround jumper!#SacramentoProud pic.twitter.com/jqetDCZNQg