Behind 38 points from Kevin Durant, the Warriors blow out the Cavs in Game 1. 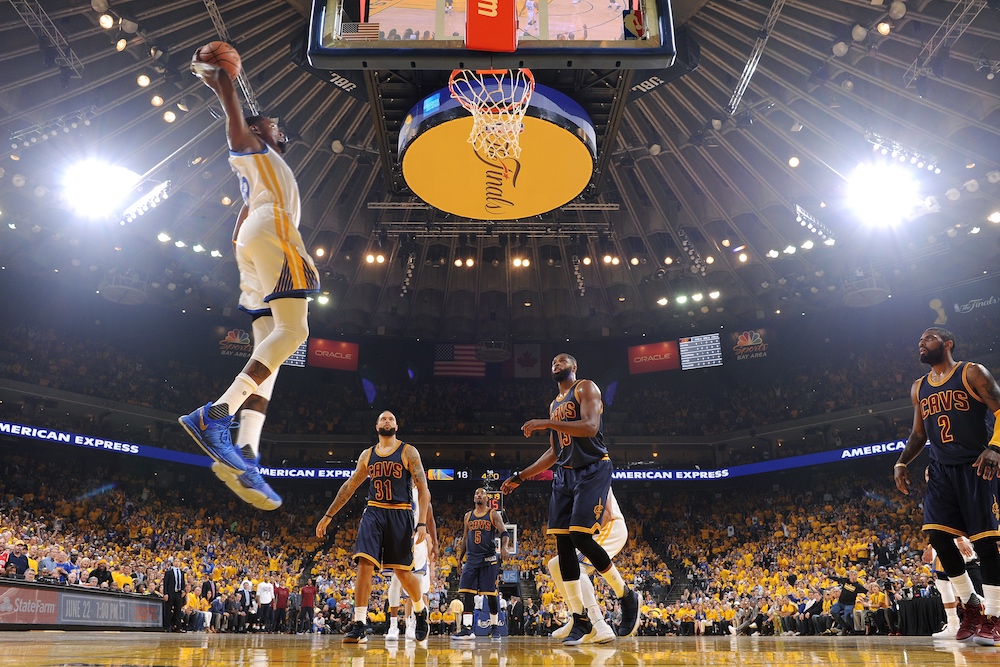 Kevin Durant‘s decision to join the Golden State Warriors continues to look better and better. After shocking the hoops world on the morning of July 4, 2016 by announcing that he was leaving Oklahoma City for the Bay Area, Durant faced intense scrutiny, a glorified beef with former teammate Russell Westbrook, “cupcake” taunts, and a new reputation as a traitor.

Now he’s just three wins away from securing the first ring of his career.

The 7-footer finished with 23 points in the first half and scored a game-high to go along with 8 boards and 8 assists.

Durant’s presence certainly caught the attention of LeBron James. When asked what he noticed most about the game, he responded bluntly with “KD.”

The third installment of Cavs-Warriors certainly lived up to the ridiculous hype surrounding the matchup in the first quarter. After both teams went scoreless in the first minute, the two squads erupted to score a combined 65 points.

Going back and forth and trading big dunks, Cleveland and Golden State were living up to the lofty expectations set by the NBA and the fans following a lackluster playoffs. The Warriors led 35-30 after one.

From there, the Dubs kept their collective foot on the gas and dominated the next three quarters to take a 1-0 series lead.

Golden State had everything clicking in the third quarter. Following Durant’s electric first half performance, Stephen Curry took the reins in the third frame, scoring 14 of his 28 to stretch Golden State’s lead to 21.

“The shift came in the first about two minutes and 30 seconds after halftime. That’s something that we have to limit going forward, especially when it’s an eight-point game,” said Irving. “We have done a good job of limiting them to certain things going into halftime, had a few too many mistakes, and then coming out of halftime they just jump on us. Great teams do that.”

For Cleveland, LeBron James and Kyrie Irving shouldered the offensive load. Bron put up a monster-yet-ordinary for him stat line: 28 points, 15 boards, and 8 assists. But also had 8 turnovers (the Cavs finished with 20 total compared to just 15 assists).

Kyrie was crafty around the rim, finishing with touch amongst the Warriors big men. He wound up with 24 points on 10-22 shooting.

The rest of the Cavaliers, however, did not give the Cavs’ two stars the help they needed. Kevin Love scored 15 points and grabbed 21 boards, while the rest of the roster scored a combined 21 points.

LeBron had a simple message on what he needs from his supporting cast following the game:

Cleveland had no answer for the offensive powerhouse the Warriors rolled out. Will things change in Game 2? Find out on Sunday night.