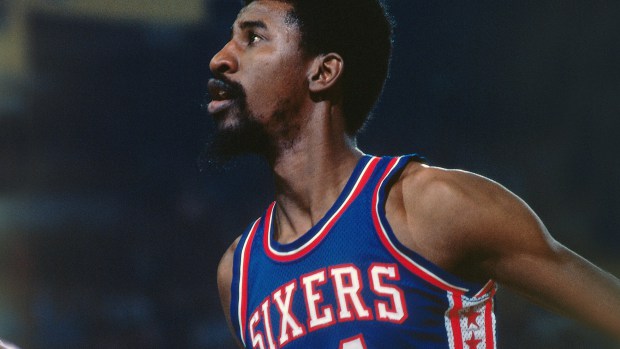 Jones played 17 seasons in both the ABA and NBA, and was a popular figure in the locker room with teammates and the media. Check out some great pieces on the man’s life from writers who knew him well in the Philly Daily News, The Oregonian and CSNNW.

It took him 1,227 games in both leagues to cross the 10,000-point plateau, never averaging double figures. But scoring and getting headlines weren’t as important to Jones as doing what was necessary.

I first met him when he was probably the least-known member of the flamboyant 76ers team with Julius Erving, Doug Collins, Darryl Dawkins and World B. Free, Joe “Jellybean” Bryant in the late 1970s and early 1980s and Jones was content to be a defensive tentpole that quietly held things up in the middle. […] “Everybody likes to look at the glory part of the game, the scoring points,” he once said. “But there is a lot more to the game. I look at myself like an offensive lineman. Someone has to open the holes for the 1,000-yard rushers.”

He loved to watch old Westerns — Lash LaRue, Cisco Kid – and cartoons — Woody Woodpecker, the Flintstones — and had a laugh that was as genuine and down-to-earth as the hardscrabble roots in McGehee, Ark. that produced the Jones clan. […] He ate chili dogs for breakfast, chugged beers in the locker room after a hard night’s work and when Oregonian reporter Dwight Jaynes once asked him to name his favorite seafood, replied: “Salt water taffy.”