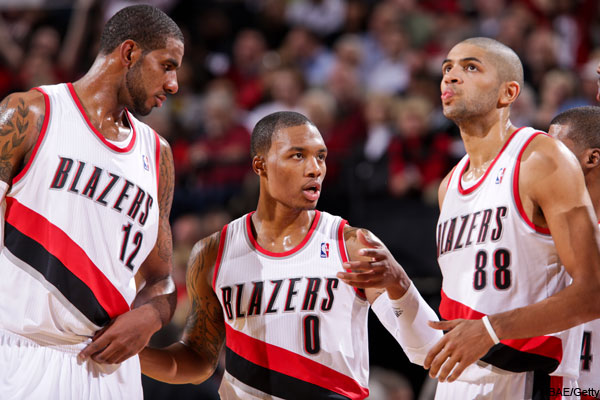 After averaging 19/8/4 in his first four games, Lillard, all things considered, had a pretty decent second week. He continued to get buckets offensively, averaging 16 a game, but had a tough time finding his teammates and establishing a flow on offense.

Lillard posted 16 points, 4 assists and 2 rebounds against the Clippers last Thursday in a game that was never really close, . Although the Blazers lost, competing against Chris Paul was surely a beneficial experience for Lillard, who matched up against Paul, Steve Nash and Russell Westbrook in three of his first five NBA games.

The Blazers rookie had his best game of the week on Saturday in a heated battle with the Spurs, scoring 20 points, dishing 6 assists and grabbing 3 rebounds in 38 minutes of play. With Tony Parker out and the game coming down to the wire, it was the Spurs—and Gary Neal’s 20 second-half points—who executed better down the stretch and escaped with a 112-109 victory. The Blazers lost yet again, but Lillard was ready for the test and performed well.

Last night against the Hawks, though, Lillard was a bit erratic. He scored 12 points on a lousy 5-18 shooting, and only managed 2 assists and 3 rebounds. The Blazers, who lost all three of their games this week, are now a disappointing 2-5.

At this point, there aren’t many conclusions to draw; we can only wait, see, and take each week for what it’s worth. There’s no denying Lillard is a gifted rookie with all the tools to become an elite point guard, but with a new coach, system, teammates and level of competition to get used to, he will surely hit some valleys throughout the year. Fortunately, though, Lillard leads all rookies with 37.9 mpg and will have the opportunity to improve in game situations.

Last week, I spoke on Lillard’s precocious ability to capitalize on what the defense offers, and praised his astute decision making on pick-and-rolls, saying:

“Lillard’s calm, cool and collected demeanor has seamlessly translated on to the court, as he is playing under control and at his own, commanding pace… He makes shrewd decisions on the pick-and-roll—knowing when and how to attack, and knowing when to pull it back and regroup… The true beauty of his game lies in the eye test; watching him run the pick-and-roll to perfection, break down his defender with a Gary Payton-like mean streak, consistently set up LaMarcus Aldridge for his automatic elbow jumper or dish to Nic Batum/Wesley Matthews in the corners.”

While I tried my best to convey my point through words, to me that paragraph was unfinished, because I felt I needed some sort of visual to corroborate my observations and better explain.

Well, thanks to the basketball junkies on YouTube, two videos surfaced this week that show Lillard’s brilliance on the pick-and-roll:

As the videos above show, DLill is filthy. His handle in tight enough that he can hesitate until the last possible second to make a decision on whether to pass or shoot—thing is, once he’s in this position he’s already won the battle because the defense is now frozen and out of sync. And because defenders have to respect his mid-range jumpshot, his pick-and-roll becomes virtually unstoppable once he creates even an inch of separation.

For example, let’s observe two sequences from the first video:

In the screenshot above (from start—0:03), Lillard uses a stutter-step hesitation to freeze Patrick Patterson. At this point, Patterson can’t tell whether Lillard is going to stop and pull-up or dish it off. The thing is, Patterson shouldn’t be able to tell, because he will actually dictate what Lillard does. If Patterson hedges toward LaMarcus, Lillard will take it upon himself to score. But if Patterson steps toward Damian, which he does in this clip, Lillard will hit Aldridge in his sweet spot for an open foul-line jumpshot.

Lillard’s command of the pick-and-roll can legitimately reach a Tony Parker/Chris Paul level, which is a scary thing for the League. Unlike Paul and Parker, though, Lillard is a better athlete and can dunk through the lane, making him that much more deadly.

Let’s observe one more sequence, again from the first video. This time the clip is from the 0:07 to the 0:15 mark:

After a first attempt at a pick-and-roll with LA, Lillard is not pleased with the result, so he decides to regroup and give it another shot. Good decision.

In Frame 1, Lillard uses a quick first step to get around Jeremy Lin, which leaves Patterson in a very tough situation before the play has even developed. It should be mentioned that if the point guard—in this case Lin—could fight through the screen, then it’s possible this play won’t work. But so far this season, Aldridge has set good screens and Lillard has maximized them, and even the slightest amount of separation can be tough to recover from.

When he arrives at Frame 2, Lillard is already a step ahead of the defense and again freezes Patterson—and Houston’s defensive rotation—with a hesitation move. He trusts that Aldridge will smoothly roll into his soft spot, and begins to prepare the on-the-money pass.

At Frame 3, the play is pretty much over at this point, as Aldridge has an uncontested jumpshot. But I included this frame to show how a successful Lillard pick-and-roll creates even more problems for a defense. The initial screen got Aldridge open, and now if the weak-side defender—in this case James Harden—rushes to Aldridge, the corner man (in this case Wes Matthews) will be wide open for a corner three, which we see in Frame 4.

Damian Lillard may be young, but his pick-and-roll is already lethal and, I think we can all agree, a thing of beauty.

After missing two games with a concussion, Davis returned for last Friday’s matchup against former college teammate Michael Kidd-Gilchrist and the Charlotte Bobcats. Davis played 37 minutes and recorded his first double-double of his career, scoring 23 points and grabbing 11 rebounds to help NOLA secure a 107-99 victory.

Toward the end of the second quarter, Davis got into a small scuffle with Bobcats center Byron Mullens. It was nothing serious or malicious, but it was nonetheless pleasant to see Davis get a little physical. The best part, though, is how AD responded—he scored 18 of his 23 points after the scrap.

There we go, MKG. After a so-so first four games, Kidd-Gilchrist had a career night last Friday against the Mavs, scoring 25 points to go along with 12 rebounds in a dog-fight overtime victory. Kidd-Gilchrist logged 41 minutes, and impacted the game time and time again in crunch time.

MKG was an efficient 8-12 from the field, and in what was basically a one- or two-possession game for the last 15 minutes, he came down with several crucial offensive rebounds, which ignited fast breaks and gave Charlotte the lead. Kidd-Gilchrist and Kemba Walker showed great chemistry and leadership together, and really set the tone for the game. The game may only count as one win in the standings, but there’s no doubt it resonated much deeper in Charlotte. Last Friday showed us that Michael Kidd-Gilchrist is a fearless competitor who is capable of imposing his will on the NBA level.

Arguably the most potent scorer in the rookie class, Waiters didn’t manufacture another seven 3-pointer game but still had a solid week. He scored 12 points and dished 5 assists against Golden State last Wednesday, and had 8 and 4 this past Sunday against the Thunder.

The highlight of Waiters’ week came last Friday at Phoenix, where he scored 12 of his 23 points in the fourth quarter, including a stretch where he scored 10 straight points and gave the Cavs the lead twice in the final minutes. It was a horrid effort by the Cavs, who were defeated after relinquishing a 26-point second quarter lead, but on an individual level Waiters continued to get buckets. Going forward, we can expect Waiters to score, but it would be nice to see him consistently record 4 or 5 assists per game as well.

After a very quiet opening week, Beal finally showed us why he was the No. 3 pick in last June’s NBA Draft. He scored 16 points (3-8 from three) against the Celtics last Wednesday, and then followed with performances of 22 points/4 rebounds/2assists and 17 points/6 rebounds/2 assists against the Bucks and Pacers, respectively. Beal has shown he’s nearly automatic from the free-throw line, and he is starting to pick up his shooting stroke, going 3-3 from deep vs Indiana. Averaging 30 minutes per game, Beal is getting the second-most burn among all rookies.

— Through seven games, Timberwolves guard Alexey Shved is doing a solid job backing up Luke Ridnour. The 6-5 combo guard from Russia is averaging 8 points, 4 assists and 3 rebounds in 23 minutes per. In last night’s victory over Dallas, Shved scored a weird 16 points, going 3-12 from the field but 9-11 from the free-throw line.

— Mavericks forward Jae Crowder has started the past four games, averaging 7.1 points and 2.4 rebounds in 20 minutes per. He’s also shown remarkable improvement on his jumpshot, which the “undersized forward” wasn’t known for in college.

— Pistons forward Andre Drummond had the best game of his young career last Friday at Oklahoma City, scoring 22 points and grabbing 8 rebounds in only 21 minutes. He also went 6-9 from the foul line. Good stuff, Dre.

— Raptors center Jonas Valuncianas posted averages of 10 points and 4 rebounds in four games this week. His best game was last Tuesday at Oklahoma City; Kevin Durant baptized him, but along the way Valuncianas scored 18 points and grabbed 6 rebounds.

— Some injury updates: Hornets guard Austin Rivers, who is averaging a hefty 29 minutes per game, rolled his ankle at shootaround yesterday but is expected to start tomorrow against Houston. On the flipside, Cavs rookie Tyler Zeller, who suffered a concussion last Monday against the Clippers, is definitely out tonight vs the Nets, and has no timetable for a return.